You are here: Home / Culture / Music / Neighbourhood Weekender: The 5 Unmissable Acts You Need To See 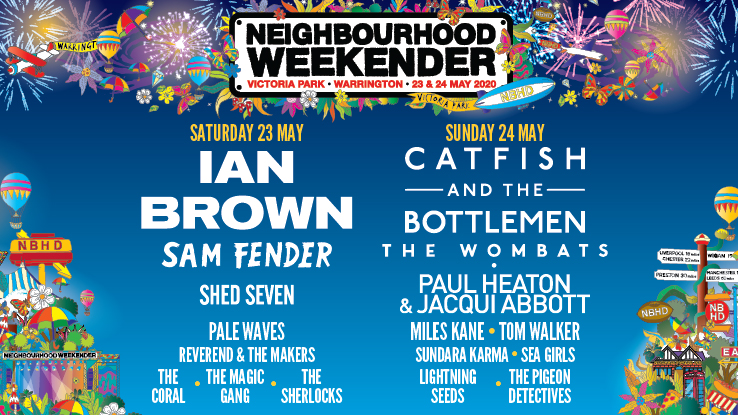 It may still only be Christmas and summer seems like lightyears away, especially as you sit next to the fire with ‘The Grinch’ blaring on the television, but with the recent announcement of the setlist for Neighbourhood Weekender (which will be taking place on the weekend of the 23rd and 24th of May 2020), it’s time to start looking forward to the upcoming festival season.

With artists such as George Ezra and Richard Ashcroft topping last year’s bill, it may have seemed impossible to beat. However, this year they’ve managed to bag not only Ian Brown, Catfish and The Bottlemen, Sam Fender and now The Wombats to potentially create the weekend of your year. This star-studded Bank Holiday celebration of talent showcases both the established acts in the indie world, as well as the exciting fresh talent you need to see such as alt-rock heroes Inhaler and indie-pop legends Fickle Friends.

Inhaler will be making the trip from their native Dublin to Warrington for the festival, crossing both land and ocean to bring their new stamp of rock revival to the stage. Defined by their parents’ vinyl collections their tracks mesh old-school dirty rock, with modern psychedelic melodies. They’ve proven by their music alone they deserve all the acclaim they’re beginning to receive, and don’t require the need to rely on lead vocalist Elijah Hewson’s father Paul Hewson (a.k.a Bono Vox) lead singer of U2 for support. The Stone Roses inspired band has previously supported Noel Gallagher and are therefore no stranger to making the larger venues their own. Their dreamy latest release ‘Ice Cream Sundae’ is the perfect track to introduce you the four-piece.

Despite naming themselves ‘Fickle Friends’ this band is anything but ‘fickle’. Seven years into their time as a band they’ve stuck together and kept to a synth-pop sound which is so uniquely theirs, it’s instantly recognisable. Catchy and feel-good they embody the festival spirit. The Brighton based five-piece has been backed by prominent figures such as Jack Saunders and Huw Stephens. Also, their debut album You Are Someone Else gaining a Top 10 position in the album charts, it’s not just those two who are fans of the band. Track ‘Hard To Be Myself’ is a party anthem honing in on insecurity, with a sparkly overlay. Newest track ‘Amateurs’ is dripping with synth and is a great introductory track showing their progression as a band.

This band is going more places than just Warrington next year both literally and metaphorically, however, it’s a great place to catch this rising indie on their ascent to stadium status. The London based four-piece has been touring all over the UK, passing their 100th gig in July, and have released a few successful E.Ps but are taking their time before releasing their album- undoubtedly making each work their best yet. Each track is a melodic hit and the type of song which easily lends itself to be played best at full volume while dancing and singing to it as loud as you can. This indie-alternative band was made Annie Mac’s ‘Hottest Record In The World’ for good reason. It oozes fanciful festival vibes with the chorus “Won’t be leaving here without you/ V-I-Oh my God, Violet” you’ll have to join in. They may have been inspired by iconic bands such as Foo Fighters and The Killers, but this band is an enigmatic force of their own making.

How to describe an enigma like Sam Fender. If you haven’t heard his name, you’ll surely have heard his tracks blaring through every radio speaker in close quarters. Originally from North Shields, however, he has made his home inside many of his fan’s hearts. He successfully combines his penchant for creating an indie-rock hit, with lyrics honing in on the social issues surrounding us. He’s a much-needed voice for modern music who legitimately believes he can change the world with his guitar. His chart-topping debut album Hypersonic Missiles contained tracks which maturely put a spotlight on both male suicides in ‘Dead Boys’ and one night stands in ‘Will We Talk’. The BRITs Critic’s Choice 2019 winner is known for his atmospheric performances, and his festival appearance will be no different.

5. Catfish and The Bottlemen

Welsh headliners Catfish and The Bottlemen are no stranger to the limelight. Over the past decade, they’ve been paving the way for the future of indie-rock. Debut album The Balcony was certified platinum and was successfully followed up by gold-certified album The Ride. They say all good things come in threes and latest album release The Balance, certainly proved this and they’ve got even more to give. From having embarked on a sold-out arena tour to numerous festival appearances all over Europe, they’re more than worthy of being at the top of the bill at Neighbourhood. Despite all of their achievements, their music remains relatable and shows they aren’t ones to rest on their laurels. Memorable guitar riffs which mesh with Van McCann’s vocals and perfectly penned lyrics, leave any doubt surrounding their fame. ‘Kathleen’ is a classic Catfish track for good reason and will be the quintessential summer track to sing-along with.

Whether your dream is accompanying your idol Sam Fender on vocals or finding your new under-the-radar fave, you can complete it at the upcoming Neighbourhood Weekender. The community spirit surrounds each of the three stages, and make sure to grab your tickets so you can catch each of these artists. You won’t be disappointed. If the only thing stopping you from attending is transport, then coach packages are also available with Big Green Coaches. No excuses now, see you in the mosh pit.