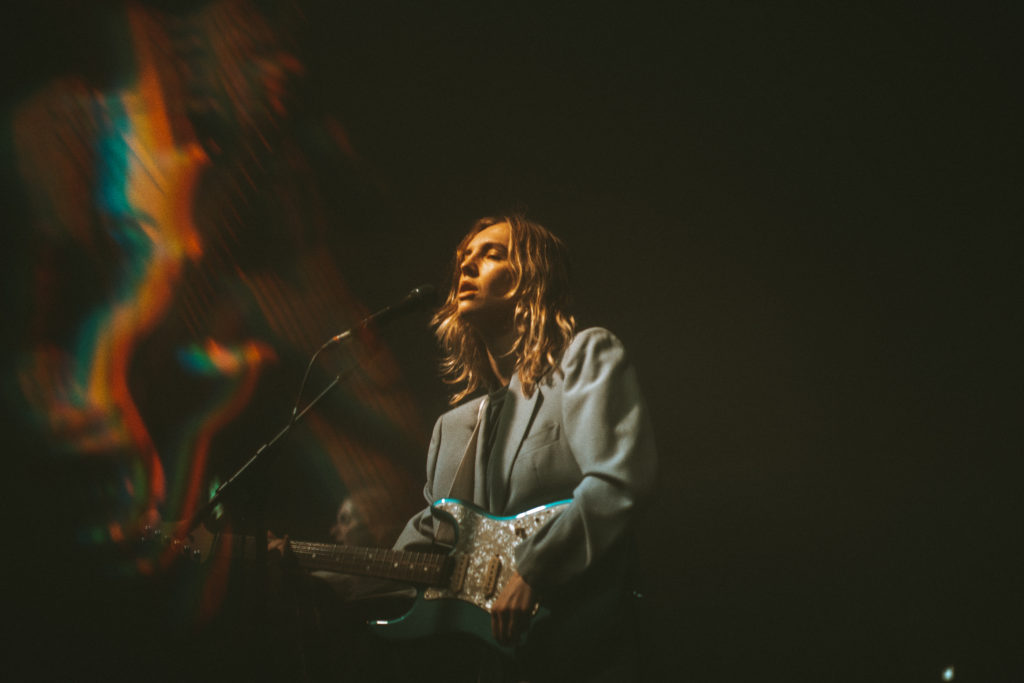 Words and photography by Lucy Tibbs

Transforming the O2 Ritz into a safe space for deep melancholic contemplation whilst simultaneously seducing the crowd into a state of bottomless reverie is no easy feat, but that is exactly what The Japanese House accomplished.

The Dirty Hit artist was returning for the first time to the city since March 2019, with Manchester being one of the three lucky places to be visited by the solo singer/songwriter before the Christmas period.

The support band, Fake Laugh (aka Kamran Khan), who released his solo debut album back in 2017, opened the evening with his dream-like indie-pop sound. Khan set the tone of the evening with nostalgic, light guitar sounds complemented with impassioned and warming lyrics. Gently swaying in harmony with the artist’s mellow songs, the crowd seemed fairly content throughout his set, but it was only the beginning. Back on stage only a few minutes later, the London-Based artist reappeared in The Japanese House’s touring ensemble, swapping his guitar for the bass.

Emerging moments after the band had taken their places, Amber Bain took centre stage, which sent a surge of cheers into the atmosphere. The smoke that was pouring off the stage combined with the mass of light flooding from above illuminated the indie-pop icon like a heavenly being. The 2016 electro-pop single ‘Face Like Thunder’ initiated the evening with industrial sounds reverberating around the former dance hall’s hollow ceiling. The pensive tone of Bain’s lyrics and resonated sounds lead listeners immediately into a daze of deliberation.

The setlist was jam-packed full of treats which took fans through old favourites, such as ‘Somebody You Found’, as well as fresh tracks from her recently released debut album Good at Falling, one that can only be described as an attentive reflection on the process of falling both in and out of love. The structure of the evening was a pleasant surprise for everyone and was well received.

It was clear everyone anticipated that there would be a heavy focus on the new content, so the mixture of old and new was unexpected, but a comfort for those who had never seen her before. The first half of the set sent out a very melancholic and despondent tone into the crowd, whereas the second half lifted the spirit of the venue, creating a surge in movement and noise from front to back. A juxtaposition executed to perfection, with the audience experiencing a whirlwind of emotions as the evening developed.

‘I Saw You in A Dream’ saw the crowd at their most vocal; reiterating every word that spilt out of the singer’s mouth. The tender ballad, with its soft expressive lines, is clearly a fan favourite. Written following the death of a friend, the song clearly encapsulated the singer. Immersed in the song’s performance, she was undoubtedly elated to see so many people reiterating the words to the love-song that she had written.

Bain kept the crowd on tenterhooks, reiterating that ‘this is going to be our last show for a while’, creating an uneasy tension among the fans. At this point, everyone was praying that this meant Amber would imminently be entering into a form of hibernation in a recording studio, but a slither of doubt also plagued their minds, with worries over a potential break for the young artist. We’re all hoping that new material is just around the corner.

Nevertheless, the echoing phrase made the evening seem even more touching knowing that it would be the last, at least for a while. ‘Something Has to Change’ concluded the evening, providing a slight upbeat shift from its predecessor Worms. The final song of the evening left the crowd optimistic, with the hope that The Japanese House would be returning with new content from a changed perspective, hopefully in the not too distant future.