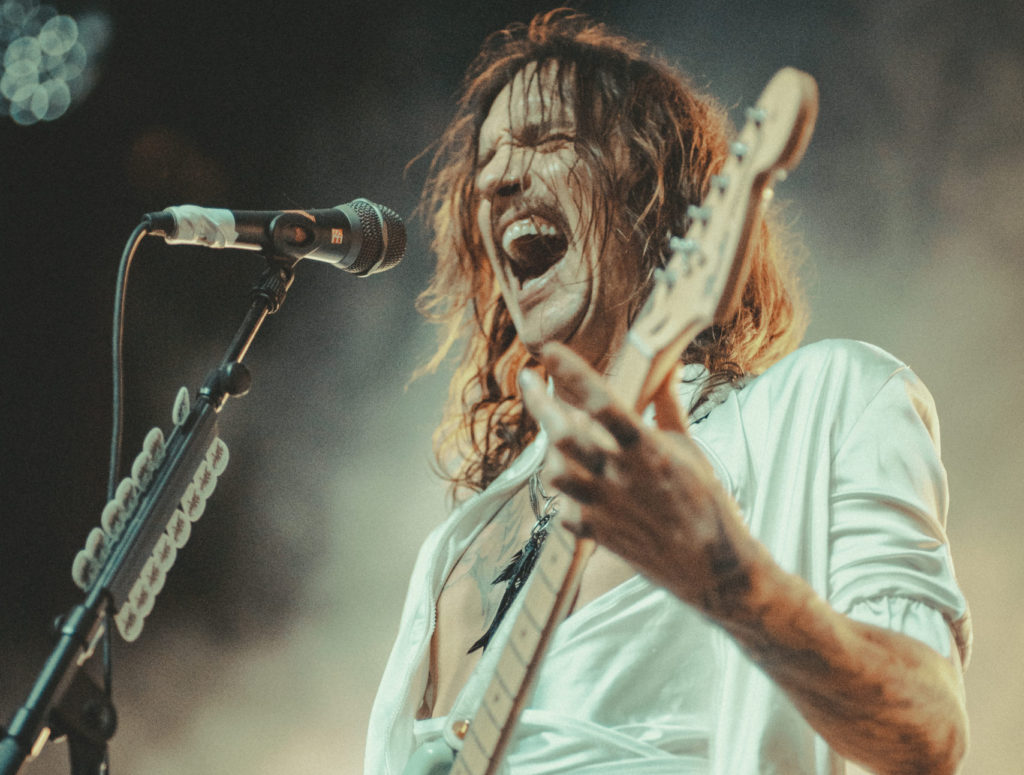 Words and photography by Lucy Tibbs

Seeing The Darkness in the lead-up to Christmas feels essential, considering the fame of their festive number 1 – ‘Chrismas time’. Travelling around the country on their Easter is Cancelled tour, the four-piece rock band crashed onto the Manchester Academy stage unveiling their latest hits and revisiting some of their earlier tracks.

Joining them on tour, Irish duo Rews opened up the evening with a rumble and performed some of their solid hits, such as ‘Rip Up My Heart’ and ‘Can You Feel It?’. Injecting their energy into the crowd, the alternative rock assembly threw their bodies around the stage at every opportunity, emphasizing the might that oozed from their music. It was empowering to see two women conquer the stage with such a reckoning force and completely spellbind the audience with their crisp and compact sound.

The buzz in the room was building with anticipation as the support act slid off-stage. The stage lights dipped once again and The Darkness, adorned in overpowering white outfits, strutted onto the stage, beginning with ‘Rock and Roll Deserve to Die’, a track off their new album Easter is Cancelled. Everyone’s eyes were darting around the stage, waiting for the front-man to dash out. Just as the crowd was getting used to the gentle ambience of the introduction, Justin Hawkins exploded onto the stage and the song snapped into life. It was like someone had set off pyrotechnics within a confined space; the stage just wasn’t big enough for the vivacity of the singer’s chaotic movements. The more he moved, the more the crowd chanted his name, fueling the vocalist’s erratic performance even further. The first half of the show continuously enthused the crowd, as The Darkness took them through almost the entirety of their latest release.

Yes, you heard that right: ‘first half’. The Darkness has so many songs they had to split their set list in two. The second, entitled ‘Greatest Hits’, did exactly what it said on the tin, starting with ‘One Way Ticket’ and finishing with ‘I Believe in a Thing Called Love’, a song that most probably turned up to hear. All in all, sounds like a fantastic night, right? Well, it got even better.

After their set was over, the Lowestoft lads returned onstage only to dish out a rather large serving of Christmas spirit, concluding the night with the fabled ‘Christmas Time (Don’t Let the Bells Ring)’. It was the high moment of the gig, signifying the start of the Christmas festivities and bringing Manchester together just when it needed it.