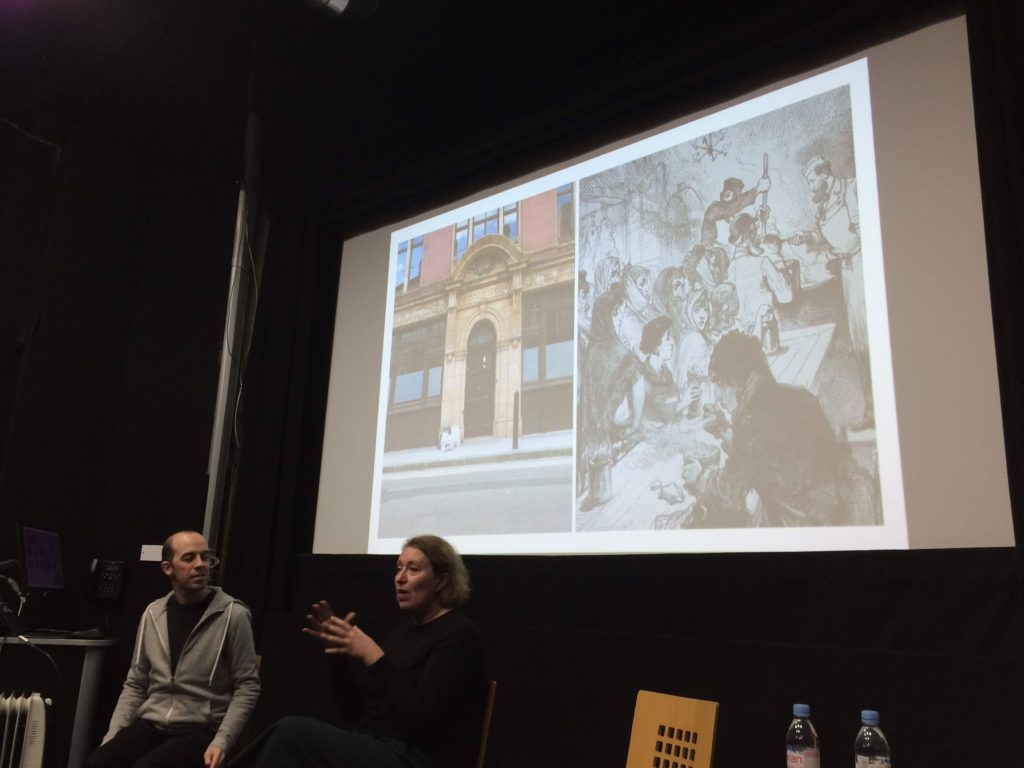 “This project has developed through a lot of conversations and it’s been a very joyous thing to be working on,” said author and archivist Rachel Lichtenstein.

Lichtenstein joined Dr Duncan Hay at Manchester Metropolitan University to present the collaborative project ‘Memory Map of the Jewish East End’. The evening was structured a relaxed discussion about the connection between memory and place, with both presenters offering fascinating insight into their work.

Lichtenstein has written a variety of award-winning books on place and memory through the lens of investigating Jewish identity, while Dr. Hay is working with Survey of London, a comprehensive architectural survey of London which is currently administered by University College London. He’s also developing the site on which Memory Map of the Jewish East End will exist once it is released to the public.

The project aims to bring together a selection of documented research, academic insights and individual’s recollections to paint a picture of 19th and early 20th century Whitechapel, the centre of the Jewish community in London at the time. The information, which will include photographs, voice recordings and videos contributed by both experts and members of the public, will be documented on Survey of London Whitechapel’s webpage.

Once it goes live, members of the public will be able to browse the interactive map, selecting individual buildings to learn about their precise history within the Jewish community. Excitingly, every building in Whitechapel has been mapped.

One area of the project which received particular thought was how to appropriately combine the different forms of research into a coherent piece of work when there’s so much history embedded in a place.

Dr Hay said, “There’s a lot of what you may call ‘amateur’ discussions about family history happening on Facebook. The editors of Survey of London Whitechapel spend a lot of time on Facebook at work trying to convince people to upload their photographs and to tell the stories they’re telling in this informal setting on a more formal platform. It’s been a real challenge.

“The tension between the official and unofficial history is somewhat unresolved. One of the things that occurred to us is that maybe we should have not one map for these things, but multiple maps.”

As a result, the Memory Map of the Jewish East End was born and marked the beginning of Lichtenstein’s involvement.

Lichtenstein explained why she joined the project: “You’re talking about an area where there was once 150 synagogues in almost a square mile, and now there is one left in Spitalfields and three still functioning in the East End. I feel so passionate about this story being told and for some reason it still isn’t. I find it astonishing.”

Part of Lichtenstein’s work involves creating a museum centred on the Jewish East End, to be situated in the area.

“We’re so behind the times. You go to Amsterdam, you go to Berlin, you go to Venice, all these other cities where you have a Jewish museum on site. In Manchester you’re lucky enough to have that in a functioning synagogue. That is the model for what we’ve been trying to create in Sandys Row Synagogue [in the East End].

“So many of these places have shut down. In the time I’ve been working in that area I’ve seen almost all tangible traces of that heritage just disappear, close down, shut down, turned into something else. There’s hardly anything left. And how do you tell that story if you don’t have a physical museum?”

One way is this project – the Survey of London Whitechapel’s mapping site allows yourself to immerse yourself in the area and architecture, even if you cannot physically visit.

An audience member raised the importance of this, querying whether the site could end up creating new connections and links that perhaps wouldn’t get by made collecting and sharing stories in another medium.

“It’s a nice idea for a younger generation to sit with an older generation and they can show them around the area and visit the sites themselves through the project.”

You can find out more about the project here.