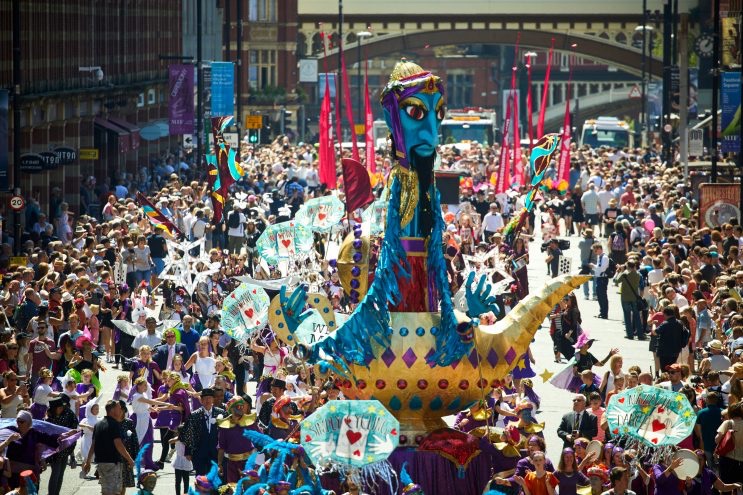 The theme for this year’s Manchester Day, which will mark its 10th anniversary, has been announced as ’10 out of 10′.

The event is described as “an annual event that celebrates everything great about the city. It is a day for families, residents and visitors to get together and celebrate all things Mancunian that have made Manchester one of the world’s most iconic cities.”

Taking place on Sunday 23rd June, Manchester Day 2019 will invite back participants from past celebrations to commemorate the anniversary.

The event is family friendly and will run between midday and 6pm.

The people, culture and industry of our city will be celebrated during the celebrations. The event itself will feature dance, theatre and music, and will be spread out across St Ann’s Square, Albert Square and Cathedral Gardens.

Liz Pugh, Creative Producer, said: “We’ve now reached 10 incredible years with Manchester Day which is why our ‘Ten out of Ten’ theme is designed to give our community groups the chance to celebrate who or what they want to give top marks to in this great city through their creative entries to this year’s parade.

“As usual, the theme will be extended to an exciting programme of events taking place in St Ann’s Square and Cathedral Gardens and we’re really excited to see the whole thing come together as the day unfolds.”

Sustainability has been a key issue since the inception of Manchester Day, and this year will see a continuation of the tradition. Petrol vehicles are banned from the event, and organisers use recycled materials as far as possible.

There’s plenty of ways to get involved in Manchester Day 2019. If you want to be part of the team of volunteers keep an eye out for announcements on Twitter, Facebook, Instagram and also take a look at the Manchester Day website for further details.

Interested in joining the aAh! and Northern Quota Media team covering Manchester Day? Get in touch and register your interest. Email the team at aAh.Editor@gmail.com