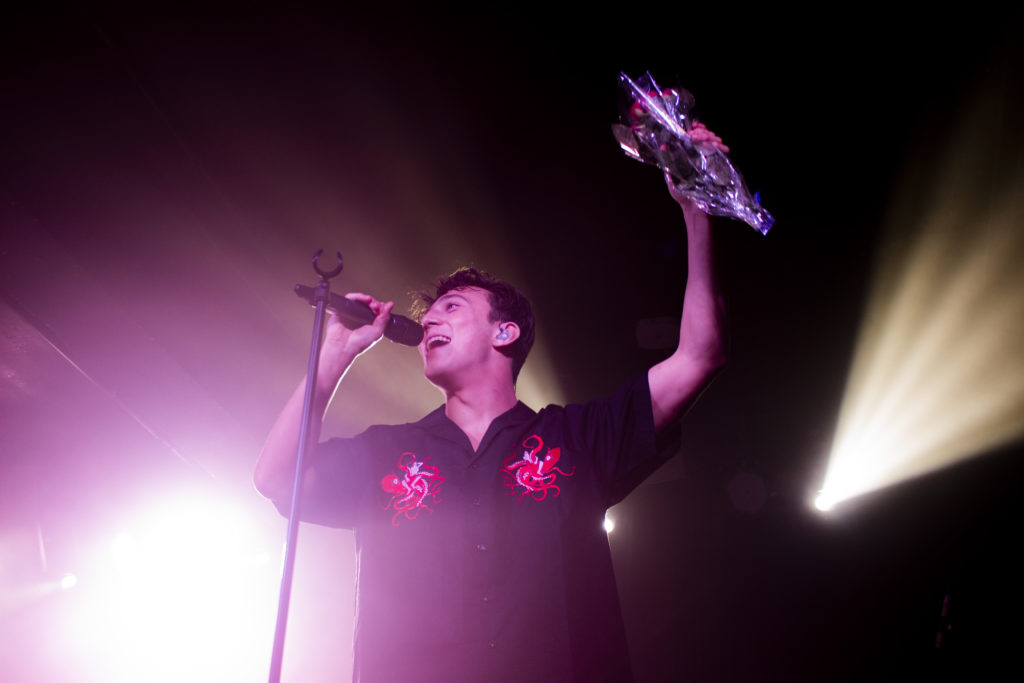 The Club Academy provided the perfect backdrop for Zak Abel’s ‘Date Night Tour’. Dark, small and intimate, with the barrier close to the stage, it combined oddly well with a playlist jam-packed full of the cringiest and corniest throwback hits. ‘Magic’ by Pilot and a dash of Dolly Parton warmed the audience up nicely, while calming purple and blue lights set the mood.

Londoner Hollie Carmen strutted on stage to the sound of applause, the air high with anticipation. Followed by a single keyboardist, all focus was on her, as she shone in a single spotlight, the light catching on her tulle jacket. Leather boots and skirt with scraped-back hair, she exuded classic Hollywood glamour. This should come as no surprise, given that the inspiration behind the soul side of her music derives from legends such as Otis Redding. Combining this with the essence of modern artists such as Dua Lipa, however, Carmen’s sound manages to stay fresh, without losing the emotive soul element at its core.

From the first notes of her first song, ‘Moonlight’, the audience witnessed her soft and easily carrying vocals, and were enchanted by the blue halo that seemed to glow around her hair. This was followed by ‘Never Thought I’d Be That Girl’, the next addition to her new EP, Plan B, which was released on the 20th of March. As she sang the opening notes, backed up by the sound of twinkling keys, she was truly entrancing. She used this opportunity to invite the audience to join in by singing along with the words “never thought I’d be that girl”, and they seemed only too happy to oblige. If her raw lyrics about trying to leave a failing relationship hadn’t already struck a chord with the audience, her exclamation at the close of the song that “every audience member sounded beautiful” would surely have sealed the deal – flattery will get you everywhere.

It also quickly became apparent that Carmen is a modern face of female empowerment. Every single one of her songs offers a raw reflection of who she is, and what she stands for as a person. It is shown most clearly through her final songs of the set, ‘Plan B’ and ‘This Song’. These two songs combined easily placed her at the forefront of contemporary feminist songwriting, which it would seem Carmen actively sought to achieve, announcing that ‘Plan B’ was for anyone who has ever felt like an option, a message of empowerment for herself and others. She carried this off excellently, strutting around the stage, her voice fuelled by spirit as she sang that she’s “never gonna be anyone’s plan B.” Quite right too – and this attitude carried into her final song of the night, ‘This Song’.

As the lights went down, only a single pink spotlight remained, leaving Carmen looking ethereal in the darkness. The song captured the final piece of Carmen’s journey in navigating difficult relationships and finding peace, which the audience seemed delighted to have shared with them. As the lights came on, they seemed in a sense a visual metaphor for her realisation as she sang the powerful lyrics “so tell me, do you like this song? Do you miss me now your power’s gone?” It became obvious that Carmen is a force to be reckoned with, as she isn’t afraid to strip away a facade and present an authentic representation of herself. Although the audience only received a few bite-size chunks of her sound, her characteristically soulful and poetic lyrics and her edge of attitude were more than enough to whet their appetite.

As soon as Rika entered the stage, flanked by two identically dressed back up dancers, it was clear that the time for dancing had arrived. Her set was a combination of originals and covers. It was also entirely produced electronically, which meant that Rika was at the centre of everyone’s focus, and she had the entire stage at her command. The audience were cheering from the upbeat and catchy leading track, ‘I Wanna Know’. Every element of the set was a performance, from the star-spangled trousers donned by Rika to the perfectly synchronised choreography. One of the largest shocks of the evening was realising that the singer-songwriter was only 18. In the first five minutes of her set, it was already obvious that she had acquired stage skills beyond her years.

In spite of her masterful theatricality, Rika’s next song demonstrated that she didn’t require the company onstage or a sparkly stage outfit to shine. Her cover of Rihanna’s hit track, ‘Love On The Brain’, brought the tempo down and heightened the attention on her voice. She made the track her own and pointed at the audience, singing without the mic stand as she belted out “don’t stop loving me”, her powerful voice full of emotion. After every track, she was clearly taken aback by the raucous applause of the crowd. ‘On My Way’ brought the tempo back up again, accompanied by the return of her backup dancers. It was written with the vibes of having a good time in mind, and this translated into the performance well.

‘Someone You Loved’ by little known artist Lewis Capaldi gave Rika another chance to showcase the full capabilities of her lungs. Standing with her hand on her heart, belting out “and you’re not here to get me through it all,” was an emotional sight to behold, as she stood alone on stage with a single spotlight trained on her. It wasn’t just the audience who were emotionally moved – at the close of the song, Rika was left fanning her face, exclaiming that she “was about to cry” and that “it was amazing to the see the audience singing”.

Her final song of the night, ‘Crystallised’, is a song which champions living in the moment – something that we all forget the importance of from time to time – all tied up with the return of an electronic fusion of a pounding beat and outstanding dancing. As she sang the last note and lights flashed, it was obvious that this uncanny Dua Lipa doppelgänger will follow suit not just in her appearance, but in the trajectory of her career. It seems undeniable that Rika will follow in the footsteps of Dua Lipa’s success, as she easily brought the arena atmosphere to this intimate venue.

Aesthetically reminiscent of one of the main kneelers at the font of love and music, Elvis Presley, Zak Abel was the perfect man to put on ‘Date Night’. The music and lights cut out as a voice boomed on the loudspeaker: “ladies and gentlemen, welcome to date night, a place we can be unstable together. Everybody needs love – tell them they come first.” It had already been established that the crowd were a lively bunch, ready for a singalong. This is something which Abel used to his advantage as he took to the stage and, to raucous applause, opened with ‘These Are The Days’, a high electronic and funk driven track with simmering drums, backed up by Abel’s signature moves.

The charismatic singer was rewarded with a bunch of roses from a member in the crowd, which he gratefully placed down before storming into his next track, ‘Running from Myself’. The intro was upbeat and reminiscent of a heist, as if Abel planned to steal the hearts of all the people present. With everyone dancing, the band members’ grins suggested that they knew they were doing something right, and this energy carried into ‘Say Sumthin’.

Abel’s performance of self-professed favourite track to date, ‘Holding Back The Years’, was a real treat for the audience, as it was the first time Abel had ever showcased it live. Beginning as a slower number, it turned highly electronic as the drum kicked it. Abel closed his eyes while singing, his voice dripping with emotion. The song faded out with the words “that’s all I have to say…” and once again, the audience delighted in the opportunity to explore Abel’s thoughts through his music.

‘Soulchild’ saw Abel adding a bit more action to the set, enticing the crowd to join in by snapping their fingers, keeping audience interaction central to the show. Despite Abel declaring that it’s “been a minute since I’ve been on tour” and that he was “still getting back into it“, his performance was as clean and polished as ever.

The beautifully sentimental ‘Everybody Needs Love’ was next on the set list. The crowd waved their arms to the melody and mimicked the shape of a heart with their hands, shouting how much they loved Abel, while the lights faded to pink. ‘Love Song’ took the pace down further, and continued the theme of Abel pulling on the audience’s heartstrings as he crooned that he just wants “to be loved” while sitting on a stool, accompanied only by keys to deliver a stripped-back, intimate performance. The crowd swayed, their phone lights appearing like stars in the dark. It has to be said that Abel is an artist who isn’t afraid to tear his heart apart on stage and give a piece to his fans.

Abel introduced his next track as a complete contrast to the previous poignant song, as this one was about lies and deceit – but essentially a joke. Every artist needs a slightly witty and clever song, so consider Abel’s ‘Vegan’ his answer to Bruno Mars’ hit song ‘The Lazy Song’. He got the crowd singing the melody for the chorus while he sang about how a non-existent girl “said she was vegan just to get with me,” while smiling with amusement.

The next track, ‘Shame’, was an unreleased song, so new that it had never even been heard by the public ear before. Naturally, being written at the same time as ‘You Come First’, it was equally as naughty, with smooth cymbals and locker-room lyrics of “I wanna pick you up and put your body on the bed” and “but I ain’t gonna do it! My god, look at you, it’s such a shame.” After the audience finally stopped cheering, he said that he had warned them, and carried on into ‘You Come First’. The unashamed artistry behind Abel’s work was transparent as he cried “let me hear those whistles” as his bandmates launched into their most recent release, another catchy and slightly raunchy number which the audience were only too happy to hear.

After the more subtle track, ‘Awakening’, Abel seemed all too keen to turn the heat up once again. ‘Only When We’re Naked’ could be the only choice for closing Abel’s set before the encore. He encouraged everyone to imagine themselves at home, naked in front of the mirror, dancing to their favourite song, to which one audience member cheekily shouted to Abel: “wish you were naked!”, perfectly demonstrating that he had succeeded in encouraging the audience to release all of their inhibitions. Dancing like no-one was watching, Abel embodied the message of the song as he sang “can we be one tonight, just you and I?” in the characteristically unambiguous Abel way.

The crowd demanded one more song and cheered in delight when the band reappeared on stage to perform ‘A Beautiful Life’, an upbeat and well-loved classic which had the audience dancing again. Finally, the night came to a close with ‘Unstable’. As the song neared its end, Abel came up to the barrier and put his arm around me to support himself as he belted out the final words of the song. The audience surged forward, all enamoured with the man who had succeeded in stealing their hearts.