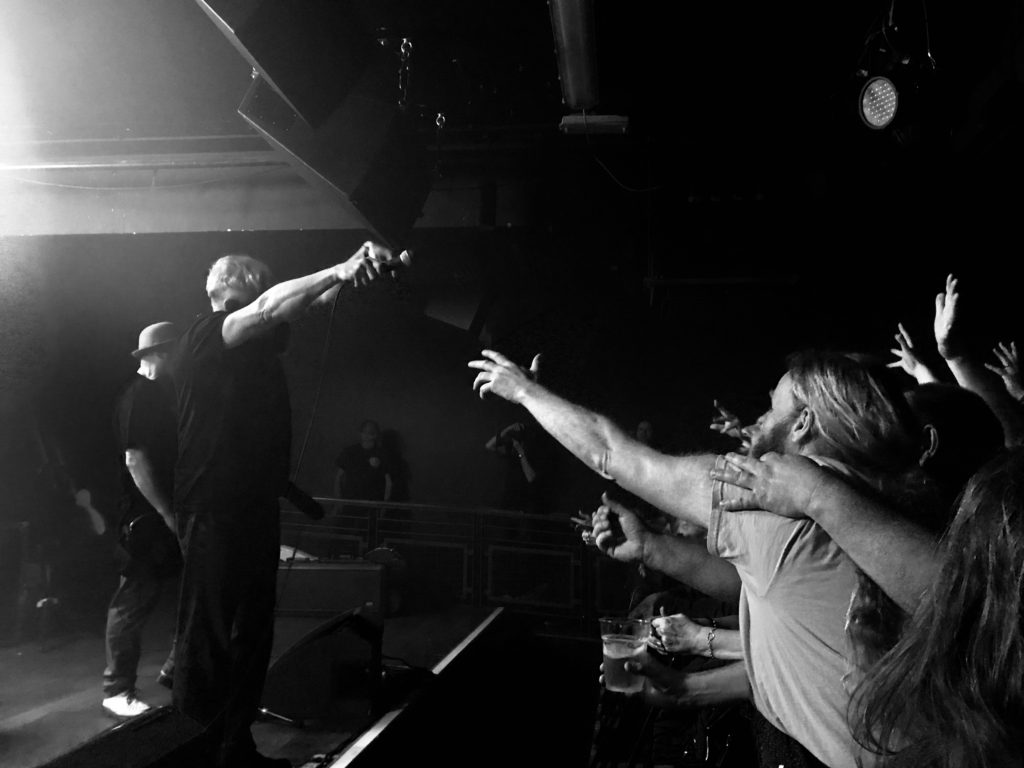 The last time Theatre of Hate played in Manchester, they were supporting Chameleons Vox on their 2018 European tour. On Friday night, however, they returned to Manchester Academy to take centre stage for the first time in our city since 2016.

Formed in 1980, post-punk band Theatre of Hate gleaned a cult following across the UK, which their reception at Club Academy proved is far from extinct. Supported by Derek Forbes and the Dark, fronted by Simple Minds’ acclaimed former bassist, a theme of musical excellence was set before the band, currently in a five-piece iteration but spearheaded, as it has been since its inception, by vocalist and guitarist Kirk Brandon, had even made their first appearance.

After a formidable performance by Derek Forbes and his band, Theatre of Hate took to the stage to eager applause, drenched in blue, and opened with “A Thing of Beauty”, an emotive number which perfectly encapsulates the depth of feeling that characterised the post-punk movement. Setting the eclectic tone which was to pervade their hour-long possession of the stage, the blue was then exchanged for red as they launched into 1982 single, “The Hop”. The track experienced a revival when it was recently celebrated by Manchester legends, The Smiths, friends of former member Billy Duffy, who joined his erstwhile bandmates on stage for a rendition of the song in his home territory at their Manchester appearance last year. It’s easy to see why Morrissey selected this song for his pre-show playlist and why Johnny Marr treated it to a live cover during their respective 2014/5 tours – with an outstanding bassline, accomplished riffs and punchy vocals, it’s an underrated masterpiece of post-punk brilliance.

Throughout the set, the band maintained a perfectly crafted balance between old favourites and new releases, such as “Maintenance Man”, the eighth track from the band’s first release in over twenty five years, Kinshi, which Brandon opened with a deadpan story about being tricked into disposing of a body by his father as a child which had the audience laughing as much as they’d applauded. The resulting effect was both a commemoration of youthful glory and a refusal to take to resting on laurels, perfectly demonstrating the band’s vivacious capacity for both celebration and boundless creativity.

One of the features that sets Theatre of Hate aside from other bands of their ilk is their unique inclusion of a saxophonist, John “Boy” Lennard, among their personnel, and perhaps one of the most touching moments of the set followed the surge of excitement as he played the opening bars of “The Hop” B-side, “Conquistador”. As the audience raised their voices in the opening cry that precedes the song’s lyrics, Kirk Brandon stood back, smiling delightedly, holding the microphone out to the adoring fans who flocked towards him, many of them seemingly transported back to youths in which Theatre of Hate had formed a backing track.

When it came to closing the set, no song could have been better suited than “Do You Believe In The Westworld?”, the band’s 1982 single, which topped the UK indie charts for two weeks. As fans young and old rushed to the barrier, it was moving to see just how much Theatre of Hate and their music meant to those in attendance. As soon as the band vacated the stage, demands of an encore filled the room, and they gladly obliged, returning for renditions of their debut releases, “Original Sin” and “Legion”. As the audience fervently sang Brandon’s lyrics back to him, it was clear that Manchester’s radical heart still beats in time with post-punk drums.