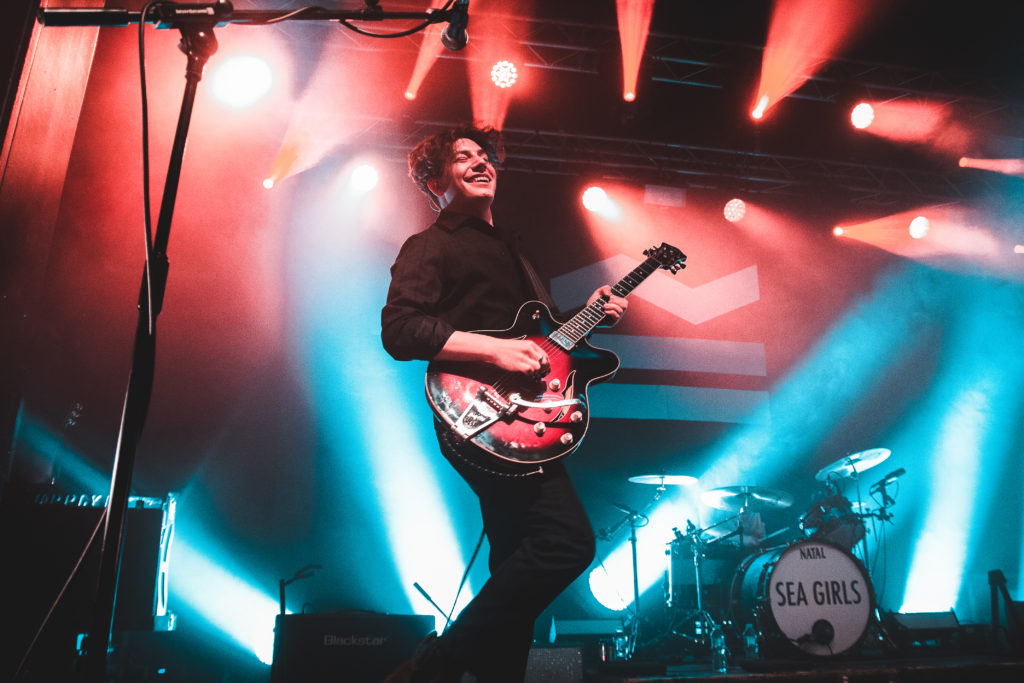 The crowd must have been thankful that the ceiling of Academy 2 was so high – their collective energy filled the room, and it was electrifying. Support band The Mysterines proved that their success will no longer be a mystery after they totally owned the stage before rising rock-indie band Sea Girls swiftly followed them.

First to the stage was The Mysterines, hailing from Liverpool, who proved that rock is having a major revival. Fellow artist YUNGBLUD may have said last year that he thinks that “Rock’n’roll is on life support”, but the genre’s development has had a major turn around this year alone. Dressed all in black, The Mysterine’s music did the talking for them. No one could have predicted the sound their modest three-piece setup could create. Lead vocalist and guitarist Lia Medcalf has the most snarling voice, fitting for their sound, and accompanied the gritty guitar perfectly. Her vocals were reminiscent of both successful vocalists Jehnny Beth from Savages and Dawn Michele from Fireflight. Bassist George Favager backed her up with fellow bandmate Chrissy Moore pounding the drums, creating the perfect trifecta. It had to be noted that their transitions were skilfully executed.

During the set, track ‘Resistance’ got the audience clapping along with the high powered and gritty vocals – it was an instant hit. Attitude-fuelled ‘Hormone’ followed in a similar vein as the drums were beating rhythmically like a heartbeat. The song contained the best instrumentals of their set and demonstrated their sheer talent as musicians.

In ‘Gasoline’, Medcalf practically spat out cutting lyrics like, “I just love to hate you” and “hate you in the morning, hate you at night”; something we can all understand. The turbulence of the music was a perfect mirror for this. As their set finished, bassist Favager walked off with a can of Budweiser in one hand and a thumbs-up in the other.

If we look at the success of other bands in this genre such as She Drew The Gun and The Blinders, it’s clear that it’s immensely thriving and it’ll be interesting to see what The Mysterines do next. They may have already made it.

The main attraction of the night, four-piece Sea Girls, were formed in London and strike the perfect balance between catchy rock and indie bangers, without being another generic product of the music machine. As soon as they entered the venue, the atmosphere immediately heightened. The members of the band, consisting of vocalist and guitarist Henry Camamile, lead guitarist Rory Young, bassist Andrew Noswain and Oli Khan on the drums, fit perfectly together, which bodes well for their live performances.

With the audience, mostly of a young demographic, already chanting “oi oi oi” and “ohhh Jeremy Corbyn” before headliners Sea Girls could even begin, it was looking to be a magnetic show. The band kicked off with hit song ‘Violet’, and the crowd proved just how dedicated they were by singing the lyrics back straight off the bat. Camamile’s voice carried across the room singing, “I’m on my knees singing Violet” as he glowed under the purple lights.

It’s worth mentioning that the band’s resume includes not only talent but integrity too. This was obvious after the first track when Camamile announced that they wanted “everyone to be safe, especially girls. If there are any dickheads they are going to be kicked out”. With this cleared up at the start, there was no doubt that this was going to be a very enjoyable show.

‘Lost’ was a particularly emotive track. Despite the crowd moshing and Young jumping off the drums with his guitar, Camamile’s soft voice on moving lyrics like “I’m a little lost, come and save me” and the last notes of the song reflected the rawness of it. It has to be said that one of the cornerstones of their music is the ability to take a relatable situation and turn it into an indie hit.

The band tried out a few new tracks amongst old favourites. Amongst the new additions were ‘Shake’, ‘Forever’ and ‘Ready For More’. Understandably, the crowd didn’t mind becoming guinea pigs for the night and obliged to help the band out in ‘Forever’, the standout unreleased song of the night. On several occasions, Camamile descended the stage to join the crowd at the barrier as they used their phones to turn the venue into a night sky. As the riffs amped up and the blue lights exploded at the chorus, it was an intense and beautifully performed track.

Classic track ‘Damage Done’ could easily be recognised as a fan favourite by the audience, yet it was to become even more memorable by Camamile venturing, this time, to the other side of the barrier. The connection this band has with their fans is indescribable – they even clocked those in the crowd wearing Sea Girls hats. Final track before the encore ‘Call Me Out’ saw Camamile standing on the drum kit belting out, “why don’t you tell me”, with Young jumping to the beat. Camamile said “shall we finish it?” as he stood on the barrier again – his apparent second home by that point. The audience lapped it all up. It’s rare nowadays to see such a talented yet engaging band.

Sea Girls proved they weren’t afraid to take on the greats by covering ‘Friday I’m In Love’ by The Cure. All members on stage seemed happy to see the crowd feeding off their energy, and riding on each other’s shoulders for the song. ‘Adored’ finished the set off well as Camamile belted out “how can she know” alongside the backing vocals of the crowd.

Sea Girls may have ended by saying, “Manchester has been amazing and this has meant a lot”, but this is just the beginning and we should be prepared for a lot more from them. They’ve got a future ahead as big as Young’s infamous high kicks. Sea Girls have a solid rating at their shows – visit a venue nearby to see for yourself.