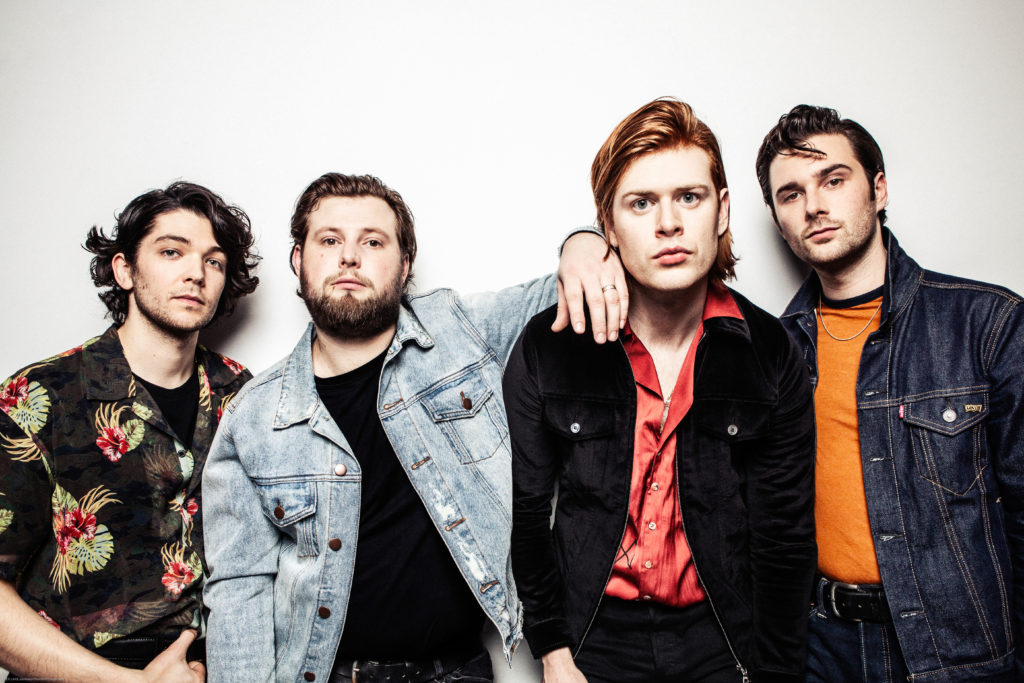 Whether it was the raw energy radiating from each band or the spirit from the audience culminating together at Manchester Academy 1, this gig was an experience which drew you in from the beginning. From opening act The Mysterines setting the ball rolling with their attitude fuelled and raucous set, to Demob Happy‘s attempt at a gritty answer to modern rock, all bases were covered. Newcomers The Mysterines, in particular, set the bar high for headlining act The Amazons. However, as expected, the final band easily managed to surpass all expectations with a star-studded performance.

A rising band from Merseyside, The Mysterines have been leaving their mark around the UK, most recently with fellow indie band Sea Girls. Audiences all around have been lapping up their heavy-hitting anthems, which were established from the beginning of their set with leading track ‘Hormone’. The biggest mystery surrounding this trio is how they can create such an intense sound while only having a basic set up. The answer most likely lies with lead vocalist Lia Metcalf’s powerful vocals, which easily sets the band apart from other generic rock groups.

From the first taste of their set through hit track ‘Hormone’, The Mysterines showed how they balance the fine line between pure noise and roaring rock well. It’d be foolish to simply pin them down as a ‘female-fronted rock band’, as amongst the three of them they have so much more to offer. Each song washed a new wave of angst and emotion over the crowd. The beating drums and powerful guitar riffs throughout ensured a neat transition every time. Ending with their heaviest tracks ‘Take Control’ and ‘Gasoline’, it was a much-appreciated double whammy.

The biggest mystery surrounding this trio is how they can create such an intense sound while only having a basic set up.

Despite the usual overdone theme shown in the lyrics of ‘Gasoline’, “I just love to hate you” and “I’m too young to be caught up in this mess”, this band are putting their spin on things, and were certainly memorable for the right reasons. By the time The Mysterines were finished, the crowd was nicely warmed up for the next band Demob Happy to take to the stage.

Demob Happy are an indie- rock trio formerly from The Toon, but have now adopted Brighton as their new home. They are a band who seem to have taken a blueprint of some of the most successful rock bands such as Royal Blood and Nirvana, and pilfered them for their own, both in terms of music and looks. However, the atmosphere they create on stage is unmatched by many other bands – gathering enough energy to instigate a mosh pit from their first track ‘Fake Satan’ is no easy feat.

Song ‘Less Is More’ saw the members bathed in red as they played the catchy psychedelic number, but it was hard not to draw comparisons instrumentally with tracks such as Royal Blood’s ‘Careless’. The similarity between songs could also be heard with the final track ‘Be Your Man’, as the introduction wasn’t too dissimilar to ‘Little Monster’. Despite this, they made a strong start by announcing it was their “responsibility to get everyone moving and have a dance, it’s Friday!” Lead guitarist Adam Godfrey unleashed the largest mosh pit of the night.

The atmosphere they create on stage is unmatched by many other bands.

Collectively, they gave it their all. The only real slice of emotion came from them singing “I want to feel something real.” Drummer Thomas Armstrong’s demonic facial expressions will be perhaps more memorable than the band’s instrumentals in a world where it’s becoming increasingly difficult to stand out and be original.

Headliners The Amazons had nothing to prove yet everything to give. After their incredibly successful self-titled debut album, expectations were high for their sophomore album Future Dust, released earlier this year. These were easily met as it became a UK top 10 album in the charts and drove them to embark on this tour as a follow-up.

The album artwork was an outline of Three Cliffs Bay, which translated as an interesting feature on stage. The clever lighting engaged all of the senses. From the explosive first tracks off their second album ‘Fuzzy Sun’ and ‘Mother’, it was obvious The Amazons are showmen who have honed their skills. ‘Mother’ in particular saw lead vocalist Matt Thomson emit a howl-like sound throughout the show, which only added to their rock n roll appeal. Thomson went on to certify Manchester as the “home of rock n roll” before they launched into ‘Stay With Me’.

A particularly moving moment of the night was the band’s rendition of their only song leading with a piano, ‘Palace’. A single spotlight was cast over Thomson, further illuminated by the mountain backdrop. He asked for the crowd to “make it just iPhone lights”, which added to the power of the track as the audience was transported to the centre of the universe.

From the explosive first tracks off their second album ‘Fuzzy Sun’ and ‘Mother’, it was obvious The Amazons are showmen who have honed their skills.

The Amazon’s ability to take on everything and succeed is a trait which can’t be knocked. Throughout the show, they included three covers into their original songs. Such as mixing their track ‘Doubt It’ with ‘In My Time of Dying’ by Blind Willie Johnson. They also mixed their fan favourite track ‘Little Something’ expertly with ‘Helter Skelter’ by The Beatles. They easily made them their own. ‘Doubt It’, in particular, was a chance for Thomson to make a toast to the audience with his can of Fosters, before entering the audience on the barrier. A true moment to remember.

Before the band could return to the stage, the audience belted out ‘Junk Food Forever’ to show their appreciation for the band. The Amazons’ encore was a chance for them to cover Oasis’ classic, ‘Morning Glory’, and a homage to their own classic tracks ‘Junk Food Forever’ and ‘Black Magic’.

Thomson even recalled getting heckled in their early days when playing with Jimmy Eat World for using a Fender Telecaster, a supposedly “not rock n roll” guitar. However, throughout their set, they proved every naysayer wrong. Their final track of the night ‘Black Magic’ saw every member of the crowd jumping with their arms in the air, Thomson’s tongue out, a drum solo, and a call for everyone to scream. It was an intense track showcasing a strong melody, and the last chance to get involved in the indie rock show of the year.

Overall, it was a show filled with energy and unexpected delight. The Amazons, in particular, kept things fresh and with the consistent imperatives to ‘scream’, provided the thrill of the funfair to the show. The surprise guests including a local Manchester lad on backing guitar helped to pad out their sound. It’s going to be exciting to see what this band accomplishes next.