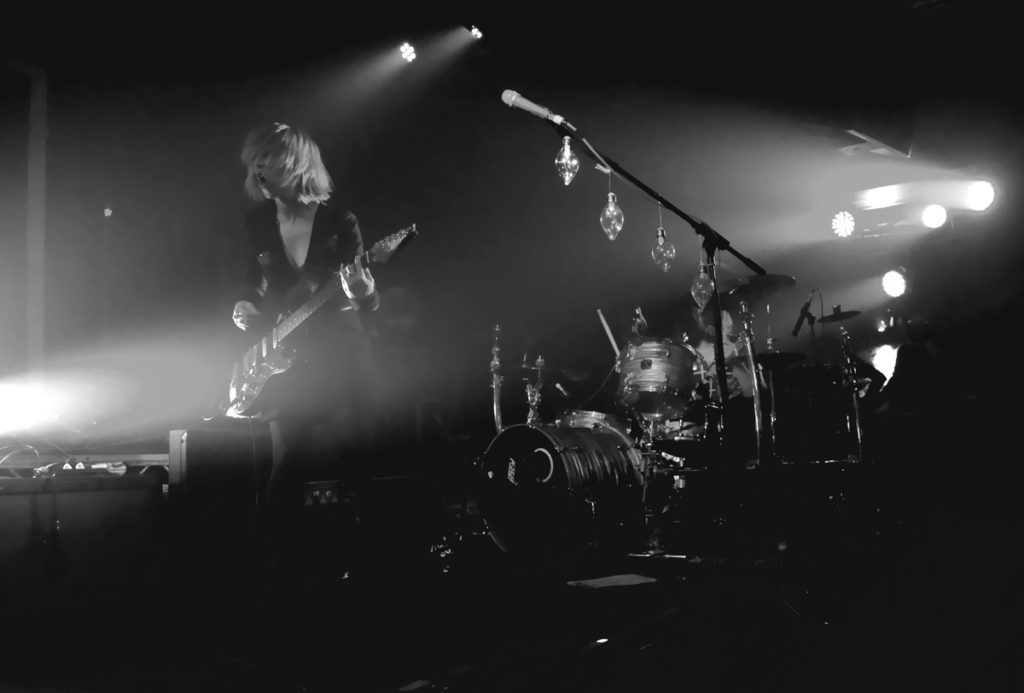 The Joy Formidable’s mini-tour, which stopped at The Bread Shed in Manchester, celebrated the 10-year anniversary release of the band’s first EP, A Balloon Called Moaning.

To commemorate the occasion, The Joy Formidable have released a special limited edition double vinyl / double CD with brand new Welsh language acoustic versions of all the tracks, titled Y Falwn Drom, which according to a Welsh language translator means ‘The Heavy Balloon’.

At the start of the gig, lead singer Rhiannon Bryan mentioned that Welsh is her second language, although it’s Rhydian Dafydd’s (bass, vocals) mother tongue. This may explain why Welsh songs were not included from the start of their career; although it’s likely that bands from Wales feel pressure to comply with the industry and sing in English.

The EP is more of a mini-album, with eight tracks in total and half of the tracks making it onto the band’s first album on a record label, The Big Roar.

It was interesting to hear Rhiannon recall how the band started out in Manchester – recalling fond memories of Withington. Rhiannon is a ball of kinetic energy; swearing like a sailor in such a lyrical way the audience hang on her every word.

The audience was made up of true fans – most have clearly been with them over the long haul. The younger attendees had the air of 90s alternative rock connoisseurs about them; which is where The Joy Formidable’s sound originates from – taking cues from bands like Belly and My Bloody Valentine.

They played the EP from start to finish in order, starting with the classic song that in many ways defines TJF, ‘The Greatest Light is the Greatest Shade’, which is the perfect meeting of Shoegaze and alt-rock. Maybe if TJF had produced five or six songs that good, the whole world would know who they were; especially as Rhiannon is one of rock’s great guitar players and frontwomen – effortlessly creating the most swirling hypnotic wall of sound with her dynamic thrashing. It was frenzy and control in total balance. The only downside is that she has to tour with a pedalboard the size of a small car.

After 10 years and four albums, you won’t see many other performers express such an obvious love for what they do. The whole band are on point and rarely miss a beat; although Rhydian’s backing vocals don’t add much – often making things too chorus led and poppy.

Despite that, every good band has a good rhythm section, and Rhydian and Matt Thomas (drums) blend really well. Songs like ‘Cradle’ and ‘Whirring’ are crowd favourites and are the basis for a small mosh pit. ‘The Last Drop’ was a real highlight of the night and makes you feel that true greatness is always lurking just below the surface with TJF.