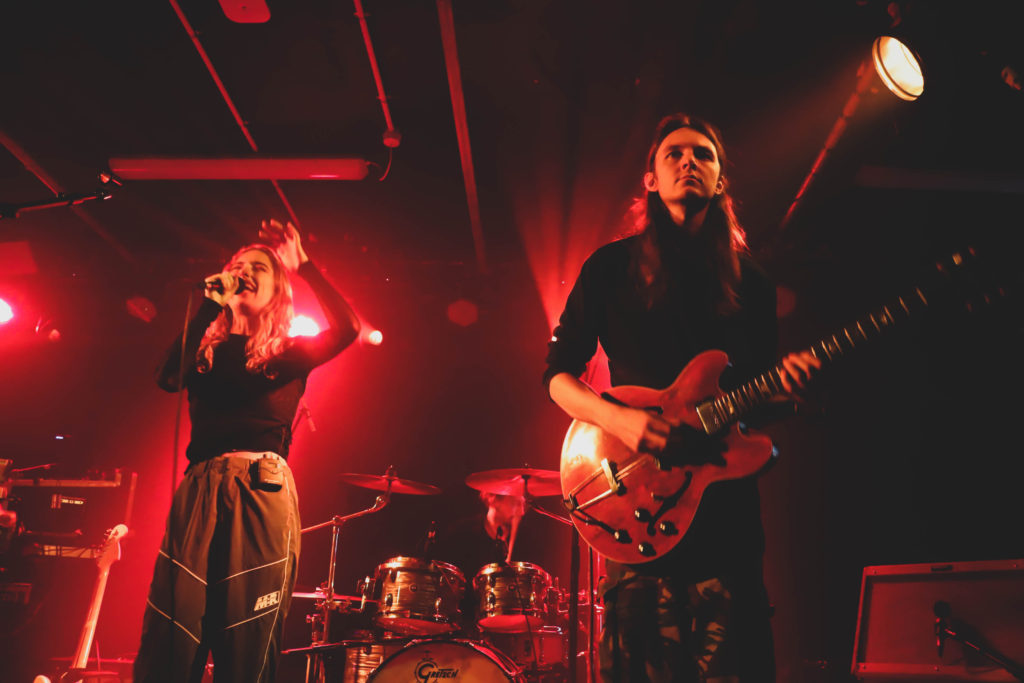 The stage was consecrated by the oceanic frequencies, cosmic vocals and high trills of victory. Brixton-based artist Jessica Winter opened the night at Manchester’s Academy 3 as a one-woman show with passionate synchronised movements and extra-terrestrial swells of sound.

Winter put her soul into the sound waves, conducting her music on stage through a laptop. Her vocals, infused with originality, transformed her into an enchantress of the night, moving under lights that changed from blue to red, unleashing emotion into the crowd.

Winter’s trench coat swayed alongside her whilst her free-flowing hair provided an empowering feminine sight. Her performance, which included songs ‘Is This Love,’ ‘Let’s Keep This Shallow,’ and her new album single ‘Sleep Forever’, was equally tranquillising – an incomparable vision and sound one can only describe as ethereal.

The singer’s original style is reminiscent of the deep mysteries of the echoing ocean. She was confident on the night – one unexpected ritual involved Winter ripping off her shirt and baring her bra and stomach for the crowd – a musical alter for the spirits in her song to dance along to onstage. Winter concluded the ceremonial intro with a piano solo, leaving a spirit of tranquil energy behind for the principal act of the night’s ritual.

Headliners Pumarosa prolonged the free-spirited atmosphere by addressing the venue in soft-spoken voices. Lead singer Isabel Munoz-Newsome, with her relaxed persona and mellow tone, spared no time getting into the band’s performance.

It almost seemed planned that the night would manifest itself as a ritual with its invocations, chest pumping emotions and enchanting sounds. Pumarosa brought a climactic mood to the alter as the band played its diverse array of beats and sequences with a saxophone, bass and drums.

The band performed their new album Devastation, including songs like ‘Virtue,’ ‘I See You’ and ‘Devastation’ with a spiritual, uplifting feeling. They exhibited a distinct genre which The Guardian has previously coined as “industrial spiritual”. Pumarosa’s diverse and unorthodox compositions really make their identity as a London band credible and they certainly stand out from many other upcoming bands.

With light flowing tones that slowly morphed into deep blues and rock, ‘Into the Woods’ which also appears in the new album, featured as the climax of the performance. ‘Virtue’ had a sense of discovery and elegant comfort within its synth tones whilst Newsome’s vocals echo, like a mix of the neon game culture of the 80s and the darker elements of Icelandic singer Bjork’s sound.

Heavenly spotlight and greenish-yellow hues depicted a forest setting, lit by fire and passion. The band eased Newsome in as she began the song ‘Princess’ whilst dancing and swaying, before dropping onto her back. All of a sudden, she stood up and asked for more smoke to herald the beginning of the end to one very ceremonial night. As she took possession of the tambourine, smashing each jingle to her hand, it was as if she were being possessed herself. The twirls of her hair brought the audience into her trance with the help of the remnants from Winter’s consecration of this now sacred space.

A backstage interview with drummer Nick Owen gave more of an insight to the band’s formation and musical proactive – concluding as a simple experimenting bad like another yet more unique than any other.

“When we’re [about to play] live, we’ll have a sort of ritual. We’ll stand in a circle and try and do a bit of breathing and get everybody on the same page,” he said. Owen added that it shows when you’re in your own head – it stands out from having a connection with the other people in the band: “We try to consciously connect.”

This ‘connection’ was clearly evident on stage. The band, regardless of their uncanny ritualistic themes and diverse forms of moods, fit right into the heart of Manchester. Owen said: “We do kind of different things. Culturally and aesthetically, it’s all kind of in the melting pot.” It was easy to feel at home during the gig. Pumarosa, a diverse and talented band, reflected Manchester, something Owen confidentially agreed with.

“You could say that it’s like the diversity of Manchester,” he said.