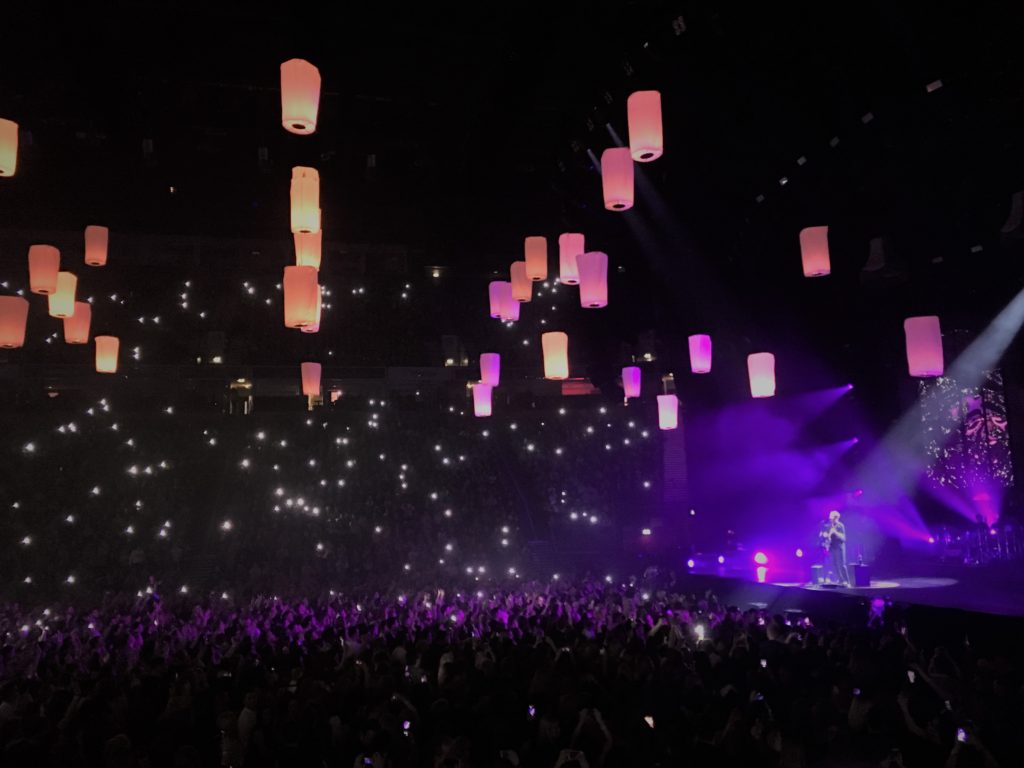 At over 21,000 capacity, Manchester Arena is a certain type of beast that not all artists have the ability to master. George Ezra, however, took it in his stride, to the extent that he created an atmosphere which felt like he was performing to each individual, paradoxically turning the gig into an intimate yet universal experience. The stage decor situated the performance in the realm of the exotic everyday, with large glass windows, a bike and various lampshades bringing his ‘Staying At Tamara’s’ Tour to life. Ezra has said that his most recent collection of songs are about “escapism, dreaming, anxieties, and love”, born out of his stay at a Barcelona Airbnb, and Ezra more than succeeded in capturing this atmosphere.

Sigrid is a Scandinavian force to be reckoned with, and her live presence needs to be seen to be believed. The crowd roared as the lights went down and a rumble echoed from the speakers, accompanied by flashing red lights. Cheering and whistling followed as an electronic melody rang out, and the band took to the stage. The lights and sound built up to a climax, and Sigrid launched into her new, upbeat release, ‘Suckerpunch’. She had the crowd in the palm of her hand as she situated herself at the centre of the stage, holding the extended note in the titular phrase brilliantly. Her voice carried well throughout the set, and could easily be heard at the back.

‘Mine Right Now’ may have been slower, but the darkened stage brought attention to the dark but relateable nature of the song as Sigrid’s vocals rang out. Ballad ‘Level Up’ also featured beautiful, soaring vocals, and the emotion that radiated through the room when she sang “nothing you say is going to push me away” was lovely to belond. This continued into ‘High Five’, as Sigrid demonstrated live her knack for exploring a pressing contemporary issue within a pop-fuelled track. As she moved with ease about the stage and giggled charmingly between each track, it was clear she was enjoying the show as much as the audience singing along with her.

‘Business Dinners’ is an attitude-fuelled track, and Sigrid explained how it was created out of a writing session with two male producers who irritated her by refusing to listen to her. However, as Sigrid, who is known for her flair for spreading positivity, said, at least she got a good song out of it. The audience seemed to agree, clapping above their heads and eagerly joining in with the chorus.

‘Don’t Kill My Vibe’ gave rise to intense drum rolls, the crowd clapping along as Sigrid stormed into the chorus, proclaiming that “it’s always fun to play that one!” ‘Don’t Feel Like Crying’ and ‘Orange Lights’ continued the dance party that Sigrid had sparked, and she lit up the stage with her boudnless energy. After ‘Never Mine’, ‘Strangers’ was the perfect closing track, with white lights illuminating the room and, with it, the connection between Sigrid and the crowd – she had clearly made her mark on them.

George Ezra is an artist with a penchant for storytelling. Whether it was through his lyrics or the story behind the process of writing them, which he shared with the audience throughout the set, it was clearly evident that Ezra prides himself on conveying emotion through his music.

The anticipation for his entrance built up as the digital clocks displayed on the screens on either side of the stage read ‘6:59’. His band appeared, the crowd applauding as ‘It’s Greg James on the Breakfast Show’ boomed over the loudspeaker, and announced that it was “George Ezra Saturday” as they launched into ‘Don’t Matter Now’ – a feel-good recent Ezra classic, it was an excellent choice of opener. Ezra peppered his set with songs from both his debut and newest albums, which gave a well-rounded set, overflowing with highlights, which managed to include all the fan favourites.

During ‘Barcelona’, soft lighting accompanied the gentle strumming, which picked up the song progressed. The haze of dreamy pink lights with a background image of leaves evoked a tropical vibe, feeding into Ezra’s admitted preoccupation with escapism. The instrumentals throughout intertwined beautifully with his voice, and the brass elements particularly shone.

‘Pretty Shining People’ gave an insight into Ezra’s habitual people-watching in a park in Barcelona, during which he took down notes underneath a mountain. He increased his crowd interaction within this number, as he asked “now, Manchester, will you help me sing “Don’t we all need love? The answer is easy”?” while encouraging the audience to lift their arms to the sky, leaving them to clap erratically as the band finished the track on a high.

After the catchy vibes of ‘Listen To The Man’, ‘Saviour’ and ‘Did You Hear the Rain’ felt particularly powerful, bringing the tempo down without forsaking the atmosphere. ‘Saviour’ saw the windows digitally portray pink and blue mountains, as Ezra transported the crowd to their own getaway fancies. As he crooned “all I got to give,” his strumming echoed the emotional song, offset well by cymbals. As the drumming built up, the guitar work abruptly ended, and Ezra sang “it’s not enough” with his eyes closed and arm up to the audience, perfectly conveying the stirring nature of his songwriting.

‘Did You Hear the Rain?’ was majestic from the outset, with Ezra belting out the opening line while the windowpane background shone blue and all the other lights went down. Their senses heightened, everyone seemed to be entirely focused on his voice as he serenaded the crowd. As the lights flashed back on, the guitars and drums signalled that the show was going up a notch as Ezra sang the chorus. The bass shook your bones, the flashing lights adding to the exceptional atmosphere. Ezra then charged into the popular track ‘Paradise’, which saw the audience turning on their phone torches, turning the venue into the night sky. As the crowd sang and clapped along with the track, it was clear the show was going incredibly well.

‘Hold My Girl’ is a soft and beautiful encapsulation of a close relationship, which translated well to live performance, as audience members throughout the hall put their arms around their significant other. Despite its comical music video, the song itself is much more delicate, and this was captured perfectly as Ezra sang “give me a minute to hold my girl” while orange lanterns drifted down from above. The crowd cheered enthusiastically – it was truly breathtaking. Another emotionally driven track, ‘Leaving It Up To You’, saw the continuation of the release of orange and purple lanterns, and with fairly simple lighting, the audience were compelled to focus on Ezra’s voice, as he held the mic while closing his eyes, wrapped up in his music.

For ‘Sugarcoat’, a song inspired by South Africa, the stage was bathed in red light. The saxophone is a highlight of the song, as it sounded exceptional live, while Ezra sang out to the audience with his hands in the air that he doesn’t “even want to go out tonight”, and they danced and applauded in response. Ezra then called for Manchester to “make some noise for this incredible band! What a pleasure! Everybody join us for a dance while we play ‘Blame It On Me’,” which sparked a large cheer, the song being a true tried and tested favourite. The band really shone in this number, taking to the centre of the stage. The audience matched their enthusiasm, possibly creating, between them, the most electric atmosphere of the show.

‘Budapest’ was a fitting final track, given that Ezra apparently never made it to Budapest due to sickness and still hadn’t quite made it to the end of the night, as there was still an encore to go. Despite the fact that cheap wine was apparently the cause of his illness, a last resort to coping with watching the Eurovision in Sweden, it was resulted in his best-known track, which seemed to have every single member of the crowd singing along as Ezra let them take the lead before he and his band disappeared backstage.

The band then returned to the stage to perform encore tracks definitely deserving of a special mention. ‘Cassy O’, a catchy, upbeat number, was introduced by a beating drum which begged the audience to dance along. Ezra’s vocals carried well and the fast-paced, flashing lights fit the song well, as he shouted: “Make some noise Manchester!”.‘Shotgun’ was the final track of the set, and was subsequently the last chance for the audience to impress Ezra with their vocals as he taunted that Liverpool had been the best crowd so far as the audience threw their arms into the air while dancing ecstatically, surrounded by lilac lanterns and Ezra’s velvet vocals.

It had truly been a night to remember, with an electric atmosphere. It is probably worth noting that is worth booking a ticket to a George Ezra gig if only due to it being cheaper than a holiday, as one wonderful aspect of Ezra’s honest writing is it creates a portal into his adventures through which we can live vicariously. The only question to ponder isn’t whether he’ll master the tricky ‘third album syndrome’, but where will he take us with him next. We can only be sure that we will look forward to it.