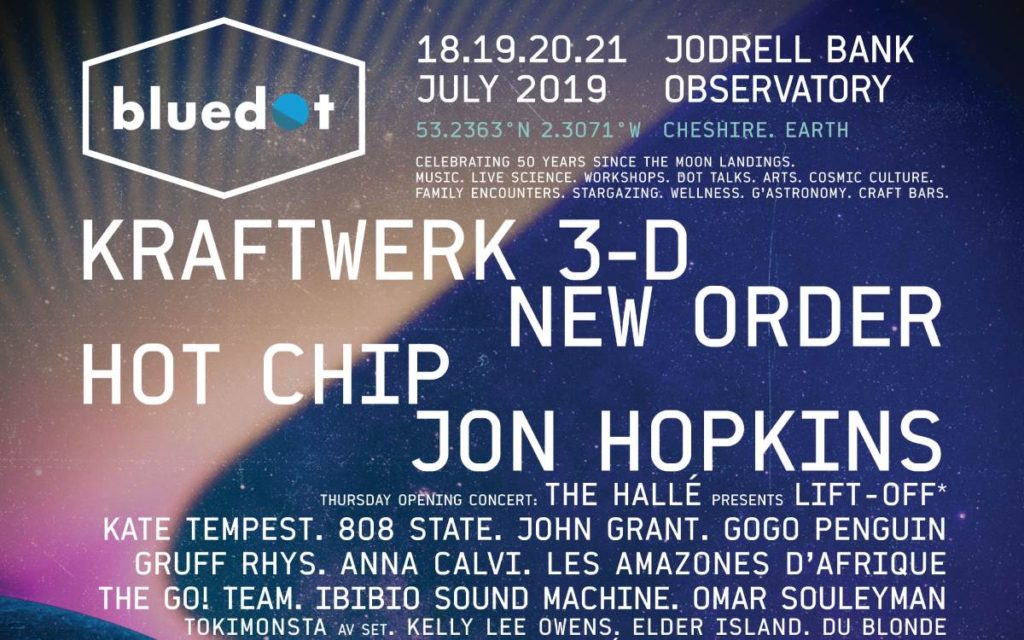 Every summer, hundreds of thousands of Brits attend music festival’s across the country, each one showcasing their own unique sites, line ups and parties. No festival, however, is quite as unique as the Blue Dot Festival.

Aptly named after Carl Sagan’s famous book Pale Blue Dot, Blue Dot Festival has so much more to offer than your standard campsite and arena festival. With an interstellar line up accompanied by awe-inspiring talks underneath the mesmerising mega-structure that is the Lovell Telescope at Jodrell Bank, we take a look at the top six acts we’ll be on the look out for across 18-21 July weekend.

After rising from the ashes of Joy Division and best known for their 1983 hit single Blue Monday – which sold three million 12-inch copies worldwide and solidified them as one of the most iconic bands of the 80s – New Order top the bill for this year’s Blue Dot (along with Kraftwerk 3-D, Hot Chip and Jon Hopkins), and subsequently top our list of acts performing at Jodrell Bank!

The German electro pioneers found world-wide success with their innovative 3D gigs, making revolutionary use of robotics and technological experimentation – and their one-of-a-kind show will be a must see at Blue Dot 2019.

One of the first to popularise the genre, Kraftwerk was founded in Dusseldorf in 1970 by Ralf Hütter and Florian Schneider. They went on to set up Kling Klang Studio in the same city where they produced all of Kraftwerk’s albums, and by the mid-70s found international recognition for the soundscapes they created.

ATTENTION, PEOPLE OF EARTH! Henge have landed, and they bring with them the gift of Cosmic Dross. Robed in other-worldly costumes and accompanied by dancing robots and mushrooms, Henge bring a truly unique sound and performance along with a very special message from outer space.

Crossing the boundaries between psychedelia and electronic dance music, Henge may not come at the top of festival line ups, but should certainly be up there on your list of acts to see – and where better to see a band from outer space than at Blue Dot?

Described as “a clash of African and electronic elements” inspired by “the golden era of West-African funk and disco and modern post-punk and electro,” Ibibio Sound Machine produce a truly cross cultural sound.

Fronted by London-born Nigerian singer Eno Williams, that band released their self-titled album in 2014 on Soundway Records, followed by Unyai in 2017 on Merge Records. They make our list of acts to catch this summer for their truly global sound, featuring Ghanaian guitarist Alfred Bannerman and Brazilian percussionist Anslemo Netto.

Manchester-based jazz trio GoGo Penguin have come on leaps and bounds since their 2014 album v2.0 was recognised as a Mercury Prize album of the year alongside the likes of Damon Albarn and Jungle.

The trio have been widely described as acoustic-electronica, but equally draw on rock, jazz, minimalism and, most interestingly, computer game sounds and glitches. They’ve been playing regular shows and festivals across the country and have since released two more albums – Man Made Object, 2016 and A Humdrum Star, 2018.

Their unique take on jazz would be a welcome accompaniment on a trip in to outer space, but until commercial space travel becomes more available, we’ll have to settle for their performance at this year’s Blue Dot.

If you’re a fan of Tarantino movies (of course you are, who isn’t?) then Tarantino Disco is just the thing for you at this year’s Blue Dot.

Blending genres and transcending cinematic and dance floor boundaries, Tarantino Disco were inspired by the soundtrack of Tarantino’s movies. Expect to be taking part in Rabbit Slim’s Twist Content, compete at the disco competition, or find yourself at Detroit’s 8 Mile.

Check out the mix they recently put together, inspired by the trailer for Once Upon A Time in Hollywood.

You can view the full lineup as well as purchase the remaining tickets here.