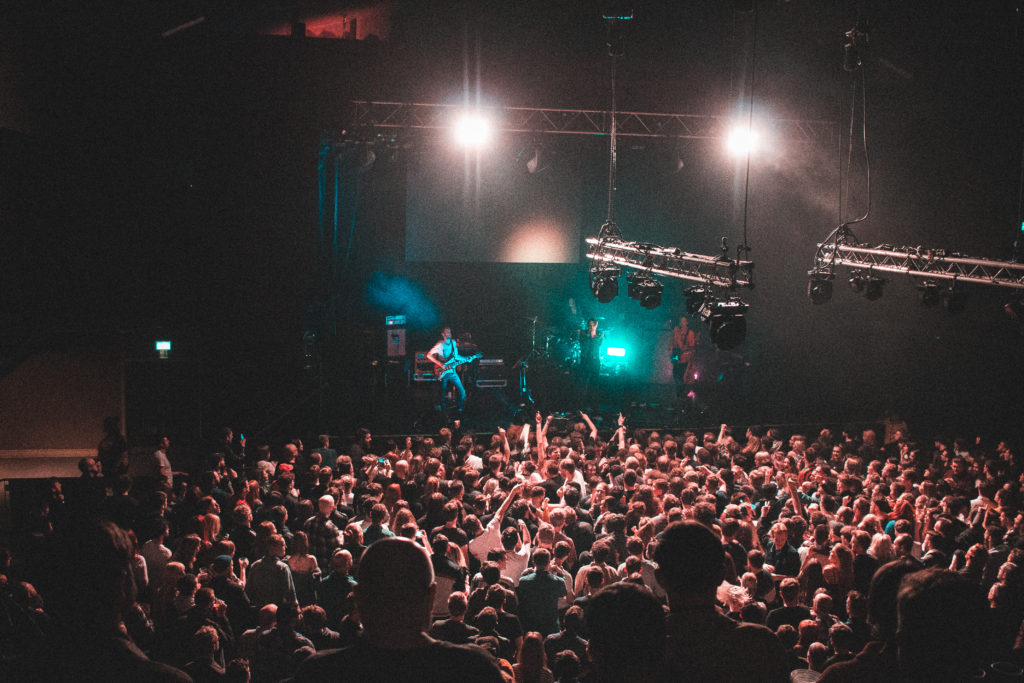 Plastic pint pots fly through the air as Drenge deliver their dark frenetic best. Any struggles they report having had with the creation of third album Strange Creatures, are slim in evidence. The now-foursome pack a powerful punch. The punk fire still burns to a grunge haze. Harnessed fury funneled through a tight neck of clever lyrics and spat through a wry smile.

Earlier in the day, the brothers posted on social media that Manchester should ‘hurry up and finish your tea’ as the doors were opening at the ungodly hour of half past six. As the third night of the album tour, the Loveless brothers were clearly happy to be back on the road.

At seven o’clock the early birds are trickling in to the Ritz and an expectant murmur grows as a pleasant haze fills the venue, adding to the lazy nineties drone from the speakers. The fresh faces of Valeras appear on stage and the bassist takes centre stage, wowing with crystal clear vocals. She exudes confidence, beckoning the crowd to “come a bit closer”, asking whether we like to boogie. “I like to boogie, I hope you’ll join me.” The attentive faces of the audience are bathed in pink as she dips the neck of her bass into the crowd, sending hypnotic waves through the speakers. When it’s time to say goodbye, we’re told to “Come see us, we’ve got some free shit”.

The lights go down. Cheers and whistles pierce the darkness. Excitement levels rise sharply, lights glow up blue and we’re hit with the first deep distorts of bass and thundering drums. Straight into the title track, Eoin sings “all my strange creatures” as if addressing us. The controlled power of this tight unit is undeniable and it pounds into Autonomy.While their music pounds with integrity, their humour shines through not least in frontman Eoin’s chat, “Thankyou, how you doing, it’s Friday! Payday! Brexit day!” Rob Graham powers the bass throughout, going irresistibly deep on “We can do what we want”.

Their clear talent and dedicated musicianship are a still a tight vehicle for disaffected, politically-tinged rage. Vivid, witty and visceral, the fan favourites have a vigorous chunk of crowd bouncing hard. Some fans might need convincing of the band’s steer towards a new sound. If the crowd respond with any less enthusiasm for the new tracks, this only reflects the band’s confidence in their live performance of them. This is bound to strengthen as the tour drives to a head at festivals later this year.

Drenge have grown up a bit.  They’ve got a few more morning-afters to sing from. A few fans may still be in the heady thrust of midnight but they’ll catch up. That’s not to say the band were lacking in energy, far from it. The frontman’s soda-shaking stage-bounding kinetics erupt into a volcanic rush of drums and guitar distortion with a satisfying frequency. Album reviews were not wrong, this is a ferocity fit for the stadium.

We move through Let’s Pretend and the ever-pounding rhythm is overlaid with a haunting psych drone. We speed to a strobing climax of animal noises, sirens, and Eoin’s on his knees. They walk off stage, triumphant, but the cheers for one more song are unremitting and the Loveless brothers acquiesce. It’s just the two of them as the others have “gone for a wee”. Somehow Eoin makes this add to the charm. Rory pipes up, “We could do one together, couldn’t we mate”, so they do, and Eoin dedicates the gig to Keith Flynt.

A few notes of Fuckabout sees Rory head to the crowd. There’s an emotional peak as hands send him overhead. One guy gets lifted up by his friends and high fives Rory. At the end of the track, the rest of the band haven’t re-emerged so Eoin raise his hands, “I guess I gotta go”, and with a cute wave, he’s off.

We disperse as we hit Oxford Road and a lone fan echoes Eoin with a croaked out “words get stuck in your throat”. Yes it was a “mixed bag” but liquorice allsorts are more fun than pure aniseed.