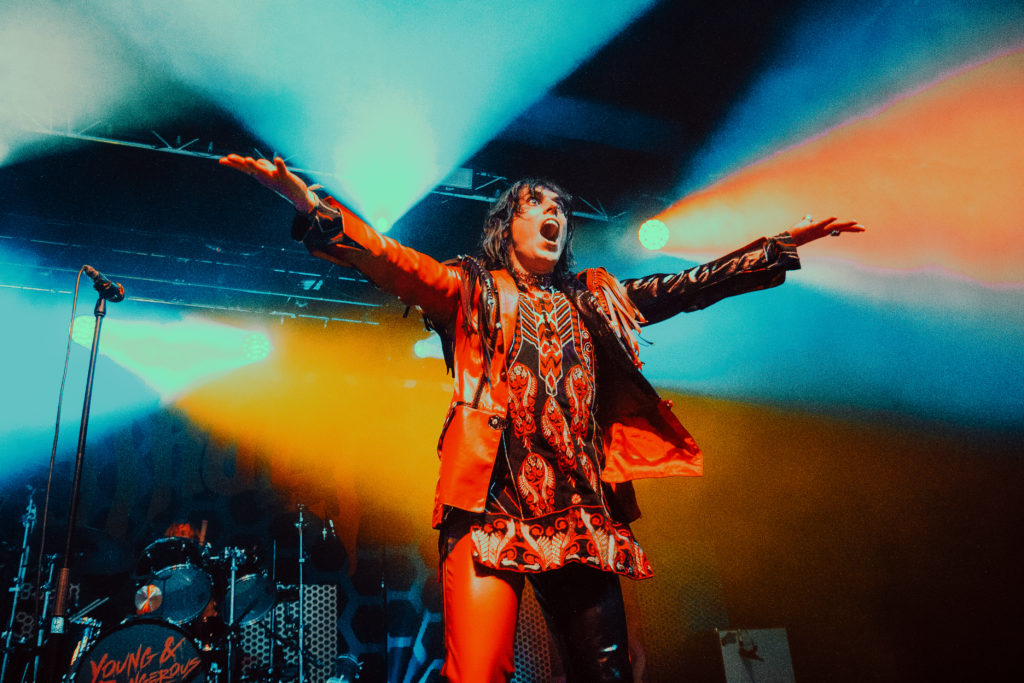 A showcase of talent and an insight into modern rock, both relative newcomers King Nun and rock veterans The Struts showed that a real show depends not on the size of its venue, but the passion of its leaders. Academy 1 may only hold a few thousand people, but particularly enigmatic front-man of The Struts, Luke Spiller, gave a dual experience which was personal yet universal – the mark of a true performer. These may have been the biggest shows played by both bands to date, yet neither show any signs of slowing down.

Label mates with the UK’s most current bands Pale Waves and The 1975, King Nun are in good company. As soon as the lights dimmed and they stepped on stage it was clear that they’re more than just spring lambs among a pack of senior wolves, living in the increasingly cut-throat music industry.

They kicked off their set with upbeat number ‘Transformer’, a particular favourite from their recent debut album ‘Mass’. Their energy was instantly present, and the drums drove the raucous track. Vocalist Theo Polyzoides uses his unique voice well as he cries ‘Transform’ to give it a harder rock edge, without crossing the line of being ear-splittingly painful – a true virtue especially when viewed live of course. They proved they could do both sides of the spectrum, by knocking out ‘Heavenly She Comes’, which they described as a “romantic slow barn dance”. The repeated use of “yeah” throughout the song did give it a definite Nirvana vibe – ‘Lithium’ anyone? Despite their obvious dedication to the ‘Grunge Greats’, they have enough gumption to stand on their own – from immediately asking how everyone is and declaring Manchester as one of their “faves”, their dedication to their audience was clear.

Their legacy was left with one of their tried and tested numbers ‘Hung Around’ which saw Polyzoides using the stage well and the instrumentals perfectly in sync. They may have expressed their shock when seeing the size of the audience as the lights came up, however, they are set for bigger and better things. Not only should fans of VANT and The Pale White give them a try, but anyone who wants a piece of the fastest-growing name in the indie/alternative realm – you won’t be disappointed.

The Struts are no strangers to filling the shoes of famed bands of the past such as Queen, with even the lead singer Luke Spiller being repeatedly cited as our generation’s answer to Freddie Mercury, a claim which most die-hard Mercury fans would of course heavily dispute. However,  The Struts ambition lies far ahead of being a knock-off Queen band, despite how flattering the comparison may be. From Spiller’s echoing voice asking if the crowd is “ready to rock and roll?” it’s clear that he is the dictator for the night where the only option is having a ball.

Opening track ‘Primadonna Like Me’ immediately demonstrates how The Struts are becoming ever more polished in their performance and deserving of the space of a larger stage to thrive. Spiller’s energy is something which most toddlers would fail to embody, as he implores the audience to join in and get their “f****** hands in the air!”. His tendency to change costumes throughout the show, use imperatives and declare “Ladies and Gentlemen”, may seem a tad on the pantomimic side, however, he is reverting to performances gone by. It is a real show as he asks the audience “Are you ready to witness the greatest show on Earth?”. Perhaps enough to give Hugh Jackman, Zendaya and Zac Efron a run for their money.

The energy is upheld by his bandmates too, especially in its ‘Body Talks’ and ‘Kiss This’, which the audience feeds off easily. Lead guitarist Adam Slack took the reins to entertain the audience during Spiller’s outfit change consisting of a large red costume with draping sleeves. Slack executed some of the greatest riffs heard within the show. The Struts repeatedly prove how easily they can put their stamp on their show,even managing to put their spin on ‘Dancing In the Streets’- a lovely Martha Reeves & The Vandellas cover. It was a  more upbeat version and Spiller’s voice proved to be the defining feature, the crowd couldn’t help but singalong. A real mid-show treat. There isn’t a weak link amongst them, and this was carried through until the final dramatic track of their encore ‘Could Have Been Me.’ Throughout the show, it was clear that there’s no stopping them now.

It has to be said that both acts are evidently worthy of acclaim in their own right. With such a diverse crop of talent in the ever-changing music scene, it is becoming increasingly difficult to stand out. However, with hard work and effort, these bands are proving that there is so much more to come than simply copying what has been done before. Be sure to catch them if you can.