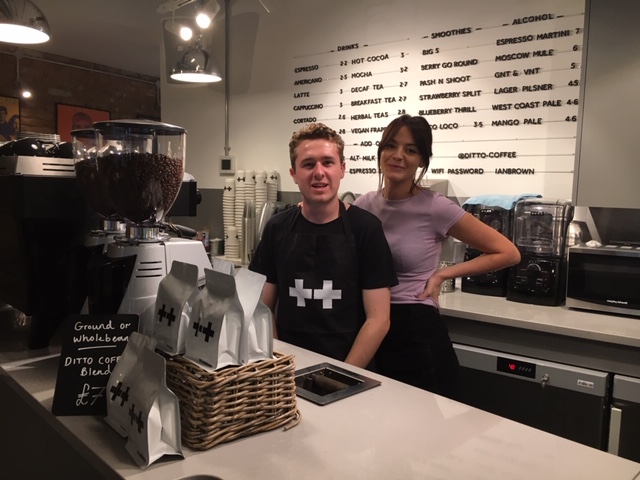 Neighbouring a group of offices, you might not notice this little coffee shop with its minimalist décor. But once inside, you’ll thank yourself that you decided to sate your curiosity. With a whole range of food for meat-eaters, veggies and vegans, alongside a wide assortment of alternative milk, this hidden gem caters for all.

Ditto coffee was founded by two brothers, who (in their own words), couldn’t find a place to drink good coffee anywhere, so decided they would create one themselves. These brothers are Lee and Matt Parsons, the owners and CEOs of record label Ditto Music, which, for those unaware, has worked with artists such as Stormzy, The Smiths, Ed Sheeran, and Aitch.

“They wanted to create a coffee shop that people wanted to come back to. They wanted an atmosphere that was welcoming and a place where aspiring musicians can be heard.” – Natasha Murphy, Ditto Music Head of Operations.

But the Parson brothers didn’t want their coffee shops to just be coffee shops. They also want these spaces to be a platform for local and up and coming artists to be discovered, something that’s encouraged by the presence of a music ‘dropbox’ situated near the counter inside, where artists can place USBs, demos, CDs, and even vinyls containing their own work. This way, their music can be heard by the CEOs themselves. Artists have received gigs, been added to playlists and even signed so far as a result.

Ditto Coffee will host live music nights too, with the very first coming on 26th October, which will feature the American-based band Airways. They’ll also have students from the Royal Northern College of Music (RNCM) performing on Halloween if a party isn’t quite your cup of tea (or coffee).

As it says on the shop window, Ditto Coffee is hoping to help the local creative community with its presence. So, whether it’s a place to hear new music, a chill atmosphere to study, or just caffeine to help you power through the day, Ditto Coffee might just have what you’re looking for.