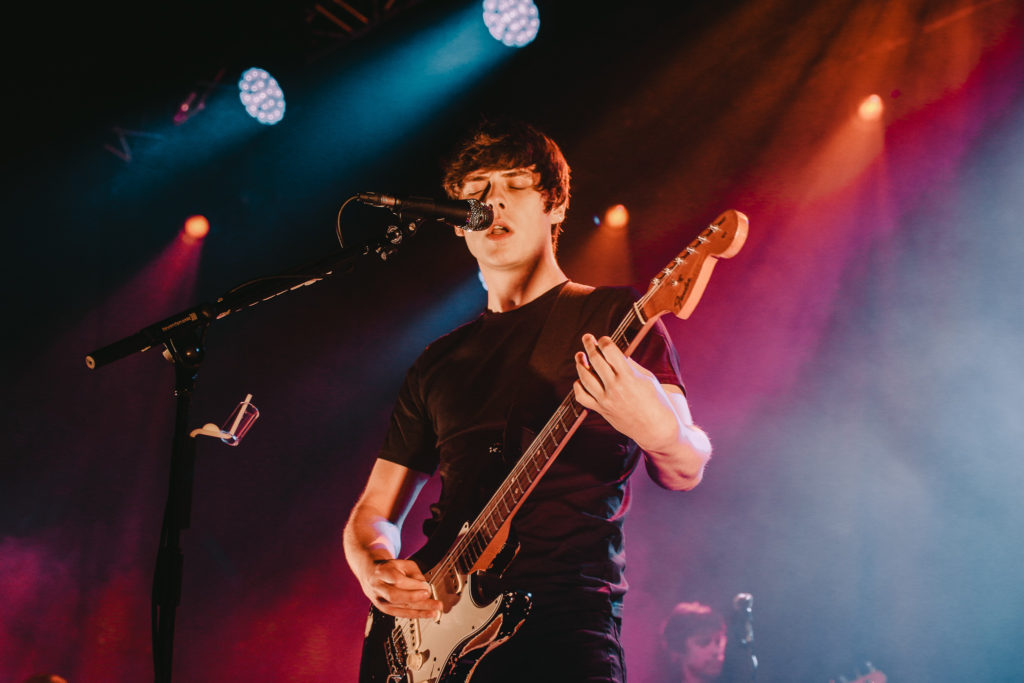 Only touring off the back of a new single, it was clear Jake Bugg was just itching to hit the road again. Hauling his back catalogue of snarling, indie folk-rock across the UK on a five-date winter tour, the 26-year-old singer-songwriter stopped at Manchester’s Academy 1 to play, a little unenthusiastically, through a much-loved discography.

Supporting Bugg was ONR, an energetic indie electronica artist from Scotland who shares his name, intentionally or not, with the Office for Nuclear Regulation (ONR). The artist, a muscular, fist-pumping man clad in black, bounded back and forth across the stage as he tried to weasel out some enthusiasm from the audience.

Songs ‘Stop falling in love’ and ‘5 Years Time’ took on an ethereal trance-like monotony, as ONR repeated the same title lines over through a microphone laced with reverb. Stilted, fuzzy solos and a pumping rhythm section accompanied soft verses that led into big, operatic choruses. The synth worked well – ONR’s chord progressions and melodies were perhaps a little predictable – but they were hooky. He has a Killers and Coldplay meet Interpol sound, injected with a bit more fire, but a little less imagination.

There were plenty of sing-along songs, although the crowd wasn’t really singing that much. It seems ONR needs to plug his music somewhere relevant, and unfortunately, supporting an artist like Jake Bugg is probably the wrong way to go about it.

Then, the headliner. Jake Bugg is often compared to Bob Dylan, which, judging by his records is a pretty fair assessment. He shares much of the same jangly folk tones and cutting, tinny vocals that define Dylan’s finest work. However, when Bugg plays live it’s a different kettle of fish – his fans often form well-mannered mosh pits. Classics like ‘Lightning Bolt’, ‘Two Fingers’ (which encouraged exactly the sort of gesture you’d imagine) and ‘Seen it all’ had the venue in a frenzy.

Bugg’s guitar tones were phenomenal. His Fender Strat cut right through the mix with fuzzy, distorted tones that echoed across the hall. He even included some surprisingly complex guitar solos. Much the same can be said about his voice; it was pitch-perfect all night, and its resonance is something to behold. Every word was crystal clear in the mix, sailing high above a solid backline.

Bugg’s selection of tracks for the set couldn’t really be faulted – he opened with a couple of new songs like ‘Rabbit Hole’ and ‘Kiss Like the Sun’ (his latest single) and closed with plenty of fan-favourites. However, his setlist had an odd pace. After the crowd were riled up from ‘Lightning Bolt’, Bugg played ‘Saffron’ and ‘Broken’, both slow, emotional acoustic tracks, and following ‘Slumville Sunrise’, an angry, driving song, he slowed the tempo right down for ‘Scene’, a ballad. It was confusing, and a lot of potential energy went to waste.

Bugg’s stage presence didn’t help either. Perhaps a nod to his more reserved personality, or a some laid-back persona he’s trying to emit, the performer just doesn’t match the intensity of his music – nor do his band. It seemed nobody on stage was intent on making a scene.

Bugg is a wooden performer, quaint at times, but as the crowd fell pushed closer to the barrier and chanted “Jakey Jakey Bugg” between songs to the melody of ‘Baby Give it Up’, the singer merely acknowledged them with a quick smile before getting straight back to work. He almost seemed a little intimidated.

Nonetheless, the energy of the audience carried itself. And in a way, Bugg’s taciturn coolness begins to rub off on you. He played his last song, an aptly timed ‘Two Fingers’, waved goodbye to the Academy and strolled out as the house lights switched on – no encore required. Clearly, Jake Bugg isn’t one to mess about with the usual gigging niceties, and whether his loyal supporters are moshing to high-powered guitar licks or swaying softly to a gentle ballad, the man will carry on undeterred.