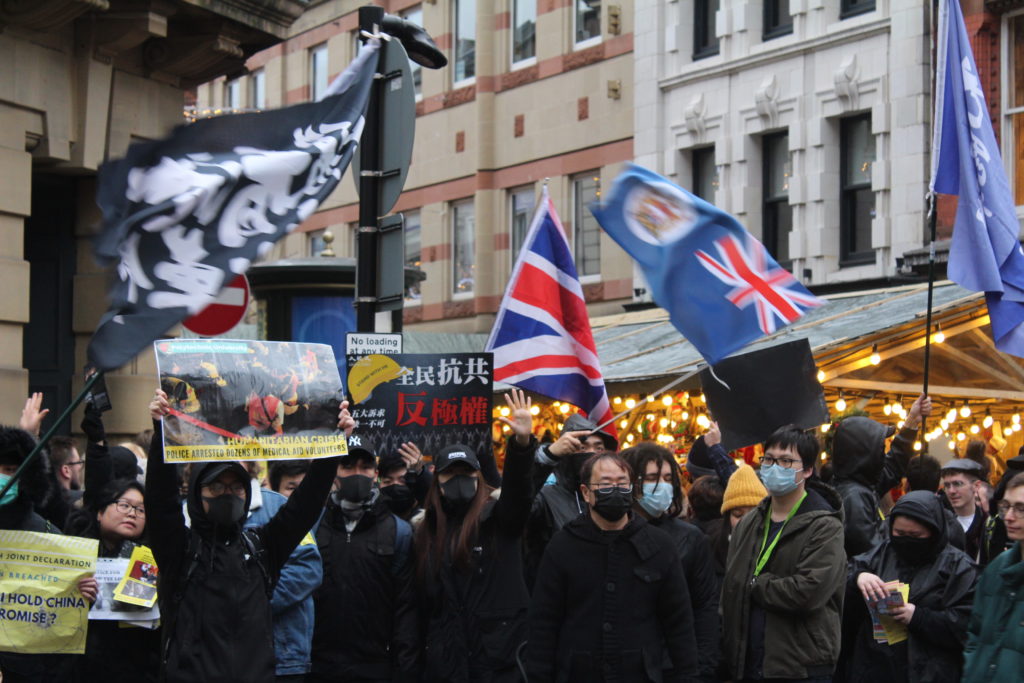 Words and photography by Ben Townsend and Ben Thompson

Adorned with flags, banners and face masks to hide their identities, the pro-democracy protesters marched through All Saints Park, Deansgate and St Peter’s Square, calling for Britain to make China ‘keep its promise’ – citing the Sino-British Joint Declaration – that Hong Kong would exist separately from China’s socialist system.

They also made “five demands”, including the withdrawal of Hong Kong’s extradition bill, an investigation into police brutality and the pardon of arrested protesters in China.

The protests come after months of unrest in Hong Kong, where confrontations between the Hong Kong police and protesters have become increasingly violent. Two people have died in recent weeks – a student who fell from a building and a 70-year-old cleaner who was thought to have been hit by a brick.

One protester at the rally told aAh! Magazine, “I definitely want to see the British government take solid action. Dominic Raab has recently spoken out about it in a firm tone, but it was only in words. Without sanctions and other measures, China won’t take the United Kingdom seriously.”

Another protester, who was carrying a Union Jack, said, “This flag stands for freedom. It stands for the old British government which made promises to Hong Kong. We’re holding this flag to symbolise that Britain should stand with us in our fight for freedom.”

The Sino-British Joint Declaration was a treaty formed between China and the United Kingdom in 1984, which allows Hong Kong to ‘enjoy a high degree of autonomy’ from China’s socialist system under a “one country, two systems” legislation. Current protests claim China is now attempting to infringe on this agreement, which is supposed to remain unchanged until 2047.

The rally in Manchester on Saturday was one of many throughout the UK in solidarity with Hong Kong. Others also took place in Birmingham, Edinburgh and London. The protesters claim their rallies have no leaders but are organised on Telegram, Whatsapp and Facebook.

Chants in the protest included, “Five demands, not one less”, “free Hong Kong, democracy now” and “fight for freedom, stand with Hong Kong.”

One protester told aAh! Magazine, “We are showing that even though we are living in the United Kingdom… we will never forget the place that gave us what we have today.

“We want to promote our messages and demands to the UK people to let them know what is happening in Hong Kong right now and hope that the British Government will do something at least to help us and to do as they signed in the Sino-British Declaration in the 1980s.”

He added that the protesters are urging the public to “vote for parties, not only because of their Brexit policies but also their foreign policies on how they treat Hong Kong,” in the upcoming general election on 12th December.

Those on the rally urged local people to support the cause by signing petitions, write to their local MPs and spread awareness.