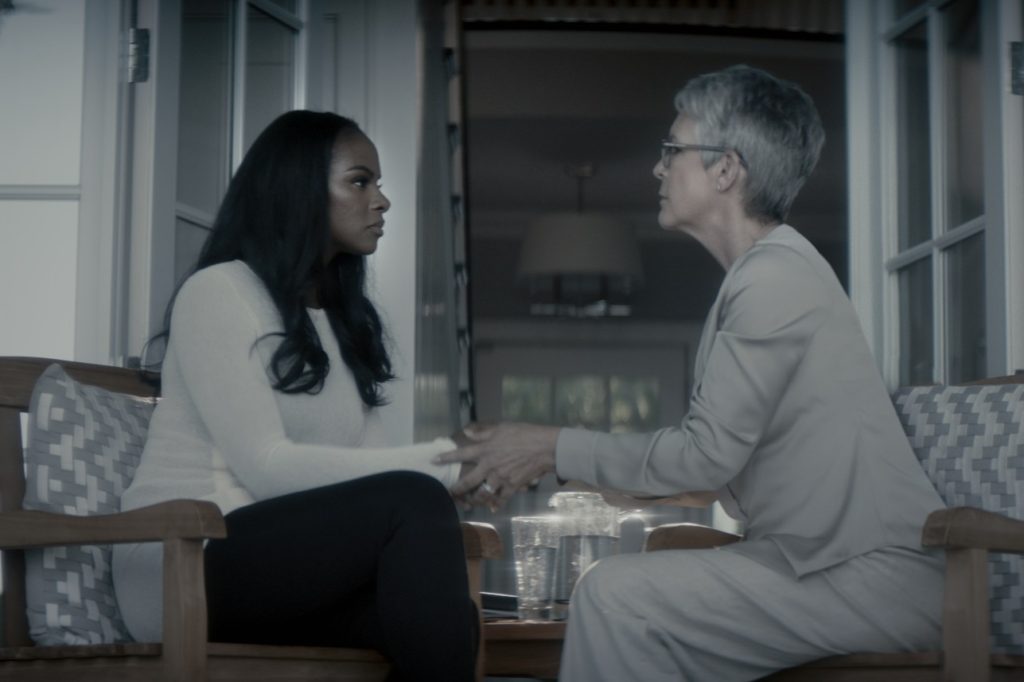 “Where is Homs, exactly?”

This is a question asked – in complete earnest – by a sitting President of the United States, in his war room. He is being briefed by his National Security Adviser about the possibility of “ending the War on Terror.” How? By killing five known terrorists, and thousands more innocent people, in a tactical nuclear strike.

At this moment, I slam the space bar on my keyboard, which brings the sorry saga to a halt, and exclaim, “SERIOUSLY?”

An Acceptable Loss is a bad screenwriting masterstroke. In ninety very, very long minutes, it conspires to cram in as many political thriller clichés as possible. Sexy savant in government role? Check. Hacker account that contains Cy somewhere in the title? Check. A glock under the pillow? Check. Macguffin technology driving the plot? Machiavellian menace somewhere at the top? Check and check again.

The story is that Libby, played by Tika Sumpter, is a former National Security Adviser to Jamie Lee Curtis’ Vice President, who is haunted by said decision to knock off five terrorists with a small nuke, and is now struggling against people who don’t want her spilling the beans about it. To give you an idea as to the stupidity of the script, may I remind all readers that it has been NATO doctrine for decades that calling a nuke of any size tactical is like calling blunt force castration subtle. Also, the launching of any nuclear weapon, at anyone, would trigger those of other countries to fire. And this has been the state of play in international relations for seventy-four years.

“I know, we can win the War on Terror by wiping out everyone in the entire world!”

“Gee, that’s some great advice, there!”

Libby’s astonishing lack of survival acumen continues to demonstrate itself through her decision to reside in a massive suburban house, in a major city, where a sizeable chunk of the population would like to see her dead. Seeing that everywhere she walks into she is recognised, from restaurants to universities, you would have thought she would have taken her efforts to get off grid a little more seriously than just getting rid of her phone and having no e-mail. She seems to be the type of person who would put on a DPM fishing hat and then think they’re invisible.

Four years after her decision to commit mass murder somehow doesn’t end the world, she takes up a position teaching “Understanding Modern Warfare” at a university, where she is met by protests from the student body. Here, she is vulnerable to writer/director Joe Chappelle’s penchant for hackneyed, expositional storytelling. No internal monologue, characters explaining how they know one another, radio and TV reports giving endless info-dumps – the list goes on. We further learn Libby has attracted the attention of voyeuristic student spook Martin, who manages to break into Libby’s house, wire it up for surveillance and inspect her underwear drawer for good measure. A good sniff would be all it took to complete his stalker bingo-card up to that point. Through one contrivance after another, they come to realise they can only trust each other. Perhaps this is just me, but if I found the only person I could trust was the one who broke into chez moi and had a good root around my smalls, I’d opt for solipsism.

The fact that Chappelle situates a lot of this grandstanding, orotund rubbish inside a university is another red flag. The campus is to the hack writer what Latin terminology is to alternative medicine. A false buttress to total horseshit, which only ends up amplifying it (God’s Not Dead being the gold, or, rather, brown standard of this abhorrent practice).

It’s a shame to report that Clarke Peters forms part of the cast, just in case you thought the weirdest thing that Peters did before was appear in Midsomer Murders. He and Lee Curtis offer the only reprieve to the teeth-grinding idiocy, although when chewing the scenery (or, in Peters’ case, reclining back on it and being amazing) they find it is made of marshmallow.

If you’re after a much better exploration of the casual ruthlessness and moral greys of prosecuting a global counter-insurgency, then watch Eye in the Sky. If you value your time at all, then avoid this complete shambles.

An Acceptable Loss will be available on Digital Download from July 15 and can be bought here.