You are here: Home / Culture / Entertainment / Review / Uncategorised / “A Character Which Has Blossomed With The Times”: Review – This Time with Alan Partridge 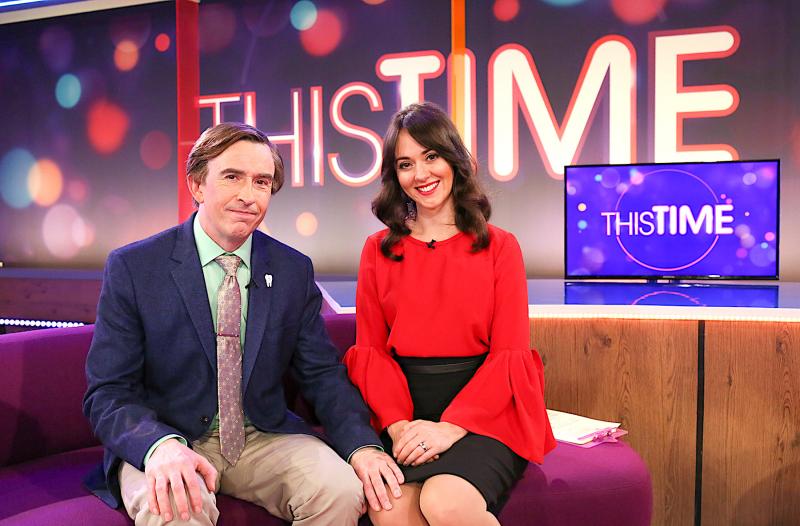 It may be possible to map an evolutionary scale of the existence of Alan Partridge on our screens and within the public consciousness. He’s come a strikingly long way since Knowing Me Knowing You,in which his character, much younger, was indulged in slickness and a delusional sense of professionalism. With Alan’s latest offering, it seems apparent that he has survived natural selection. He has adapted, morphed and is funnier than he’s ever been.

He appears increasingly more out of place in our current cultural and political climate, and although desperately clinging on to his TV career, he is just about alive and kicking in a way which creates a close your eyes and look away effect which the writers – The Gibbons brothers, alongside Coogan’s seamless performance, execute so well in this latest incarnation. Coogan, remarkably, has benefited greatly from the ever-changing, and for better or worse, difficult to keep up with social landscape of the nation, and with the strong emergence of PC culture in the past decade, Partridge’s character becomes a new monster, at least comedically. With age, he has become increasingly out of date in our contemporary culture, and it is this which underlies the root of the comedy in This Life.

No better is this orchestrated in the debut episode than when Alan precedes to present a One Show style out-of-studio segment, exploring the issue of germs and cleanliness in our everyday lives. A rather mundane topic, but this still leaves room for Alan to unintentionally offend. He compares the ways in which antibiotics work with quote: “giving a box of chocolates to an angry spouse”. He implies that, in first attempt, this may “subdue” the spouse, but by the twentieth time, the same effect will not occur. The analogy is both ridiculously random and border-line offensive and this places him as the fish out of water in this style of TV show in which flirting with misogyny might be best avoided.

But Partridge is established, his psyche known like the back of their hands to long-standing fans. Despite his ability to constantly offend, we know his intentions are always to try and be the best at what he does. In his mind, this analogy is useful to the audience, and this is where the laughter lies. Based on recent BBC comedies, I very much doubt a lot of the material would have passed under an original script idea, but because of Partridge’s familiarity and established nature, Coogan and the writers have the ability to delve into risky territory in nail-bitingly awkward yet interesting ways.

It’s hard to ignore the unfamiliar, yet familiar environment which Alan finds himself in. Sitting on a sofa, he stares into the camera, gazing with a painful mixture of confusion and anxiety, images which are broadcast to millions across the nation. The role of Piers Morgan, you may notice, will come to mind, at least in terms of its format. If politicians can’t cognitively map the logistics of Brexit, why not throw in an a middle-aged, conservatively-leaning TV presenter to make sense of it all in an increasingly youth-influenced media industry? On top of that, let’s have him explore sensitive and complex issues like the Me Too Movement. The premise is irresistible from a comedic and satirical perspective.

It’s early morning, magazine-style shows like Good Morning Britain which, in recent times, have seemingly began to blur the lines between satire and reality, as a out of touch host attempts to tackle the ever increasingly socio-cultural changes that occupy our consciousness in and ever increasingly globalised world. The crucial distinction between these real types of shows is that the real ones play on this controversy and rely on it for viewing figures.

With This Life, this is distorted, as Alan is, by pure logic, destined to offend unintentionally whilst presenting a show which is only interested in trying to be safe and middle ground whilst exploring both sensitive and mundane issues. Partridge is put there by the writers, by matter of circumstance (the fixed presenter has fallen ill – this adds to Partridge’s tragic desperation to claw his way back into the limelight) to blow these expectations and conventions into the air, and it is this dynamic which makes this new series Coogan’s funniest and daring.

You don’t want him to crash, burn and die. We find amusement in his flirtation with complete social and existential collapse – but we always want him to come out the water gasping and just about breathing. At least this is how I feel, and the direction the Gibbons brothers are taking in him. We laugh at him referring to one of the guests as ‘Alice Clunt’ instead of Alice Fluck; to which Partridge, right on beat, replies ‘I see what I’ve done there.’ But I likewise felt inclined to side with him when his co-host, Jennie, played perfectly by Susannah Fielding, keeps stealing his jokes and remarks which Alan makes off air. A part of you wants Alan to gain some credit with him being up against the big shining lights of the BBC.

Shooting a man live on TV may not be topped in terms of Partridge falling out with the BBC again, but with 5 episodes left to go (Mondays, 9:30pm), and with subjects such as Brexit, bereavement, and the Me Too Movement lined up for Alan to tackle, there may be backlash coming Alan’s way. Strangely though, I find my self backing him, and this is where credit is given to the new avenues the writers are willing to explore in this fresh and much-awaited return of the most awkward host there will ever be.