You are here: Home / Travel / A camping trip done right 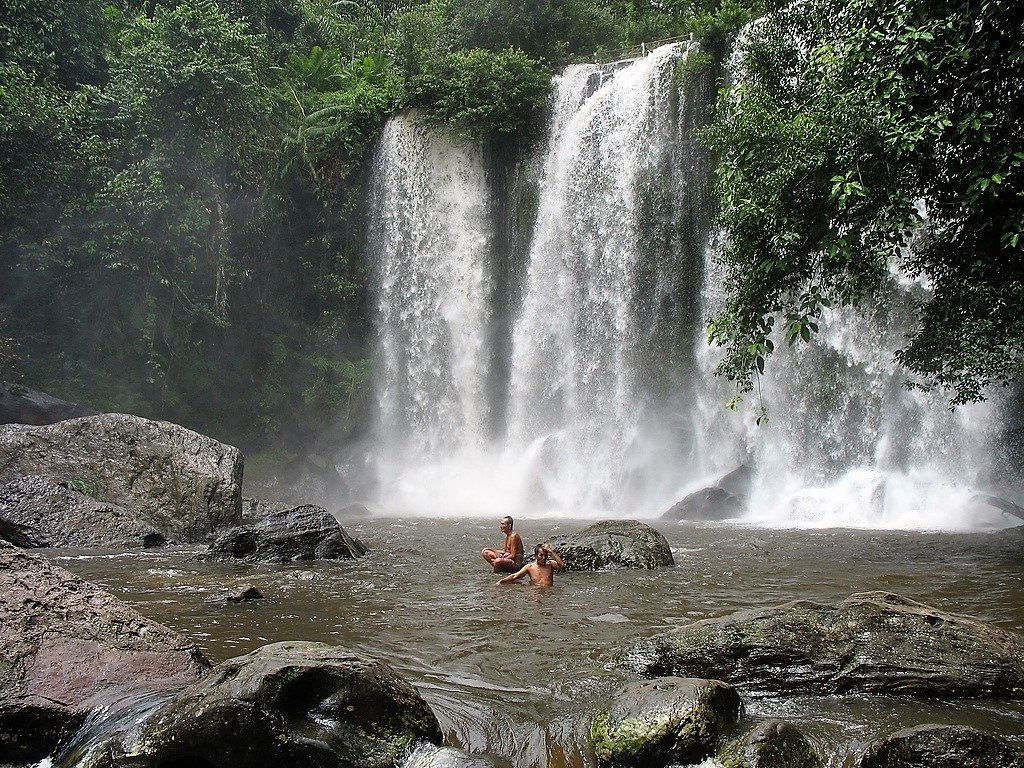 The first thing that I noticed during the two-hour long motorbike drive from Battambang was that my brakes were not working properly.

Something that I also came to realise was that the combination of a nervous passenger gripping on for life behind me, the state of the ‘roads’ in Cambodia and the maniacal pace that the lead driver (the only one who knew the route) had set for us, was not exactly what most people would deem safe.

Our destination was a campsite straddling the border of Thailand, inhabited by some Khmer locals who would be looking after us until the next day, alongside providing access to a waterfall that was within walking distance from the camp.

It was also mentioned that the area was surrounded by landmines from the Vietnam war. Nothing was going to be too easy.

With around ten of us from the cheapest hostel around, driving at an average of seventy kilometres an hour, it was a mild surprise that we completed the journey unscathed.

That was, of course, until we made our dramatic entry into the camp, where, as our future hosts stood to greet us, one of the bikes slipped on the dusty descent and caused a domino effect of skids and crashes, leaving us in a dirty mess at the feet of the clearly unimpressed onlookers. We brushed ourselves off and attempted, miserably, to play it cool.

It was hot, so we headed straight for the waterfall. Deep enough to swim, it was a much-needed refreshment after a long, sweaty start to the day. However, despite the vast ranging egos between us, including a wannabe gangster, two worryingly competitive brothers and a highly-strung English teacher, nobody would jump from the top.

One by one we all stated our own reasons:

The excuses continued. Instead, we unanimously decided to sit down by the edge of the pool, continue to drink and completely ignore the large elephant in the room.

This lasted for a while, until a large group of fully clothed local teenagers calmly approached the waterfall from behind, climbed to the top one by one, and, without hesitation, bombed into the water, before swimming back to begin the whole process again. We had hardly noticed them arrive before the whole spectacle was over.

Slowly, cautiously, we began to avert our gaze once again towards the summit, brains furiously ticking over.

Gradually, shirts came off and the brave few of us began the steep climb up, over thick tree roots that snaked up into slippery rock holds, levelling out at the top for us to fearfully tiptoe along. Despite the harrowing drop beneath us, waiting patiently for a loose grip or misplaced step, we quickly reached the spot.

The interesting thing about looking over the edge of a waterfall is that it looks ten times higher from the top. This, alongside the fact that three-quarters of our group were eagerly watching in anticipation from below, meant that my hands were increasingly beginning to feel the effects of adrenaline.

There’s only one rule for what we were about to do, and that is not to think. The more time spent pondering on the edge, the more likely it is you’ll decide against it. In order to override this (sensible) survival instinct, it takes a certain ‘fuck it’ mentality.

And so, with a loud, collective “fuck it”, we jumped.

Come evening, the food had been served up and was delicious. Despite having no idea what we had just eaten, it was the perfect antidote to our still shaking limbs. The owners of the camp reared their own livestock – pigs, cows, chickens – and all of the vegetables were grown on site. It seemed that we had had a taste of everything.

It was only later on that we noticed a few dogs roaming around too, shuddering with Cambodia’s reputation for meat in mind.

The evening was going very well, a beautiful jungle sunset, many more beers and glowing campfire by the waterfall, until it was time to go to bed. Either our hosts had only planned so far as dinner, or the leader of our group had forgotten to mention that we would need sleeping bags, blankets, pillows, or anything to keep us warm during the freezing night-time in that part of the country. So it was that we were met, instead, with a cold, hard floor inside a small hut to send us to sleep.

I assumed the foetal position for the solid two hours that I managed to rest that night.

In the morning we were faced with a fiery argument between a few members of the group, probably fuelled by a general lack of sleep, fresh on everyone’s faces, leading one of the girls to hitch a lift back with a local lorry driver instead.

We said some very awkward goodbyes to the owners of the camp, who we hadn’t really seen the whole time, and got on the bikes.

Double checking that everyone was ready, we adjusted our helmets, inserted our keys and… One last hurdle. None of the engines would start.

For around half an hour we tried to persuade them back to life, but it seemed at first that the traumatic drive the previous day had exhausted them.

It took all of our combined intelligence to figure out that they were actually overheated from leaving the bikes out in the sun the previous day and all morning, only after checking the gas, the oil, the ignition, and the kickstart. Yet, as if a blessing from God or just the productivity of our mounting frustration, the familiar gurgle of their metal bellies eventually roared back into life, just as we were about to give up all hope. After a second goodbye to the now completely disinterested residents of the camp, we finally hit the road.

Of course, on the drive back my motorbike finally broke down, we got lost a few too many times and we never saw the girl who had hitched back again (but her bag had been taken from the hostel, so she did arrive). Yet, all in all, I believe it was a camping trip done absolutely right.