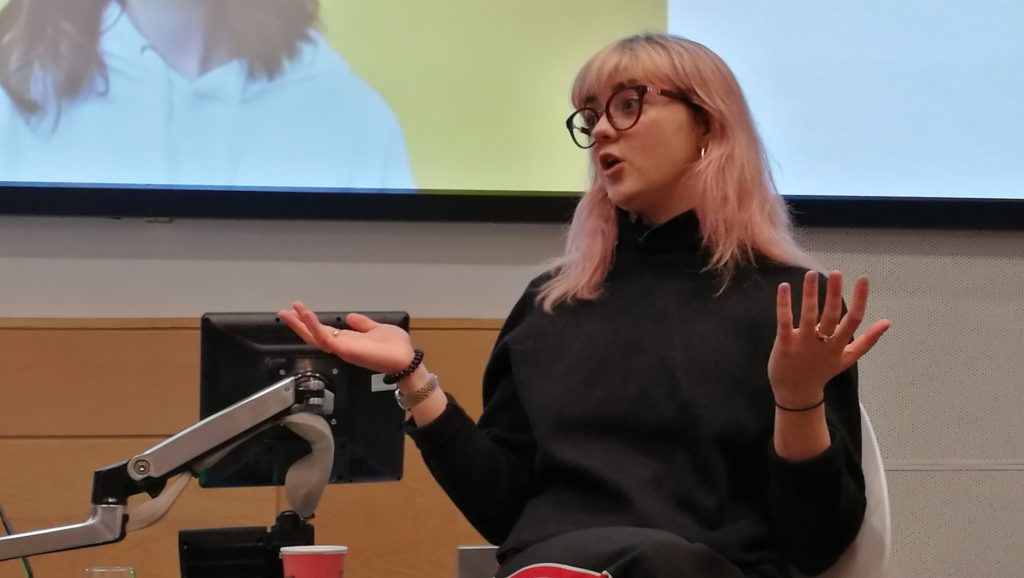 By Alex Challies and Dan Gough

Game of Thrones star Maisie Williams spoke to a sold-out crowd of students at Manchester Metropolitan University this week. The discussion ranged from Maisie’s own experiences and professional career, to her future aspirations of helping fellow creatives realise their potential.

Maisie discussed starting out in the creative industries, the graft and seemingly impossible odds one must overcome. For Maisie, her original aspirations were to be a dancer. This dream led her to Paris when she was 11, a trip funded by knocking on doors and gathering donations wherever possible. 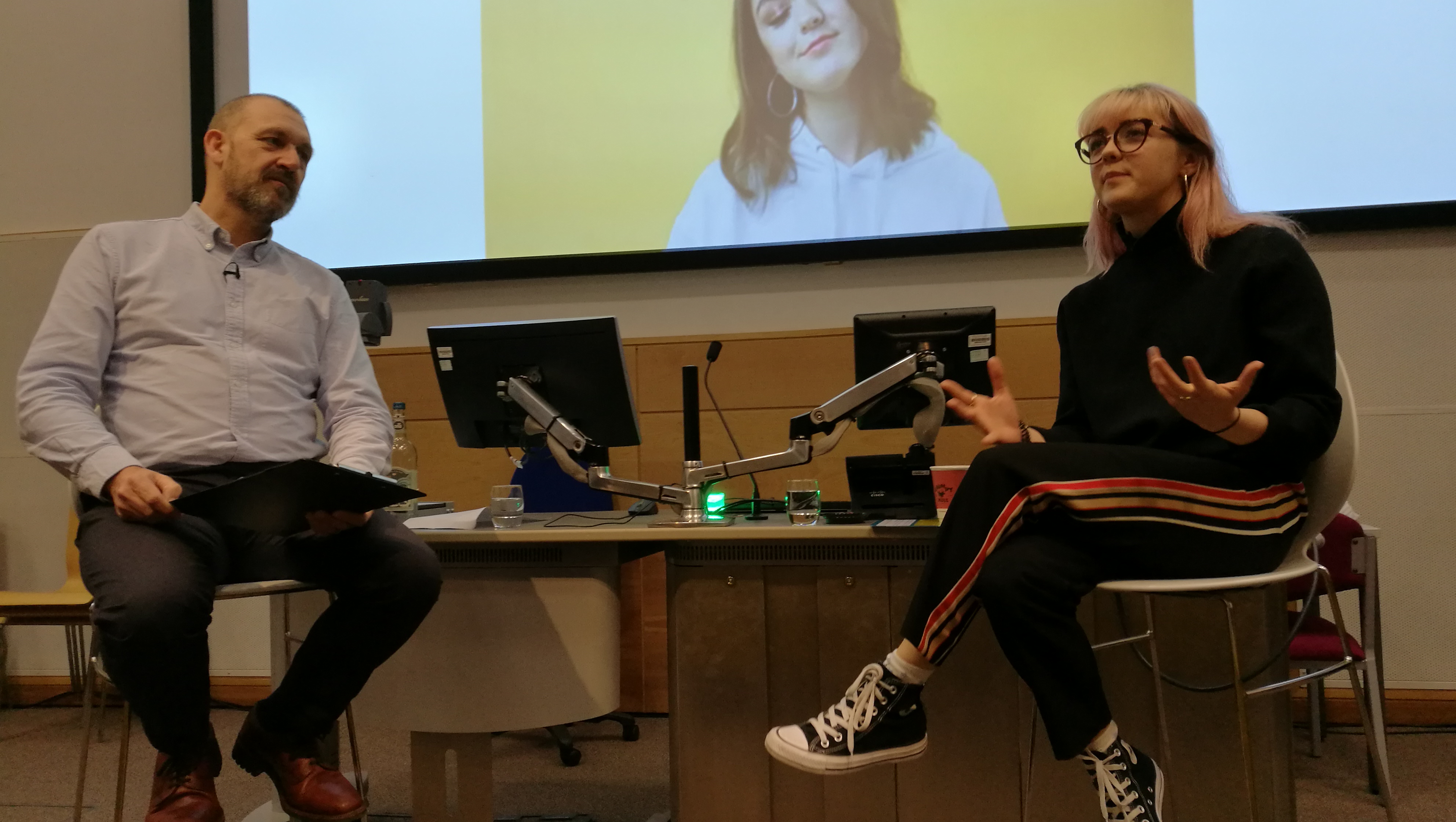 Indirectly, this audition resulted in Maisie getting noticed for her acting abilities. From this Maisie was assigned to an agency, a sequence of events she reflected on not truly understanding at the time.

Her first audition would prove unsuccessful, for a potential part in the film Nanny McPhee and the Big Bang (2010). Maisie was displeased with the outcome of this, so she joked with the student audience. It was then her second audition which became life-changing, an opportunity to be part of a new fantasy series: Game of Thrones.

“I’m sad it’s done and over,” said Maisie. With production on this HBO epic now finished and the final series due to air in April this year, Maisie is looking to the future and expanding to a different venture alongside her prominent acting career.

With this arrives ‘daisie’, an app aiming to become a central social platform for creatives of all mediums to come together, share and collaborate.

The initial concept for daisie came from a discussion between Maisie and film producer Dom Santry. The two had developed a good working relationship during production of iBoy (2017), so began working together again to realise this vision of a ‘social media for artists and creatives’.

“Everyone I spoke to about my latest endeavor thinks I’m mad,” said Maisie. “I love being in a room with people who underestimate me.”

Since launching in August 2018, numerous creatives have tried and tested the platform, providing valuable feedback to the development team. Online reviews are reasonably varied with an average score of 3 stars out of 5. Considering the relatively small team and startup nature of the daisie project, this is not a surprise for the first build of the app. 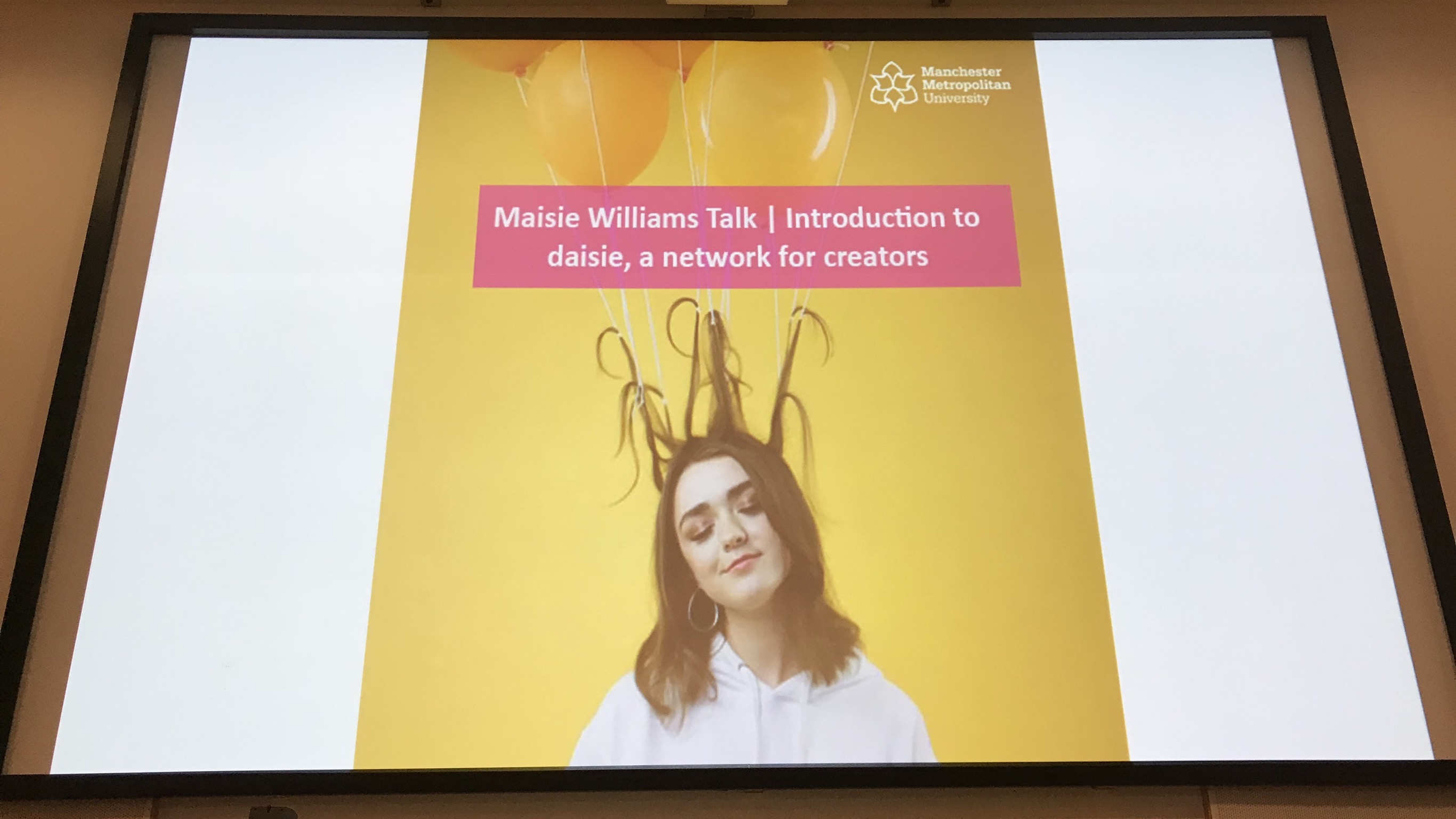 Maisie herself highlighted this aspect during her talk, stating that since launching the app on IOS the company was able to attract a larger team to develop a higher quality product more in line with the initial vision. The app today prides itself on inclusivity and diversity within the creative world, in particular giving credit where credit is due on collaborative projects.

“We wanted to try and reward accounts in a way which mimics the real world,” Maisie explained to the audience.

Consumers are accustomed to finely tuned and intuitive systems when it comes to any kind of social app, so breaking into this market is no small task. With the new daisie build launching in April this year, Maisie and her team hope the second, more polished iteration of the platform will allow users to see the true potential lying behind the ambitious concept.

Alongside pushing the daisie app, collaborators Maisie and Dom also aim to incorporate their company ‘Daisy Chain Productions’, a venture the pair set up in partnership with actor Bill Milner. Daisy Chain Productions was set up to produce short films and television drama, with an independant focus on the development of young talent.

Following the launch of daisie, there was an allowed ‘grace period’ of six months before any synergy between the app and production company would be implemented. This was to allow the daisie platform time to breathe and grow without interference.

From the expiration of this grace period, and moving towards the second build of the app, Daisy Chain Productions seeks to collaborate with creatives deemed as outstanding pillars of the online community within daisie.

Beyond the platform’s aims to connect individuals across numerous mediums, this allows an additional and realistic target for users to aim for whilst organically using the service.

An example of these pillars of the online community is the ‘daisie 100’. This list of 100 creatives came about from a competition launched on May 1st 2018, and was announced prior to the app’s original launch in August 2018. The winners were those believed to best embody what the daisie platform stands for; creatives striving for excellence within their chosen medium.

Maisie, Dom and Bill hope that this will further drive struggling creatives and particularly talented youths, whose careers trajectory currently relies too heavily on luck. As well as this, to finally make irrelevant that tiresome idiom of ‘it’s not what you know, it’s who you know.’ If the aspirations of daisie pan out as planned, it could ring an end to nepotism within the creative industries.

This idea of showcasing an idealistic view of creatives involved with the daisie platform effectively demonstrates the attitude and drive necessary for someone to break through in the creative industries. Regardless of someone’s chosen medium, be it fashion, film, acting or art, there is the need for it to be truly what they want to do.

A successful creative is defined by the fact they are constantly striving to improve on where they currently are, looking for where to go next and what the next project could be.

“A lot of it has to do with self belief,” said Maisie. On her own experiences she added: “Seeing that daisie is going to work, having that self belief is what keeps you going.”

When the daisie platform reaches maturity and better showcases its true capabilities, which may well be possible once the new build is released in April 2019. Maisie hopes that it will allow more young creatives to receive opportunities similar to what she was lucky enough to receive.

Though even with her enormous success, Maisie still has a desire to follow an unobtained dream. Similar to her motivations for initially starting out and pushing for that opportunity in Paris, Maisie aspires to one day becoming a dancer.

Maisie suggested that should she one day have an acting role which allows her the opportunity to dance on screen, that in itself would be amazing. A creative is never done creating, it is an endless hunger which needs continuous feeding. This should not be seen as an affliction however, but rather the very reason it appeals to so many.

This event was organised by Manchester Metropolitan University Careers and Employability services alongside TALENTmatch recruitment.