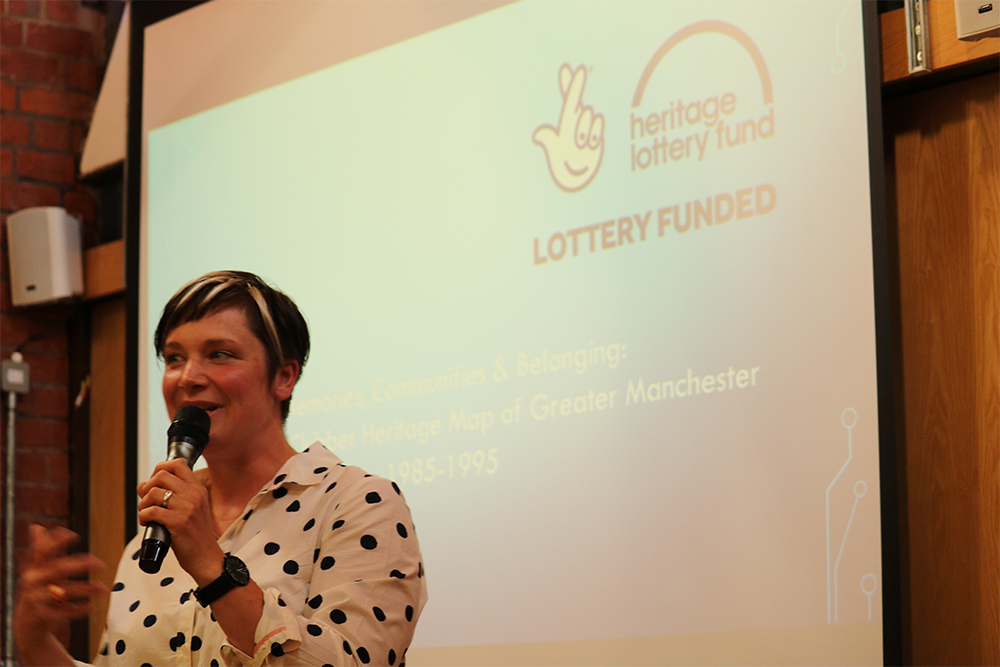 The Manchester rave scene was an internationally known cultural phenomenon through the 80s and 90s, with such famous icons and exports as The Hacienda, New Order, The Happy Mondays, Primal Scream and 808 State. Films like 24 Hour Party People and books like Dave Haslam’s Manchester, England have served as popular testaments to this city’s recent cultural history. It’s a history of do-it-yourself, anti-establishment activity – usually focused around the weekend, itself a concept established in the early days of the new industrial city.

The Lapsed Clubber Project is a Heritage Lottery Funded project based at Manchester Metropolitan University that seeks to give a body to the collective memory of the era that would otherwise be forgotten. Led by Dr Beate Peter, a social researcher at Manchester Met, and Abigail Ward, founder of the Manchester Digital Music Archive (MDMA for short), the project has taken the form of a digital map, which users can pin their ‘memories’ to in the form of 60-second audio recordings.

The format of this project is special in the way the strict constraints of the brief audio clip format forces the contributor to focus in on a singular detail. There’s no room to ‘sum-up’ or philosophise and the listener gets an oral snapshot, an organic picture of history based in living memory.

Abigail Ward explained: “The inconsistencies and contradictions between the recordings, where people’s memories differ… there’s something beautiful about that. There is no one history and it’s in the differences that a more complex picture begins to emerge.”

The ‘memories’ themselves are organised into various categories that spread across the Greater Manchester map, namely: Firsts, Friends, Music, Clothes, Drugs, Politics, Environment and After-parties. The user can filter and browse the map using both the specific club locations and these categories to find what particularly interests them. They range from the funny anecdote to the politically resonant tableau.

A few were played during the launch such as ‘What is coming out of my ears???’, in which a first-timer found herself in a pitch black illegal rave under a bridge, felt what she assumed to be blood dripping from her ear only to later realise that the bass had melted her earwax. ‘Champagne for the Gangs’ from a Hacienda glass collector, recalls the illicit gang-activity that regularly took place in the club.

From notorious happenings like a car being driven into a club to first loves and narrow escapes, the archive covers a lot of ground. As a whole it forms a greater narrative, in Abigail’s words, “of visible social defiance, of rave culture as a chance for people who don’t like the establishment to get together and do something, anything”.

Dr Beate Peter added, “I think rave has a bad name in the media, of drugs and crime. People switch-off at the word, as if it was a bunch of no-good people causing trouble.” This is supported by another of the ‘memories’ shared at the event about the “sense of hope that was at the heart of the whole thing, of something about to happen. Everyone was in it together”. It’s also evident in the music itself, in Acid House and the new psychedelia of the Happy Mondays, an energy that’s essentially positive, creative, hopeful.

Drug culture was also a huge part of the Manchester rave scene, but Hacienda DJ and journalist John McCready was keen to point out that he never took anything, and in that he wasn’t unusual. He said, “There were those who came to get smashed and lose themselves and there were those who were there for the music. I was there for the music, you know, and people took an interest.” McCready was also keen to point out the importance, not just of the clubs, but of the record shops and the studios. A member of the audience reported that in her experience as a DJ, commenting: “I would always say that it was the record dealers who were picking the records. The DJs were just loyal enthusiasts.”

There was some interesting discussion about naivety – that in the new technology and unprecedented nature of the whole scene, the ‘winging-it’ attitude of many of the clubs and musicians, there is a sense of discovery which energises all of it with a newness, an originality that is essentially a manifestation of hope. This positivity is detectable in many of the ‘memories’ on the map. It’s a cliche to say that music unites people, this is resoundingly evident after exploring the digital map. The music formed an arena in which so many people could participate in something that felt meaningful and progressive.

This spirit is taken forward into the democratic, user-based format of the digital audio-map. Users elect themselves, select their subject independently and speak in their own voice. The quality of the speaker’s voices is also a huge part of the value of this form of oral history. There’s a directness to hearing an individual person’s anecdote, especially tied to the map in this way, that brings the user closer to the histories on display. The particular accent, manner and choice of words is so important to the project, not just ‘the facts’, and in the freely accessible format of the map, it seems clear that this project is very well thought out. The form is in keeping with the spirit of the particular era, it’s playful, positive and open, yet not polite or particularly well-behaved.