You are here: Home / Culture / “Poetry is for everyone”: Gillian Clarke presents Dylan Thomas for The People’s Poetry Lecture 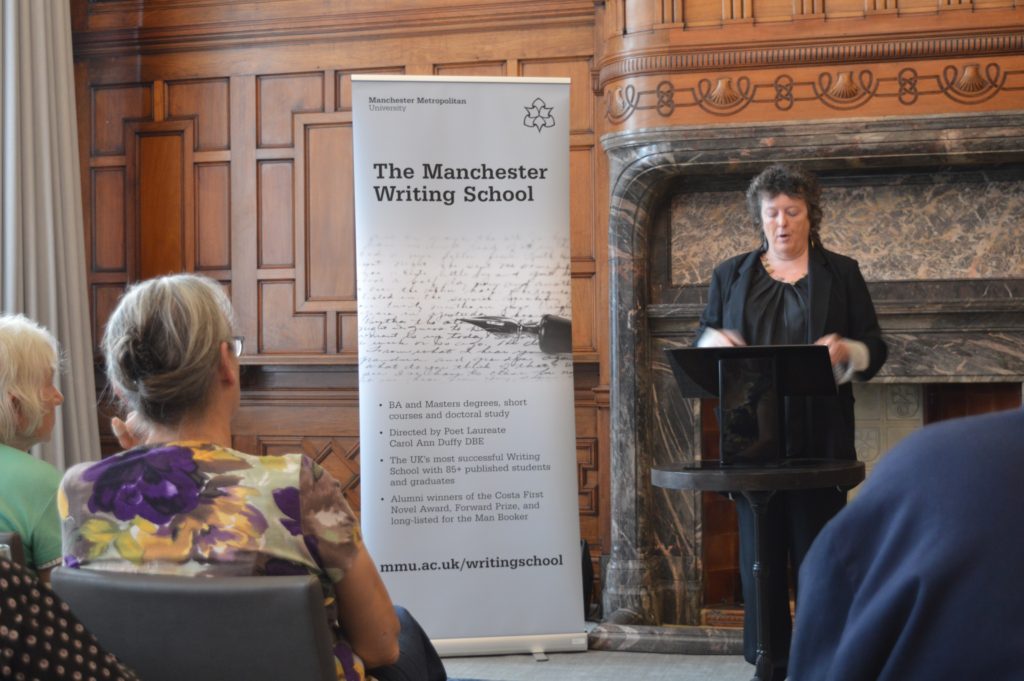 Poet Laureate Carol Ann Duffy joined Gillian Clarke at the Director’s Suite of the Principal Hotel for an evening of poetry and critical discussion. The event titled ‘The People’s Poetry Lectures’, is the first of a series of lectures run by Manchester Metropolitan, featuring established writers  presenting lectures on a poet of their choice. This opening instalment featured Gillian Clarke introducing Dylan Thomas.

Gillian Clarke is a widely celebrated poet, playwright, broadcaster and lecturer from Cardiff, Wales. Her poetry is studied at schools across the UK, and she was awarded the Queen’s Gold Medal for Poetry in 2010 and the Wilfred Owen Award 2012. Her collection Ice (Carcanet, 2012) was shortlisted for the T.S. Eliot Prize in 2012 and she held the position of National Poet of Wales from 2008 to 2016.

Poet and student at Manchester Metropolitan David Keyworth, spoke to aAh! in anticipation for the event. He said: “I’ve always loved Dylan Thomas’ poetry and since I can’t see Dylan Thomas in person then this is the next best thing.”

Carol Ann Duffy opened the event by drawing the audience’s attention to the Principal Hotel, set to accommodate each People’s Poetry lecture. She said: “The idea that is at the heart of the philosophy of the writing school is for the university to come out and embrace such a marvellous city.”

“So rather than people feel that they have to go into a university or a college to hear a poetry lecture they could come, essentially, to a bar and have much more of a relaxed evening. These lectures are for us ordinary people rather than academics”.

“Gillian has a very strong connection to Manchester, she has lived here most of her working life as a poet and all her single poems are published here by Carcanet, so she knows Manchester very well,” continued Duffy, before inviting Clarke to the stage.

Clarke began the lecture by explaining her childhood connection to Dylan Thomas, and how her father’s work as a radio sound engineer lead to him introducing Thomas to her as a teenager.

“He sat me down when I was fifteen by the radio and said ‘listen to this’ and it was Under Milk Wood. And I was knocked out because all of my studies at school were Wordsworth and Shelley and Milton and wonderful Shakespeare and nobody ever spoke a word of poetry in a Welsh accent,” she said.

This connection Clarke has to Dylan Thomas was was a rare insight into the late poet, and Clarke went on to tell amazing family anecdotes related to him: “My father came home and said to my mother ‘we’ve had a genius in the office today, but he had very bad manners”.

Clarke’s critical lecture was separated into two points of interest, the first being the notion of truth. “He has two qualities that only the greatest writers have, and one of them is truth and I don’t mean factual truth […] absolute truth. Not truth gathered from reading other people’s books but the thing he absolutely remembers himself, the very smell or texture of something, of being alive.”

She read an excerpt from Thomas’ short prose ‘The Peaches’, pulling out moments where Thomas simply but clearly captures the core of what it is to be alive.

“That alertness of body and mind to the world and the ability to record and tell it true is remarkable, and thrilling to read,” said Clarke.

“Lesser writers observe, a little apart, reach for the thesaurus, for other writers’ observations, for the expected details, ‘the settle in the corner, the hams on the hooks”.

The second quality that Clarke wanted to highlight in Thomas’ work was the music in hi writing: “Music as the sound of words and truth as an accurate recording of what he heard, saw or felt. He made language new. He woke us with his witty wild way with words”.

Clarke went on to read one of Thomas’ most loved poems, and what Clarke divulged as, to her, “the finest villanelle ever written”: ‘Do not go gentle into that good night’.

Clarke encouraged the audience to imagine the rhythm of a horse’s hooves, saying: “The pentameter of the first line echoes the rhythm of horse and cart on a country lane, a familiar, remembered sound to schoolboy Dylan in his box bedroom in Cwmdonkin Drive, reading his Shakespeare, writing his poems, remembering hoof-beats on The lanes of Fern Hill”.

“It is a real poem,” said Clarke. “A cry of pain which uses the form like hurt skin”.

Clarke finished by reading another poem of Dylan Thomas, ‘Fern Hill’, the audience sighing as if releasing their day’s work with each word.

After the event, Clarke spoke to aAh! to reveal her excitement for the series ahead. She said: “I think it’s a magic idea especially to have it in a glorious room like this, make people feel good, give them a glass of wine. I mean, lots of these people have had an education and some haven’t, or have in another subject, in another field, so I think it’s wonderful. I think poetry is for everyone.

“Surely, when we’re sad, or when we’re in love, lines are in our head, aren’t they? And so I want people to hear wonderful language and love it like I do. It’s such an important thing in my life. […] In my head I’ve got yards of poetry. Yards. […] Even if you don’t understand it, its the sound that rings in your head that is so important.”

“I thought it set the bar very high for the whole series,” commented Carol Ann Duffy. Poet John Fennelly divulged how happy it made him to attend an evening that celebrated Dylan Thomas’ life, rather than romanticise his untimely death. He added: “I think it was great to not see him as a disaster story, but instead as a celebration of his words and as an incredible poet.”