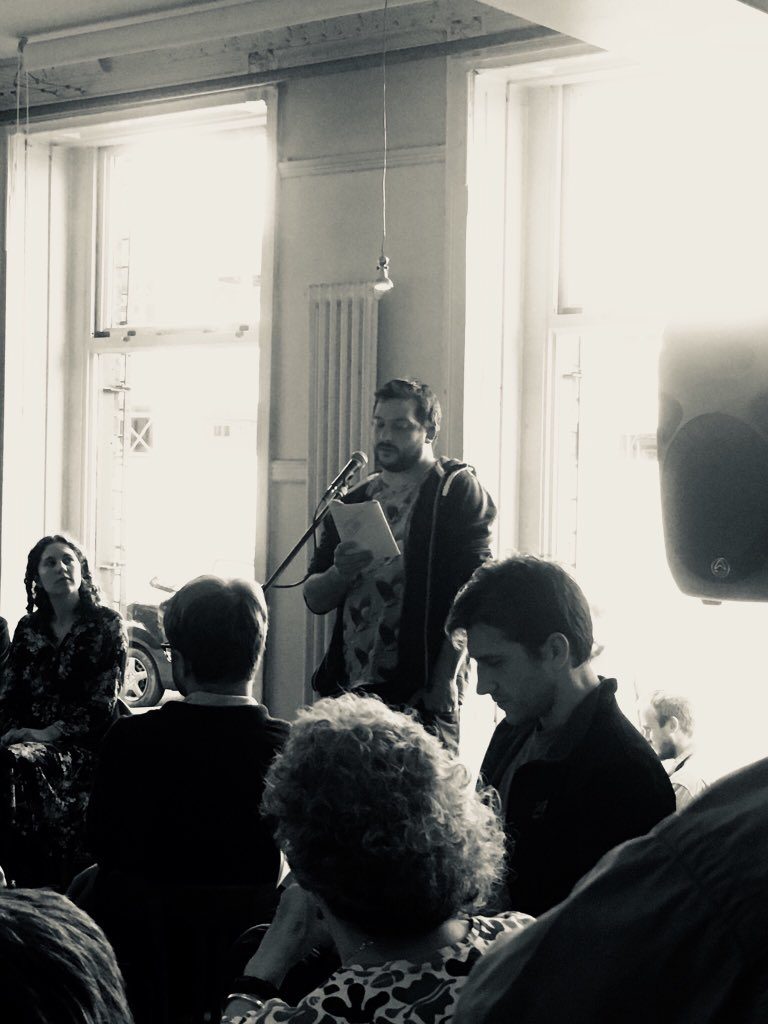 The Manchester Writing School at Manchester Metropolitan University hosts the annual Creative Writing Summer School at their current base, Number 70 Oxford Street. It’s a two day programme organised by manager of the Writing School James Draper and academic director Adam O’Riordan. It’s made up of a series of workshops and talks presented by a team of writers and practitioners from inside and outside the university who work across a great range of disciplines and professions.

Participants attend eight workshops across the two days, with a choice between several sessions in each slot. This gives each student the chance to tailor their own path through the programme, whether that be by focusing on their chosen discipline or following their thematic interests or even in intentionally throwing themselves out of their comfort zones. Interestingly, a lot of people choose the latter.

Some sessions that illustrate the diversity of material and approach on offer at the Summer School would be How (not) to Write Bad Dialogue with children’s writer and lecturer Catherine Wilcox, in which the whole seminar is delivered in irony – a lesson in cliche – and How to Have Your Cake and Read It with playwright, poet and lecturer Anjum Malik. Anjum’s session was a creative workshop on ‘food poetry’ in which students discussed the importance of various foods across all cultures, read some great ‘food poems’ by other writers, then put together a draft of their own. Anjum’s approach is ‘quick-fire’, moving from segment to segment of the workshop with speed and excitement, then diving into writing with little preparation. The poems are then drafted in mere minutes toward the end of the session. This is designed to help writers to avoid overthinking and, in Anjum’s words ‘tune into yourself.’

In stark contrast to this approach was playwright and senior lecturer Julie Wilkinson’s Scripting Peterloo, a session on historical writing and the craft of scriptwriting, was delivered steadily, encouraging much considered thought in the writers. This is important in regards to the nature of the task. As a student put it during a discussion of exactly this issue– “in writing from historical material there’s much to be thought about before the writing can even begin. Something like the Peterloo Massacre is culturally important and so it’s sensitive. It has to be handled with care.” Here again, the method of the workshop reflected this aspect of the creative writing process.

The first day’s sessions were followed by a social at the Righton Building, marking the end of term for the Masters students followed by the launch of project manager of the upcoming Manchester Poetry Library Martin Kratz’s new poetry book. His pamphlet A Skeleton’s Progress traces the metamorphoses and maturation of a projected aspect of a man’s ego over the years up to its ultimate disengagement. The figure of the ‘Skeleton Man’ runs through the whole collection from something like a childhood imaginary friend to a worrying shadow haunting an individual’s imagination. It was a well attended and well received launch at The Sandbar, just round the corner from the Writing School campus.

For students and guests at the Summer School this launch was a great display of the vibrant community surrounding the actual course. Staff, Masters and PhD students as well as alumni and other practicing writers were all in the building intermingled. The school organises and supports a range of literary events throughout the year and the social side of the course is a huge part of the experience. The Masters programme prides itself on diversity and inclusivity and so it’s often the case that some great discussion occurs after taught sessions in readings at cafes and bars around Manchester.

The programme welcomes all levels of writers from people who are curious about engaging in writing for the first time to seasoned practitioners. For the beginners, the structure of the Summer School allows them to experience a broad range of practices. One such writer said– “For me, it’s really important to have a go at novel writing, poetry, place writing … all of it, before I know. It’s just a great chance to find out what I’m really interested in doing, what I’m good at.”

For the current students and practising writers the course acts as a challenge. All the Masters students select a route – Poetry, Novel Writing, Place Writing or Children’s and Young Adult Fiction – and specialise in that route for the duration of their studies. So the Summer School is an incredibly valuable part of the year for them, allowing them broaden their thinking and practice – take a step back from their specialisms.

From learning about the connection between place and suspense in a workshop in the atmosphere of the 17th Century Chetham’s Library with senior lecturer Livi Michael to Developing a Pamphlet with Royal Exchange house poet John Fennelly, the Summer School is dedicated to broadening writers horizons and engaging with all aspects of the writing process from the pragmatic reality of publishing to the nature of inspiration and the responsibilities of the writer.

At the end of the course, during farewell drinks at the beautiful Refuge bar across the road, one student had to say– “What I enjoyed most about the Summer School was the variety of deep and intelligent tutors, the level of creativity and also just the pure enthusiasm for the subjects that was in the air. I feel really encouraged to pursue what I want to do. I’m inspired.”

You can sign up to next year’s Summer School at www2.mmu.ac.uk/english/courses/short/