You are here: Home / Interview / Manchester / Opinion / A red line with a dark message: tackling domestic violence through drama 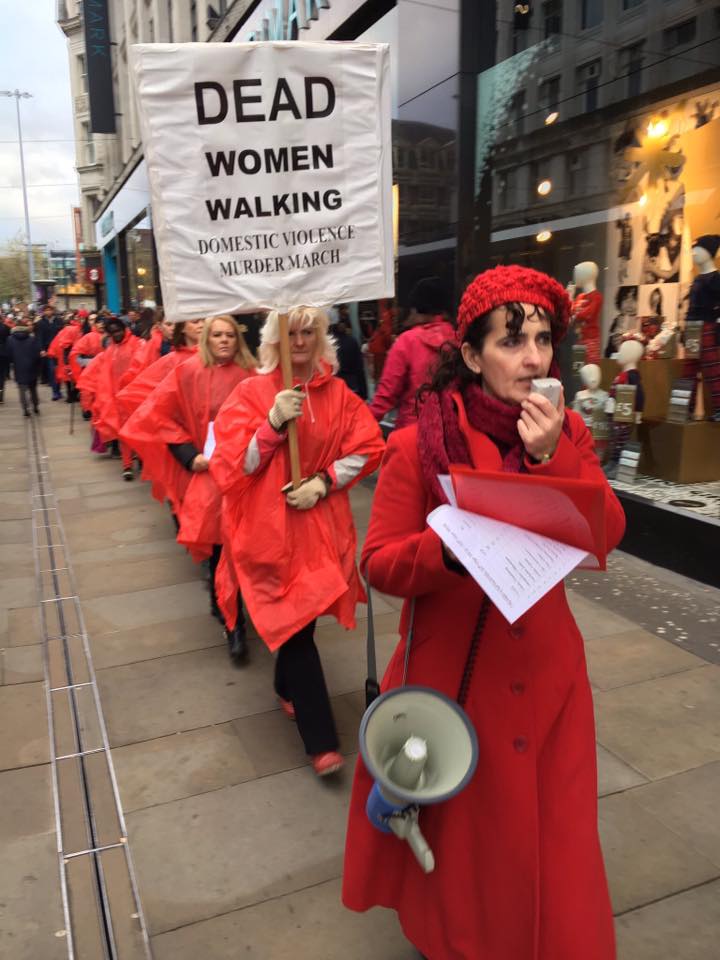 A UN study last week reported that the most dangerous place for women is the home. The report on gender-related killing of women and girls, conducted by the United Nations Office on Drugs and Crime (UNODC), found that 58% of women killed last year were killed by partners or family members.

The shocking results of the study were published on International Day for the Elimination of Violence Against Women. The UNODC findings suggest that there is no sign of a fall in the number of killings, with an estimated 137 women killed by family every day. 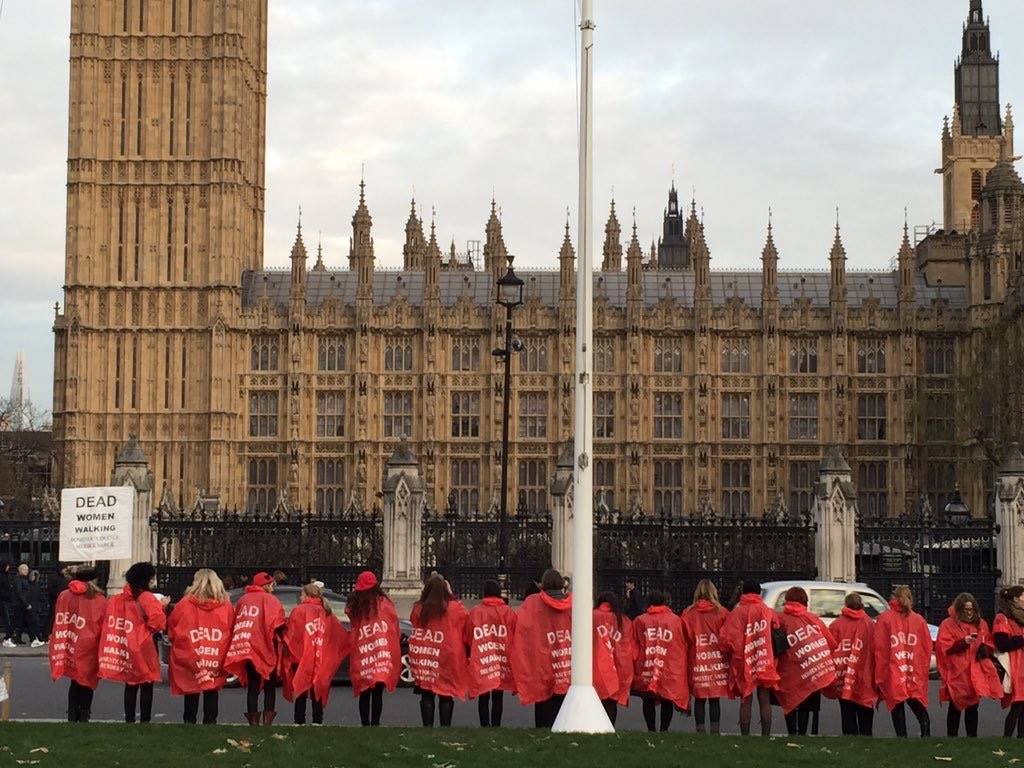 Dead Women Walking march 2015: Protesters march to the Houses of Parliament to push for the ratification of the Istanbul Convention

In response to these statistics, the Dead Women Walking march was launched, aiming to raise awareness of the issue, and remember the victims of domestic violence each year. The first ‘Peaceful Murder March’ was held in London in 2014. Women marched to Downing Street to deliver a list of women killed by partners or family members in a bid to give a voice to those silenced by domestic abuse.

Moore set up Certain Curtain alongside John Woudberg in 1989. They hoped to create work that made a difference and served the community.

“We always knew when we set up that we wanted to do unusual work, stuff that raised awareness of human rights and social issues,” said Moore.

“We wanted to explore real people’s challenges and lives and help audiences walk in someone else’s shoes.’” 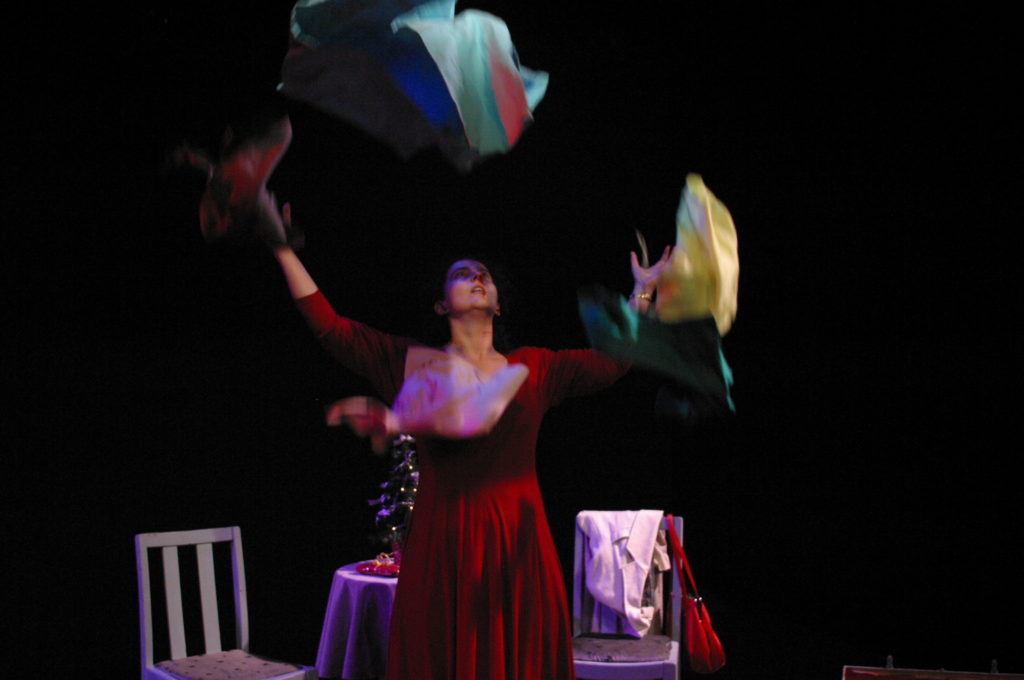 Lady In Red: Claire Moore in a production of ‘Lady In Red’ challenging the question: why doesn’t she just leave?

“It’s important that we focus on a victim’s story and try to move past the age-old question: ‘Why doesn’t she just leave?’ Instead we want to ask – Why doesn’t he just stop?”

Moore said: “People are often horrified by the language used. Women are routinely blamed for the violence and abuse we experience.”

She mentions an interview conducted by Eamonn Holmes on daytime television with a rape survivor which finished with the comment: “I bet you wish you’d taken a taxi home that night!”

“We need to be reaching the general public and constantly challenging these things,” said Moore.

She believes live drama is a great way to do this: “Audiences respond well and connect emotionally with an issue. We don’t forget what our emotions put us through – the message stays with us for longer.”

The Dead Women Walking March was an extension of this principle, giving a voice to silenced women and forcing people to confront the realities of domestic violence.

This year, the march was held in Manchester. The event was supported by charities and support groups like Trafford Rape Crisis, a free and confidential service for women affected by sexual violence. Rebecca Hall, a member of Trafford Rape Crisis Collective spoke of how powerful the experience of marching was.

She said: “It’s an emotional and even difficult experience, walking in silent tribute as those names are read out. But when you see people stop to listen or look at the photos of women lost due to domestic violence murder, there’s some solace in knowing we’re not letting those women be forgotten.

“We shocked some onlookers, a red line with a dark message.”

“We show how survivors or victims of abuse can have an integrity and strength that the outside world doesn’t see.

“Domestic violence and marital rape are still under the radar in terms of understanding,” she added.

She went on to talk about the difficulties of staging productions that tackle such serious issues, saying she’s had to lie about a play’s content in order to reach a wider audience.

“People think ‘who wants to go and see a play about domestic violence?’ They think it will be like Eastenders, very shouty and pushy.

“Our approach is to come from a human spirit aspect. A lot of our work has a kind of rhythmic poetic script. It lifts us from the shouty stuff and gives a beauty to a very horrific kind of story.”

Studies suggest that one in three women will experience domestic violence in their lifetime, but Moore thinks this is just a symptom of a larger societal problem.

“Gender inequality is at the base of it – it’s about ownership. It’s part of a higher patriarchy of our society. Look at the legal system; childcare; every aspect of our society. There is inequality there that needs to be addressed.”

This is a view supported by the UN’s report. UNODC executive director Yury Fedotov said: “Women continue to pay the highest price as a result of gender inequality, discrimination and negative stereotypes.”

What can be done then to tackle such a deeply engrained social problem? Moore believes the key lies in education.

“We always need to do more. We ought to be doing stuff in primary schools and helping young people understand these issues. We’d like to do a project that explores healthy relationships, friendships and respect. 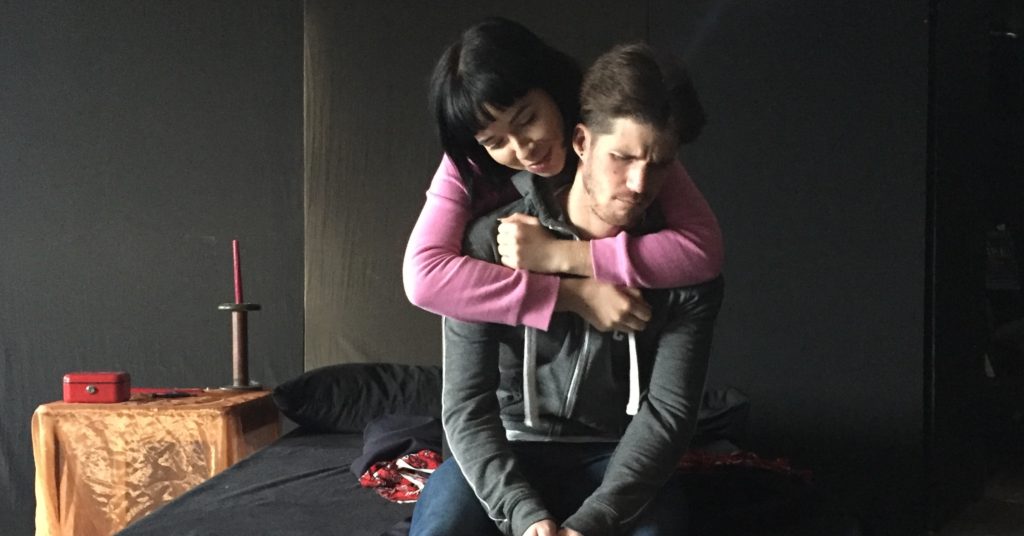 “I won’t stop until I see some more positive change – it’s not happening quickly enough,” she said.

Does she think that the battle for gender equality and women’s rights is getting harder?

“There’s an idea that we’ve gone too far now – some men don’t know how to behave on dates anymore because they’re frightened of being accused of abuse.”

She went on to say that the noise surrounding trans-activism is having a negative impact on the fight for women’s rights:

“It’s a reinforcement by another movement of gender stereotypical roles, the kinds of roles we’ve been fighting for centuries,” she said.

“It’s an unpopular view and I know a lot of people are afraid to speak out because they’re afraid of losing their jobs. Women that are challenging gender ideology are being called biological essentialists as if biology doesn’t matter.

“But biology is the thing that has oppressed us for years.”

So what’s next for the theatre company? Moore said they are about to tour a production of Woman on Fire about a Lancashire suffragette, exploring the violence and sexual abuse suffered by women fighting for the vote.

“I hope people who are reminded of what the suffragettes went through are ready to take up the baton,” said Moore.