You are here: Home / Culture / News / Singin’ in the Rain @ Opera House review – a dreamscape in technicolour. 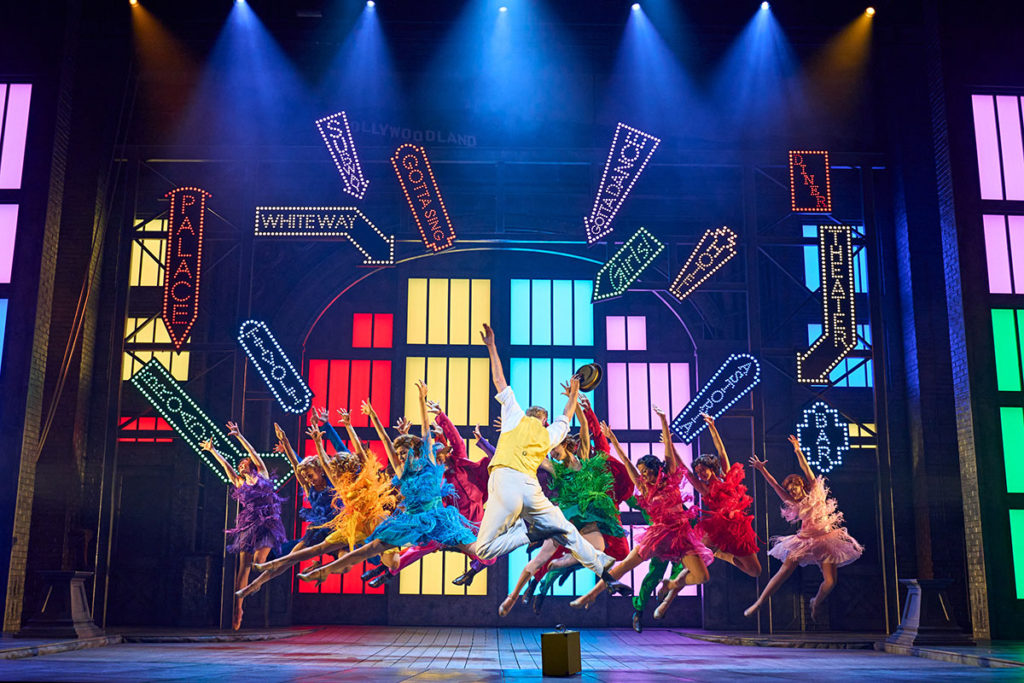 Good morning, good morning! You don’t have to be a scarlet on the rise to know of Singin’ in the Rain, as even the classic “doo-dle-doo-doo” of the titular song with Gene Kelly’s iconic dance is referenced, parodied and beloved today. Performing as part of their UK 2022 tour, the stage adaptation made quite the splash at the Manchester Opera House.

A celebration of cinema set on stage, Singin’ in the Rain kept the same screenplay as the 1952 original, written by Betty Comden and Adolph Green, and used Nacio Herb Brown and Arthur Freed iconic score and songs. But, what director Michael Harrison did was reinvigorate the film and translate it into theatre for both old and young.

Of course, based on the legendary Hollywood film by Metro-Goldwyn-Mayer, the story captures all the glitz and glamour of the late 1920s. With the revolutionary introduction of the ‘talkies’, superstars of the silent movie Don Lockwood (Adam Cooper at selected venues only) and Lina LaMont (Jenny Gayner) must adapt to the times or be forgotten to history. Studio musician and best friend Cosmo Brown (Ross McLaren) lends a helping hand as Don becomes enamoured with the ingénue Kathy Selden (Charlotte Gooch) whose golden voice may be Lockwood’s key to success.

Singin’ in the Rain is home to many of the multi-talented cast, who all showcased their singing, acting, comedy, ballet, jazz, tap, slapstick, vaudeville, and waltzing skills. They had a lot to live up to as they could have just given a washed-out duplication but instead, they had a fresh charm and choreography to go alongside their on-stage character. The show is like clockwork, where every aspect must be in perfect harmony with each other, and the cast did this with unbothered ease. It’s refreshing to see a production that actual spotlights the ensemble rather than keeping them in the shadows.

Cooper, Gooch and McLaren commanded the stage with grace and goofiness as the loveable trio, each adding something special to the role. Cooper had buckets of presence as Don, Gooch had lashings of magnetism as Kathy and McLaren was drizzling with charisma as Cosmo. But, Gayner stole every scene she was in, especially towards the end, with her impeccable comedic timing. The principal characters were rich with a downpour of brilliance.

Speaking of rich, this production had budget. It’s the epitome of theatricality from the costumes to the lighting, the audience was not only transported to 1920s Hollywood, but to scenes of beauty. Certain numbers like the ‘Broadway Ballet’ were a memorising attack on the senses, with vivacious colours and dazzling lights. Singin’ in the Rain also utilises tools and techniques unmined upon in theatre, creating an inspiriting experience for the audience. The show is truly a dreamscape in technicolour.

Criticism for the show is fair but few. One being excess. Though the show is a standard running time for a musical, each scene is long and played up to the masses. The ham and “over-acting” is conventional to vaudeville and slapstick and works well, but some audience members will be thinking “when is it over?” or “stop showing off”. The second criticism is there’s a lack of emotional investment, where you may never feel truly connected to the characters, but rather feel like just spectators in their journey.

Singin’ in the Rain won’t have anyone turning on the waterworks or have people singing their songs in the shower, let only the rain, but what it is is a dynamic and visionary tribute to the original and other classic musicals of the silver screen.

If you grew up watching the golden age of cinema, and/or love that genre of music and show, be sure to check out Singin’ in the Rain, it’s a show you don’t want to mist… miss.

Singin’ in the Rain has ended its performance at the Manchester Opera House, but are still on their UK Tour 2022.