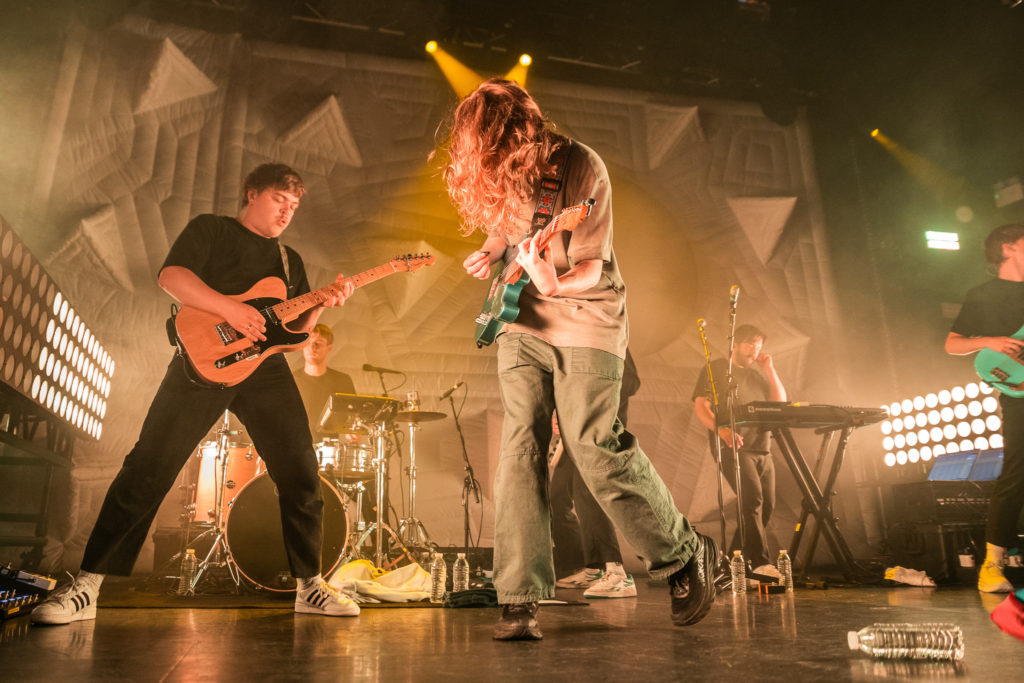 After a long-awaited return, Manchester was graced by the presence of girl in red. After rising in popularity during the pandemic, it was no surprise the Norwegian singer-songwriter had sold out Manchester’s O2 Ritz 1500 capacity venue. It was clear from the buzz around the room, that the fans were excited for her first Manchester show since the release of her debut album if i could make it all go quiet.

The stage lit up brightly as the band began to play the intro of ‘You Stupid Bitch’ and Marie Ulven Ringheim, to give her real name, burst onto the stage. The energy was unparalleled, fans had packed themselves into the ground floor to get in on the action, leaving the balcony looking spacious. It was as if this song was written to be performed live as the crowd sang along loudly and matched the energy on stage.

After the first song, girl in red announced to the crowd that she had “some good news and bad news”. The bad news was that she was suffering from singer’s nodes, which meant the doctor had advised her to be on vocal rest; the good news was that she decided to still come and perform on her UK/EU tour. However, it did mean there was a shuffle of the setlist and some difficult songs to sing were left out, even if they were fan favourites. One notable song missing was ‘I’ll Call You Mine’.

However, it didn’t seem to stop girl in red from putting on one of the best performances Manchester has seen in a while. The updated setlist mainly consisted of songs from the new album, a highlight being ‘Did You Come?’ in which it was announced, “this song is about cheating”. The atmosphere for this song was relentless as the crowd jumped up and down, putting on their own energetic performances.

girl in red also played her older fan-favourites from her EP chapter 1 such as ‘girls’, in which members of the crowd held up their own pride flags. One person had caught the singer’s attention and handed her a gift of a pride flag with Ringheim’s face featured on it along with a letter. During the performance, flowers were also thrown onto the stage, showing the fans’ appreciation for the singer.

It was clear girl in red wasn’t just a singer to this audience of mostly young teenagers, she is an adored queer icon. Ending the night with one of her queer anthems ‘i wanna be your girlfriend’, halfway through the song she encouraged the crowd to widen the formed mosh pits hoping “this is going to be one of the biggest circle pits ever seen”, and as the chorus erupted again the crowd went crazy, singing along loudly and bumping into one another. Before the song ended, girl in red shouted that “this night isn’t over yet” encouraging the crowd to put away their phones and have their hands up in the air. As the ending of the song played on, girl in red went to the back of the stage and ran, launching herself off the stage, over the barrier, and into the crowd’s arms. Cheers echoed around the venue.

girl in red’s performance was captivating, relentless and energetic, and although it was advised she shouldn’t do the tour due to her vocals, it was barely noticeable due to her excellent singing and animated performance. The only downside to this gig was the crowd were left wanting more, the set didn’t feature an encore, but girl in red promised she would be back soon, and we for sure want to be there.