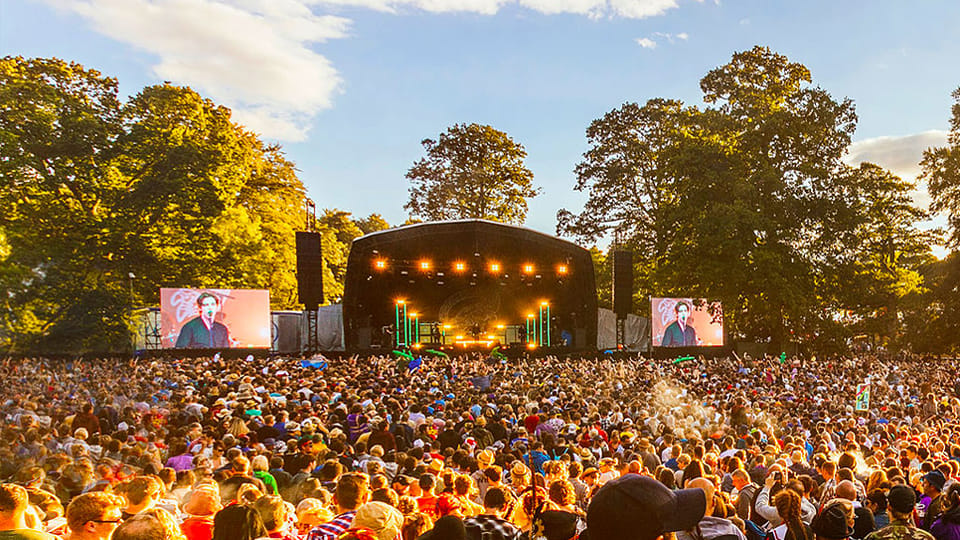 It’s not long now until the hordes of people will be descending on the Lake District’s much-loved festival ground, Lowther Deer Park. After two years of consecutively being cancelled its set to take place from Thursday 28 July to Monday 1 August.

If seeing your favourite artist in front of the most picturesque background in the country is on your list, you need to book your tickets quickly. 98% of tickets have been sold, and you can get yours here.

Topping the bill on the main stage are Supergrass, Stereophonics, and Bastille, who are all guaranteed to put on a show to remember. Headliners aside, there are some other artists that you need to see too – from gritty-rock band Millie Manders and The Shutup to glitter-fuelled indie band The Wombats, they have it all.

Millie Manders and The Shutup

Describing themselves as “High-octane, fierce, bursting with attitude and almost obnoxiously addictive”, Millie Manders and The Shutup know exactly how to capture the sound that they desire. Rallying the cause for mental health, they’re at the forefront of the future of the industry. Their latest album, Telling Truths, Breaking Ties, is a high-velocity dive into heartache and political anger, making it a non-stop thrill ride. Their track ‘Silent Screams’, perfectly captures what it feels like to be trapped and highlights how slick the band performs together – the unexpected twist of a saxophone is perfect against the overlaid vocals. Getting ready to perform at Kendal before taking over Europe this autumn with their “Life Is a Rollercoaster Tour”, catch them while you can.

Bringing her slacker-pop tracks from the Isle of Wight, Lauran Hibberd makes every stage she steps on her own. High-kicking and jumping around in her dayglo and usually frilled outfits, her performances are truly unforgettable. She has been consistently knocking each release out of the park and her latest release is no different. ‘I’m Insecure’, sees her successfully try her hand at rapping while voicing everyone’s thoughts. Creatively, nothing is off limits and that includes her topics too – from step mums to sugar daddies. Collaborating with the likes of Lydia Knight on ‘How Am I still Alive?’, and DJ Lethal on ‘Still Running (5K)’, Hibberd has also been championed by tastemakers, such as Jack Saunders and Roy Stride from Scouting For Girls – it’s clear that she’s one to watch. Her eagerly anticipated debut album Garageband Superstar, will be arriving on August 19th and will coincide nicely with a tour around the UK, starting in September – this is your chance to get a sneaky live preview of what’s to come.

Originating from West Lothian in Scotland, the indie-rock band has been riding high and show no signs of slowing down. After forming in 2015, they’ve gone on to make history as the first Scottish band to achieve a UK Number 1 for 14 years with their debut album, W.L. Their performance as a band is flawless, and frontman Jack Cochrane’s vocals are unquestionably distinctive. Taking on the classic track ‘Summer In the City’, they made it their own, while becoming the soundtrack of the summer and Strongbow’s advertisement. Their live shows are always centred around their strong connection with their fans, the atmosphere when performing their wonderfully uplifting number ‘Glasgow’, is something else. We’ve already had a taste of their forthcoming album Burn The Empire, which sees the band take a more defiant and politically-centred move. Another explosive addition to their already polished arsenal, it’ll be released on October 7th. There’s also an autumn tour to celebrate its arrival. Catch their set to see what the well-deserved fuss is about before their sophomore album hits the shelves.

Everyone’s favourite bubblegum-goth band will be making their way to the Lake District this summer after performing all over America while supporting 5 Seconds of Summer. The band’s chemistry is unmatched and they consistently deliver. Their tracks are empowering, their lyrics are raw, and the audience’s energy is quite possibly combustible. The band’s debut album, My Mind Makes Noises (2018), began their trajectory of uniting soul-bearing lyrics with melody-driven tracks. Their dance-inducing track ‘There’s a Honey’, is still a fan-favourite for a reason. Every track on their sophomore album, Who Am I?, especially the lead track ‘Change’, successfully unites others by tackling themes central to the human experience – from having an identity crisis to heartbreak. Their latest track ‘Jealousy’, sees the band take more of a heavier rock turn while maintaining the same degree of heart they’ve become known for. Their forthcoming album Unwanted, will arrive on August 12th, and they’ll be marking its release with a November tour. If you’re considering getting to the barrier for a band, make it this one to hear these hits before they’re on the radio.

Indie heavyweights, The Wombats will be arriving in Cumbria to ensure the weekend will be anything but a greek tragedy. After around two decades since forming a band together in Liverpool and over 1 million albums sold worldwide, they’re still regular on the 42s DJ playlist and on every major radio station going. Listing off hits such as ‘Moving to New York’, ‘Let’s Dance to Joy Division’, and ‘Lemon to a Knife Fight’, they belong centre-stage at every festival. If there was an award for the band with the wittiest lyrics, they would have it. Combine this talent with their penchant for constructing dreamy soundscapes and catchy choruses, their longevity becomes quite explainable. After releasing Fix Yourself, Not The World earlier this year, it went straight to Number 1 in the UK Album Charts, and is set to be another guaranteed hit in the live arena. Despite containing the track ‘Everything I Love Is Going to Die’, it’s more hopeful than at first glance. They’re also touring this August and October, but if you don’t want to wait until then or merely take our word for it – make your way to their set. If you turn up, you could be screaming their lyrics at the sun (rather than the moon) and throwing banquets in mosh pits, just as you should.

With many more acts to explore, you’re guaranteed to never be bored. The hardest part will be navigating the clashes but nobody can ever grumble about the pitfalls of too much choice – or the potentially unforgiving British weather. Pack your wellies and we’ll see you in the fields because when a festival looks and sounds this good, it is definitely unmissable.