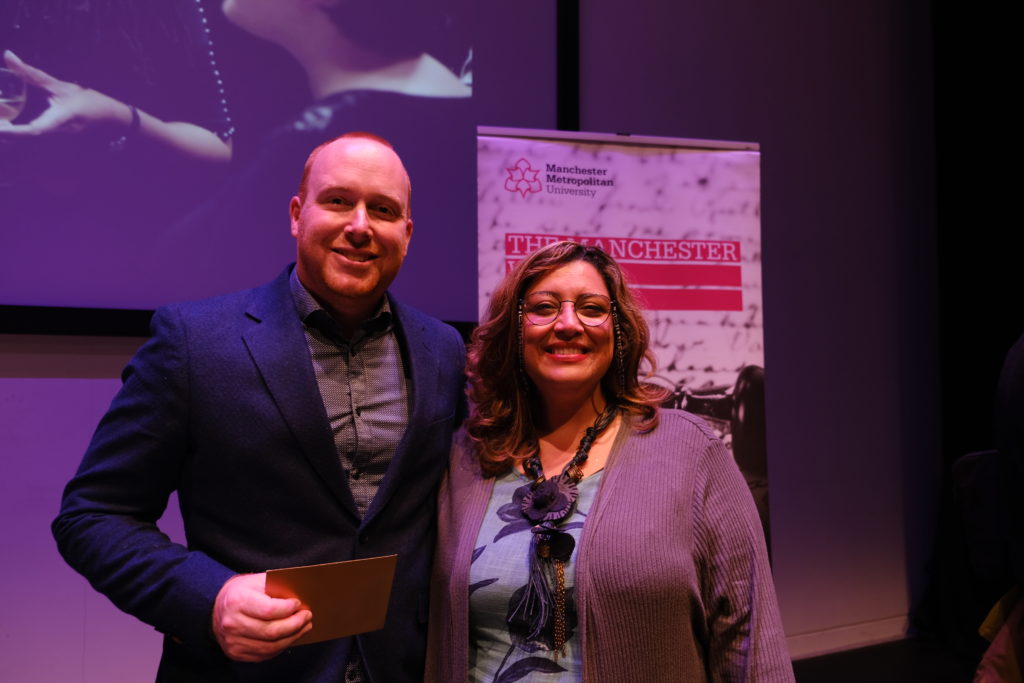 Each winner was awarded £10,000 in prize money for their winning entries as their fellow shortlisted writers, judges, and members of the public convened at Manchester Met’s Grosvenor East building for the ceremony.

Newly built, its ‘an inspirational venue for training the next generation of actors, writers, journalists and linguists’, Grosvenor East is also home to the university’s dedicated poetry library.

Founded in 2008 by Carol Ann Duffy, the competition has become the country’s most established awards for unpublished literature, with more than £200,000 given to its successful prizewinners over the years.

It’s open internationally for both acknowledged and amateur authors, with those on the panel not privy to any personal information about the writers during the judging process.

The gala was hosted by James Draper, manager of the Manchester Writing School, and Matthew Frost, former board of trustees member for the Manchester Literature Festival.

Draper and Frost introduced the ceremony with an entertaining repartee, while noting the achievements of all those shortlisted and in attendance.

The first fiction readings of the evening then ensued, opened by Birmingham based writer Danny Beusch and his entry titled, ‘The Firm’. He was preceded by Shelley Hastings who read ‘What I Have To Tell You Now’, and fellow shortlisted writer Sarah Hegarty who shared her piece ‘The Ishtar Pin.’

Ahead of the ceremony, Hegarty spoke to aAh! about the sense of community she’d found being shortlisted for the prestigious prize. She said: “I still can’t believe I’ve been included in such an impressive group and wonderful community of writers. Everyone has been so encouraging and welcoming.”

The first run of poetry finalists then took to the stage, with Courtney Conrad performing ‘They Called Us The Cursed Year’, for which she received copious rounds of applause.

The poet didn’t even plan on entering her work at all: “It was truly a surprise to be shortlisted. I submitted because my friend didn’t want to submit alone, so I said why not, and for it to be my first time entering, Glory to God.”

She was followed by judge Zaffar Kunial, who read on behalf of American-based poet Laura Paul Watson, whose poetry portfolio is a response to her 2021 breast cancer recurrence.

“Poetry can feel like a very solitary practice. I sometimes forget there’s an audience who I can reach [out] to and who reaches back,” she shared in the run up to the event.

“The Manchester Poetry Prize has reminded me of how supportive and far-reaching the poetry community is. Even though I haven’t met the other short-listers, I feel proud to be in their company.”

Peter Ramm, who travelled from Australia for the event only the day before, recited his poem ‘Landfall’ to draw the first round of poetry finalists to a close. Speaking before the prize-giving, Ramm told aAh! that being shortlisted gave him “affirmation that [he] was on the right path”.

He added: “It’s a great thrill to be shortlisted! It was quite a surprise, but it’s incredible to think that somebody on the other side of the world saw something in my work. I also think it’s a wonderful thing to be in a community of writers.

“I don’t want to be too cliche, but it’s beautiful to be with like-minded people. To share the journey together, and to be with those who enjoy language and exploring where it can take the reader – and the writer as well.”

The audience then heard from the second round of fiction writers, led by Leone Ross and her short story, ‘When We Went Gallivanting’. Before the ceremony, she recounted profound moments of her career facilitated by primary fiction panel judge, Nicholas Royle.

“[Nicholas] published the second short story I ever published. I remember it: I was in my twenties and I was scared, the opportunity had come at the last minute. To this day, I remember him being so enthusiastic, and so supportive of my weirdness as well, which I love. It feels like it’s come full circle.”

Canadian physician, Nicholas Ruddock then shares his piece ‘Sweet Boy’, and Naomi Woods closed the fiction readings for the evening with her short story ‘Quarry’. Then, the final trio of poets, Jane Wilkinson, Alyza Taguilaso, and April Yee, each read excerpts from their shortlisted portfolios.

Yee chatted with aAh! beforehand, sharing in her enthusiasm for being shortlisted: “It was a real surprise to be shortlisted, and also a real delight. We were given proof of the poems before they went out, and it was just a special secret excitement to be able to see the work of all the other shortlisted poets. To be able to delight in the fact that our work was sharing this really wonderful space. Just now I’ve got to meet some of the other poets in person, which was really lovely.”

Draper and Frost wrapped up the readings by introducing Manchester Poetry Prize chair and judge Malika Booker to the stage. In her closing speech Booker told the crowd how she had “goosebumps” from the talent showcased in this year’s shortlisted portfolios. Booker was followed by fiction judge Simon Okotie, who stepped in for Nicholas Royle in his closing speech. Okotie claimed it was “almost impossible” to pick a winner from this years’ shortlisted fiction stories.

The time then approached that every shortlisted writer had been eagerly awaiting: announcing the winners. Booker went first, mimicking a drumroll by tapping her nails on the podium in enthusiastic anticipation, before announcing that Peter Ramm had claimed first prize with his exceptional portfolio of poetry. The audience erupted into applause.

Ramm, in elated disbelief, addressed the audience: “It is with immense gratitude, thanks, and a lot of surprise, that I accept this prize. I feel deeply honoured just to be counted alongside the amazing poets on this year’s shortlist and a great sense of debt to the esteemed judges Romalyn Ante, Malika Booker, and Zaffar Kunial who spent so many hours poring over the entries and who saw something in my work.

“My many thanks to Carol Ann Duffy and the Manchester Metropolitan University for pioneering and persevering with this prize. We are all here tonight, as a result of what was begun all those years ago.

“Writing, and poetry in particular, is not an easy road to tread. There are many rejections, little acclaim, and almost no income, but we are a stubborn bunch, us poets; who seek to not only observe our own lives, but also to honour language, and let it unlock so much more than an ordinary existence.

“It is truly wonderful to have a journey from the other side of the world to be in this room tonight, to celebrate words that have been forged in all corners of the globe, on many roads, and through many lives.”

Hilaire then filled in for Royle, declaring Leone Ross the £10,000 winner of the Manchester Fiction Prize. Ross’ voice caught in overwhelming emotion during her acceptance speech, the audience soon feeling the weight of what this accolade really means to its writers.

“I have such affection and respect for the Manchester Prize – one of few in the UK that celebrates the short story so very generously. Whether subversive, experimental or just thumpingly good old fashioned story-telling, the Fiction Prize reminds us that the short story is a fluid space for amusement, beauty and politics alike,” Ross told the crowd.

She continued: “‘When We Went Gallivanting’ is about the increasing gap between rich and poor, about dancing in the face of injustice, and it imagines a reclamation of joy in the very architecture around us. The story celebrates every-day miracles, not least its lead character, Athena Righteous-Fury, a fat, Black woman, surviving and thriving and inspiring just as she is.

“My deepest thanks to the judges, for their time and consideration in the name of Carol Ann Duffy, who established the prize. To know that you’re trying and becoming a better writer, for that effort to be acknowledged, is a very special experience.”

Reflecting on Ramm’s win, Malika Booker articulated what it really was that gave Landfall the edge above the others. She said, “We the judges were delighted with the sublime poetics, where the poet’s language cartwheels with lyrical dexterity. Each poem in this submitted portfolio pulsated and bewitched us judges into reciting lines to each other, while luxuriating in the musicality of the language, and the richness and beauty portrayed.

“We were impressed with the poet’s ambitiousness and confidence, and seduced by the opening lines. Our winning poet’s masterly controlled line breaks contrast sharply with the majestic woodland portrayed. We felt that this was contemporary poetry at its best.”

Meanwhile, Simon Okotie observed Ross’ risk-taking to set her apart from the rest of her peers: “It was incredibly difficult to choose a winner, but at the same time when I first read Leone’s piece, I thought this is one of the best stories I’ve ever read. As a first time judge I didn’t expect that to be the case. I thought there would be some exceptional stories, but to read a story like that it’s just amazing.

The judges for the Manchester Poetry Prize were Malika Booker, Romalyn Ante and Zaffar Kunial. Read all the shortlisted poetry portfolios here.

The judges for the Manchester Fiction Prize were Nicholas Royle, Hilaire and Simon Okotie. Read all the shortlisted fiction here.