You are here: Home / Culture / Music / News / Hot Milk & Pale Waves @ O2 Victoria Warehouse review and gallery – The venue size may have changed but how personal their music feels never will 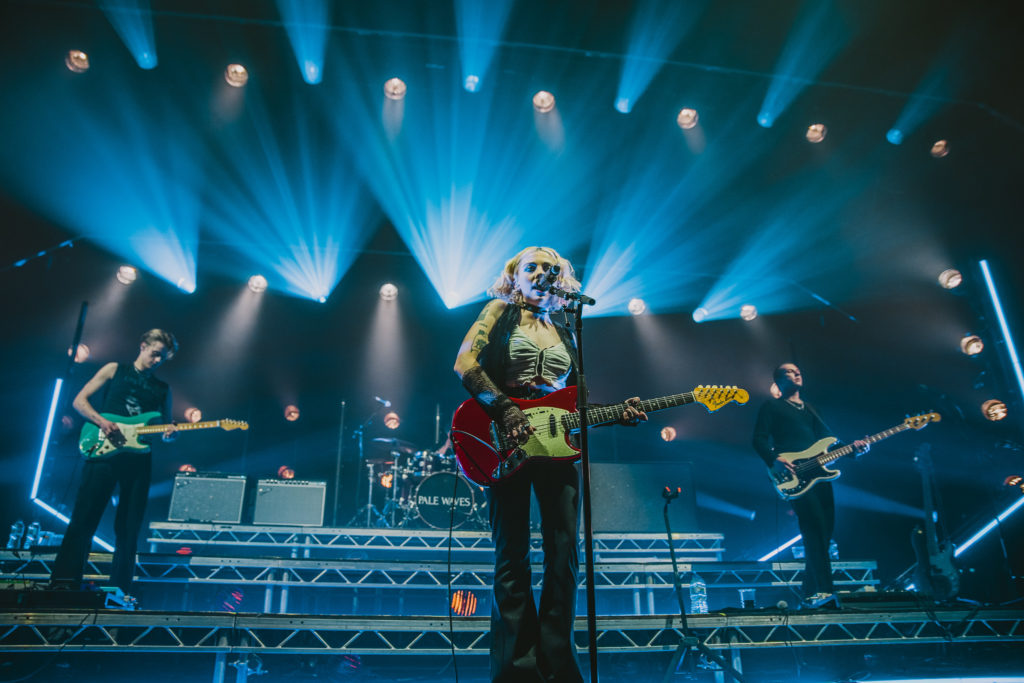 Re-affirming their position as leaders of the outcasts and underdogs, goth-pop band Pale Waves, have proceeded on a journey of self-discovery and triumphed. Finally bringing their latest album Who Am I? (2021), to Manchester’s O2 Victoria Warehouse, where 3500 people were ready to have their chance to hear the songs as the band attended – live music uniting a community together. Acting as a hearty hometown welcome for both Hot Milk and Pale Waves, this was yet another glittering reason behind the compelling atmosphere in the room.

Providing twice the lead singers, twice the power, Hot Milk is a passionate emo power-pop band. The palpable energy from the crowd was met by the band urging them to have a f***ing party, as their voices boomed around. Announcing “We are Hot Milk” spurred the crowd on further as most already knew the band and if not, loved them by the end of it. Their opening with ‘Split Personality’, saw Jim Shaw inciting the audience to get on the floor and bounce up with the liveliness of a Jack in the Box. Already grabbing the crowd by the throat, ‘I JUST WANNA KNOW WHAT HAPPENS WHEN I’M DEAD’ saw the band giving their all with Hannah Mee energetically on the floor playing guitar. Their energy quickly became a hallmark of the show and they consistently whipped the crowd into a stupor.

Their chemistry is obvious, as is their ability to create a party atmosphere wherever they set foot. They recognise that as much as their music is about celebrating who you are, showcasing the flipside is just as important. Despite being centred on the darker times, the live performance of ‘I Think I Hate Myself’ is a reminder that everyone is part of their community. Before they could jump into the next track, an audience member was trying to sing happy birthday to Mee. Spending her birthday with her fans, the connection between them is indisputable. Mee lifting the mic is a powerfully defiant image, as is spotting two audience members with their arms outstretched on another’s shoulders. It just reiterates the sincere relationship between artist and audience.

Featuring a thumping beat, ‘Bad Influence’ almost sees the pop-punk band verge into metal territory. It has to be noted that if a stage is a coke bottle, Hot Milk is the mint added – mixed together there’s going to be an expected explosion. Chucking water at the crowd, it’s surely needed for them to cool off after mirroring the energy of the band measure for measure.

Ending on ‘Candy Coated Lie$’ and ‘Awful Ever After’, they’re saving their most-loved tracks for last. Holding their guitars over their heads like trophies, they’ve certainly proved that when it comes to showmanship, they deserve gold.

Infamous American band, The Whispers, used to croon that, “It just gets better with time”. They clearly had Pale Waves in mind when writing that track. Pale Waves may have been on the live circuit for a substantial amount of time but from the get-go, they knew how to put on a show. Often compared to bands such as The Cure due to their goth-pop symphonies, there’s more to them than rippling beneath the surface of musical aesthetics. Finally touring their latest album, Who Am I?, we seem to have come even closer to answering who Pale Waves are.

Entering to a thumping beat that surely echoed the rising heartbeat of everyone in the room, their first track ‘Change’ exceeded all expectations. Due to Covid, everyone had clearly had time to become word perfect and with Heather Baron-Gracie pointing her mic to the crowd, they’d clearly prepared for this moment.

Despite exploring who they are on the new album, they’re not a band to forget their roots. Listing of soft synth tracks such as ‘Television Romance’ and ‘Eighteen’ saw the crowd jumping and putting everything into it. The audience duetting ‘One More Time’ with Baron-Gracie while surrounded by red lights was evocative of their debut album, My Mind Makes Noises. Keeping a few other classics in their setlist, another fan-favourite from their arsenal, ‘My Obsession’ spotlighted Baron-Gracie finishing on the words, “I’ll never stop loving you”. Juxtaposed with newer numbers such as the melodramatic ‘Fall To Pieces’, saw the band prove that their hearts have always been in the right place when it comes to their music.

This emotional sentiment was carried into their track described to be about giving everything up to be with them, ‘Wish U Were Here’ was heart-wrenching. It saw Baron-Gracie sitting on the floor, sharing this intimate moment with the crowd. It’s a relationship that goes two ways, with Baron-Gracie also complimenting the audience for having “amazing style” and hearing them cheer back.

Their acoustically led tracks are just as powerful as their more upbeat offerings. ‘Odd Ones Out’, really highlighted how honest the band are. Another track from their newest album ‘Easy’, was also beautifully emotive in its simplicity. Contrasted in the set with their almost pop-punk track ‘Jealous’, it’s the Avril Lavigne and Pale Waves crossover track we never knew we needed.

Beginning the encore with Baron-Gracie speaking off-stage the words, “I saved her and she saved me”, immediately indicated that we were finally going to hear new fan-favourite, ‘She’s My Religion’ live. It prompted the question that perhaps their debut album was leading to this moment of unleashing a new layer of honesty. The final track, ‘There’s a Honey’ saw Baron-Gracie go into the crowd, breaking down the barrier between them. The venue size may have changed but how personal their music feels never will.

Whether fans turned up to the show due to loving them since the beginning or due to their latest album is inconsequential. What matters is showing up for the band who aims to create a safe space for others, highlighting that the live shows which had been sorely missed due to Covid-19 are irreplaceable. Community spirit can’t quite be captured over Zoom and the future for the continued return of gigs is looking bright.

Pale Waves’ latest album Who Am I? is available on Spotify or for purchase from their online store.