You are here: Home / Culture / News / Footloose @ Manchester Opera House review – a toe-tapping musical that never quite found its footing 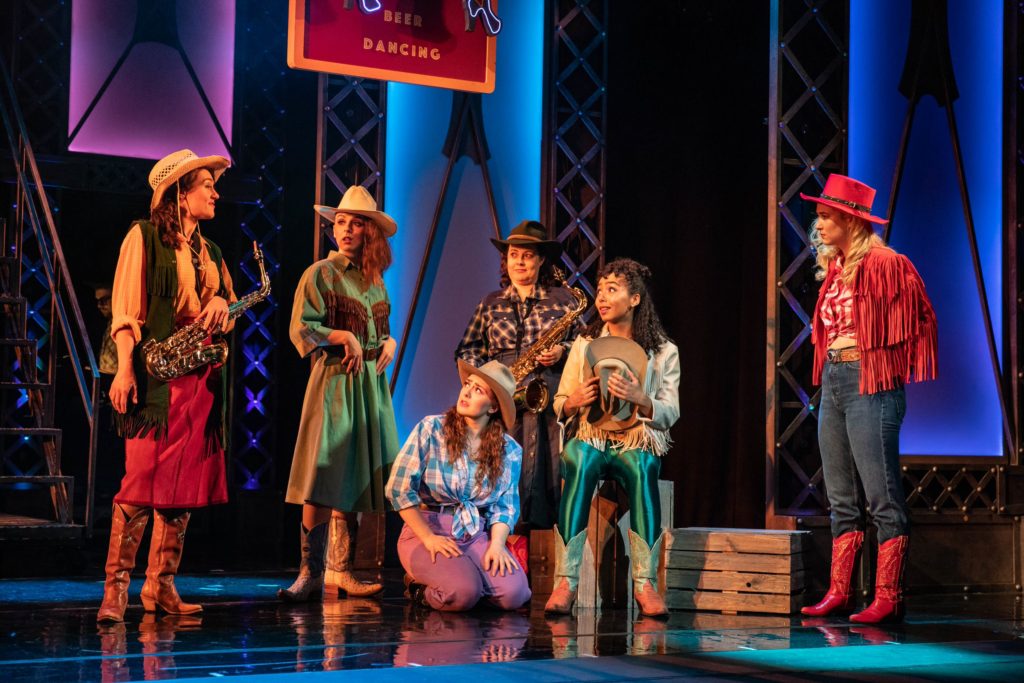 Kick-off those Sunday shoes, Footloose The Musical comes to Manchester in their 2022 UK Tour. With a star-studded cast and an atmosphere filled with 80’s love, the show had a lot of heart and soul but didn’t bowl me head over heels.

Adapted from the beloved 1984 movie on the same name, Dean Pitchford and Walter Bobbie brings this small-town story onto the big stage. With music by Tom Snow, as well as additional songs from a plethora of 80’s icons such as Kenny Loggins, fans of the movie will have fun with this jukebox musical. But for the audience who may be unfamiliar will perhaps struggle to be as energised and cut loose’ as the titular song intends.

City Boy Ren (Joshua Hawkins) moves from lively Chicago to dead as a dishwater Bomont, a small religious town with Reverend Shaw Moore (Darren Day) at the helm. A place that’s so strict that even dancing is banned, and Ren wants to put an end to this. After meeting Willard Hewitt (Jake Quickenden) and developing a relationship with the reverend’s daughter, Ariel (Lucy Munden), the upbeat urbanite causes chaos as he attempts to re-introduce the love of moving your feet back to Bomont.

The talented cast, who played their own instruments, added an extra impressive level to this show’s strength. Especially Hawkins who played the protagonist with nostalgic fun and a palatable aspect of cheese. The musical advertised West-end and TV actor Darren Day and Dancing on Ice winner Jake Quickenden as the star attraction, both of who performed with high personalities. However, all of the characters weren’t written as the most original or multi-fascinated, making an intriguing or memorable depiction hard to achieve. But, it was clear that the actors were enjoying themselves which in turn made it impossible for the audience to not have an enjoyable time.

A special shout-out to Rusty, played by Oonagh Cox, who turns what could have been an archetypical performance of the ‘lovable dummy’ into a fresh re-incarnation with great chemistry alongside Quickenden. Cox knows how to play dumb smart.

The music was extremely lively, and who doesn’t love a sing-a-long? The audience got more involved as their favourite 80’s pop song was integrated into the musical, helping with the atmosphere at the Opera House, with the cast bouncing off the energy of the crowd, resulting in a vibrant experience. Act 2 was significantly better because of this effervescent ambience.

Saying this, I don’t think Footloose is a musical for me, and by proxy, a musical for students. I would describe it as a pantomime for Mum’s, with the singing and jokes that catered to that specific humour. There’s a song with Quickenden that reveals to gold short… only, that was just there to please the parents.

Another reason why the shoe didn’t fit was, and this sounds strange to say, but I was too sober.  This show will be thoroughly enjoyed with a group of friends who can let loose, (not too loose as we still need to be respectable to the theatre) and succumb to the feel-good aspect of the show. Act 2 got better because the audience allowed themselves to get silly and have fun. But were they laughing with it or laughing at it? That’s for you to decide.

Go see Footloose if you love the movie, if you love anything from the 80’s or if you just love a good sing-a-long. The musical is not serious, and shouldn’t be taken seriously. It does have some faults in the book and direction that made it not for everyone but overall, it is a vibrant show with a gifted cast who have ‘been working so hard!’ (That’s the beginning of Footloose, the show will remind you how good Kenny Loggins is.)

Footloose The Musical has ended its performance at the Manchester Opera House, but are still on their UK Tour 2022.