You are here: Home / Culture / News / Emily in Paris’ Jean-Christophe Bouvet: ‘Pierre displays a childlike behaviour and a decadent madness that make the character friendly’ 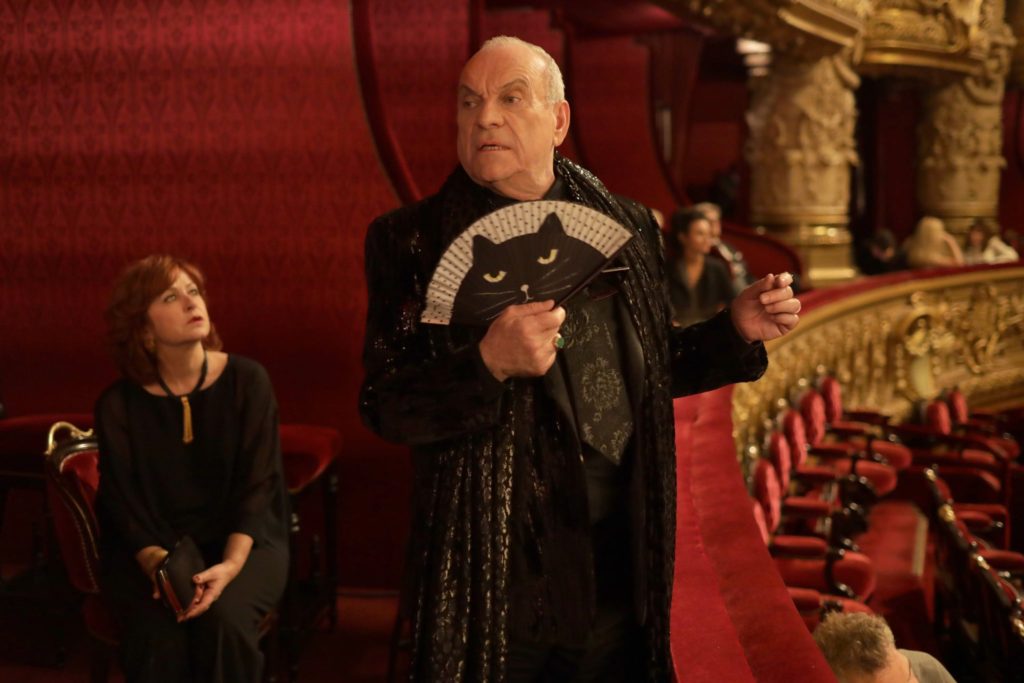 Hold on to your berets, Emily in Paris has been renewed for two more seasons. Created by Sex and The Citys’ Darren Star, the American comedy-drama first premiered in October 2020 and has been a mainstay in Netflix’s arsenal ever since.

During its first 20 days on Netflix, 58 million people were drawn into the fast-growing series. and after the second series premiered in December, it ranked in second place on Netflix’s Top 10; just missing out on the top spot to The Witcher.

After Emily Cooper’s (Lily Collins) boss in Chicago becomes pregnant, Cooper is sent in her place to Paris to work at Parsian-marketing company, Savoir. It is here that the electrifying events unfold, from flourishing romances to extravagant parties. We are living vicariously through our vivacious protagonist.

There is nothing ‘Ringarde’ (french for cheesy and tacky) about Bouvet’s character, Pierre Cadault. He is immensely fashionable and fiercely flamboyant. First introduced as a once hip designer in need of a comeback, he doesn’t appear to be based on one single fashion designer. However, parallels could be drawn to other real influential figures, such as a French version of Donatella Versace. Smashing creme brulee while wallowing in self-pity, and gossiping about Dan in Gossip Girl with Cooper are but two of his most memorable scenes.

What drew you to the role of Pierre Cadault?

I was excited and curious to work with an American production of this magnitude, by the glamour, which brings together the world of fashion and the world of entertainment, of which I am a part as an actor. Climbing the steps in Cannes during the festival has a lot to do with a fashion show. I feel very comfortable in these mundane events. For the story, I was conceived in Nice’s only palace on the French Riviera: Le Negresco.

Do you have any specific similarities or differences with the character of Pierre Cadault?

I have the impression that the cinema draws me more towards an intellectual process while the world of fashion represented by Pierre Cadault pushes me to have a more artistic approach. The same happens if these features are present at home, the character of Cadault goes very far with narcissism and exhibitionism.

Do you have a favourite scene or line in the series?

I have been especially entertained by the crème brûlée scene in season one. Pierre displays a childlike behaviour and a decadent madness that make the character friendly. It is a nod to the film Amélie by Jean-Pierre Jeunet.

Do you have any favourite behind-the-scenes memories from the show so far?

The filming sequence at the Opéra Garnier where Pierre Cadault evokes Dan and the Gossip Girl series. Lilly Collins was amazed by the openness with which I spoke of the series when I didn’t know at all what it was about. She mentions this anecdote jokingly in an interview on the internet.

At the end of season two, Emily answered a phone call deciding her fate at Savoir. What do you think she decided?

I think she’s going to leave Savoir to follow Sylvie in a new adventure.

Emily in Paris has been confirmed for two more seasons. What are your hopes for Pierre Cadault and the show?

In the last episode of season two, Sylvie says that she is going to take the staff with whom she worked at Savoir with her. As a client, Pierre Cadault is part of this staff. I would like the veil on Cadault ‘s private life, about which we don’t know a thing at the moment, to be lifted.

In season two, while Emily isn’t in the room, the characters speak in French. Has switching between languages caused any problems?

I have lived many years in London surrounded by French and English speakers, what got me used to switching between languages all the time. I enjoy this intellectual exercise in my job as an actor.

Do you think the writers go it right with their representation of French people?

We can blame Emily in Paris for playing with clichés about the way the French criticise the laid-back attitude of the Americans, but this is not far from the truth.

How would you spend your day off from filming?

I’m currently writing my memoirs, which will become the subject of a book and a film entitled Pépé Poire which is the masculine of Mes Mémoires and the homophone of Mémé Moire.

Outside of the series, what are you working on or enjoying doing?

I am currently promoting two feature films: Les Indociles by Jean-Marc Barr and Down in Paris by Anthony Hickling. I really enjoy taking the journalists to the Café Beaubourg to taste the wonderful hot chocolate they serve.

Is there anything you’ve never been asked but wish that you had, If so, what would it be?

What are your favourite composers? (Proust Questionnaire) My answer would be Perotin the Great and Germaine Taillefer.

Watch Emily in Paris on Netflix.