You are here: Home / Culture / News / Emily in Paris’ Bruno Gouey: ‘Like Luc I have empathy and a certain nonchalance and distance from authority’ 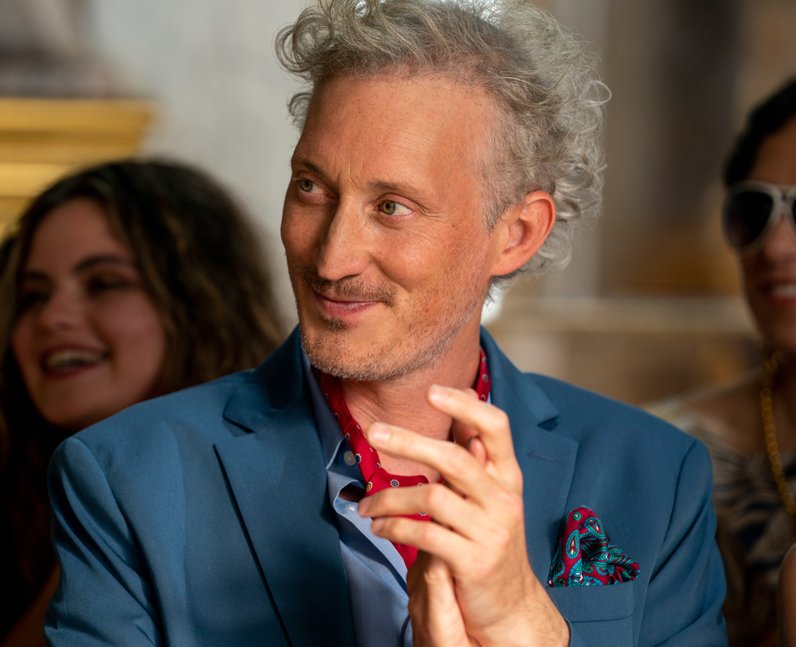 In a prolonged period where travel has been impossible or highly difficult, Netflix’s Emily in Paris, offered an escape to most. The American comedy-drama was created by Darren Star, who was also the creator behind Sex and The City.

After first premiering in October 2020, it’s become one of Netflix’s most popular series with over 58 million people glued to watching it within its first 28 days. Last December, the second series was released and was in second place on Netflix’s Top 10, losing out the top spot to The Witcher. While recognising its widely-reported controversy, it seems the public really has spoken as it’s been renewed for at least two more seasons.

After taking her boss’ place to offer an ‘American perspective’ at French marketing company Savoir, Emily Cooper (Lily Collins) trades Chicago for Paris. Depicting Cooper, sauntering down the idyllic Parisian streets and sampling French cuisine prepared by the on-off love interest Gabriel (Lucas Bravo) – which despite following the cliches does have enough substance to balance out the style. The seemingly perfect view of Paris may initially draw you in but the ever-unfolding drama will be sure to hold your attention.

Known by most as Luc and ‘Mad Scientist Guy’ by Alfie (Lucien Laviscount), the well-humoured employee at the Parisian marketing company Savoir has been warmly welcomed by audiences around the world. He was the first of the employees to take her under their wing, after refusing to call Cooper ‘Plouc’ – meaning ‘hick’ and ‘country bumpkin’. His most memorable scenes include taking Cooper to a graveyard on her birthday and taking her to “Truffaut’s favourite cinema”. In true Luc fashion, it features a ménage à trois.

In a bid to find out more about how Gouery received the role, aAh! Magazine caught up with him over email, where he also revealed his favourite scene, and thoughts on the series.

What drew you to the role of Luc?

This role attracted me for several reasons. First the project, the series itself. From a professional point of view, the prospect of working with American teams was new for me. Then the combination of talents at all levels – the production, the writing, the technical and artistic teams – was extremely motivating. It’s the kind of production that pulls you up, allows you to learn and progress by confronting yourself to the very best.

Luc’s role was also a way of conveying through humour a certain view of France and the French people. I felt that being able to create an eccentric and atypical character would give me the opportunity to have fun.

Do you have any specific similarities or differences with the character of Luc?

As with any character that you play, you have to both put a little bit of yourself and find feelings in the character that are less familiar to you. It’s a mix.

I share with Luc a certain joviality and extroversion. Like him, I have empathy and I have a certain nonchalance and distance from authority.

Unlike Luc, I’m more of a concealer. There are more masks behind which I hide. Luc has no filter, he doesn’t calculate, what comes to his mind is immediately affirmed, hence his tendency to make a blunder.

Do you have a favorite scene or line in the series?

I have a lot of them! In season one, I really liked the scene on Île St Louis where Luc explains to Emily the differences between French and American culture. In season two, I had a lot of fun playing the gaffe scene in front of Lucien Laviscount (Alfie) at La Samaritaine.

Do you have any favourite behind-the-scenes memories from the show so far?

I assure you that the atmosphere is wonderful between actors. I have a lot of good memories and I made friends with the whole cast! I speak and I sing in Italian with Philippine (who is French-Italian like me), I have a lot of fun with Samuel [Arnold], Lily [Collins], Lucas [Bravo], Camille [Razat], William [Abadie], Lucien [Laviscount] or Ashley [Park] who introduced me to the board game Catan. It truly is a stimulating and very warm atmosphere.

At the end of season two, Emily answered a phone call deciding her fate at Savoir. What do you think she decided?

I have my thoughts about this but unlike Luc, I conceal them.

Emily in Paris has been confirmed for two more seasons. What are your hopes for Luc and the show?

Such good news! Two additional seasons is so rare! I hope Emily doesn’t neglect her former colleagues! And that Luc continues to introduce her to French culture with humour and lightness.

In season 2, while Emily isn’t in the room, the characters speak in French. Has switching between languages caused any problems?

No, that doesn’t pose a particular problem. On the contrary, I find acting in different languages is fascinating. I am bilingual in French and Italian. I also understand the dialect of the region of Bergamo where my mother is from, I grew up in the suburbs of Paris where the accent is not the same as in Paris. All this to tell you that languages and accents fascinate me. I love to mimic verbs tics and accents. Besides, I often amuse my partners with my accent when I speak English, except that in this very case I don’t force anything. It’s natural… unfortunately.

The perception of life is not exactly the same in one language and another. For example: in French to talk about the sea we say “la mer” which is feminine. In Italian, we say “il mare” which is masculine. Well, I assure you that the perception of this element is not the same. In French the sea becomes a welcoming, warm and maternal element, in Italian, it is something masculine, virile, more dangerous. Perception changes radically. I could give many more examples. And in English, there is no masculine or feminine gender for nouns. It is also an important difference in the way the language is felt.

When I act in English, because I’m not familiar with the language, I tend to insist on facial expressions and gestures because unconsciously I must be afraid of not being understood as well. Here again, gestures vary from one country to another.

It’s a real pleasure to act in different languages, it really enriches the acting.

And the Emily in Paris series gave me an extraordinary opportunity: to be able to reach people and cultures all over the world. I received messages via Instagram from Chile, Iran, the Philippines, Korea… it’s incredible.

Do you think the writers got it right with their representation of French people?

Their own representation of the French is conveyed by the gap with their American culture and this needs to be respected! We are not always our best judges. I often judge the French with Italian eyes and the Italians with French eyes, and it is this sidestep that makes me see the qualities and flaws of each person.

I can testify that the authors of Emily in Paris have grasped something of the truth, because you wouldn’t believe the number of foreigners who ask me for selfies or come to talk to me in the streets of Paris saying: “This is incredible, I experienced the same thing as Emily when I arrived in Paris!”. I was very surprised and that explains the success of the series. This is the best compliment that can be made about the authors’ work.

Emily in Paris has highlighted several cultural differences. Are there any which you have personally noticed?

Yes of course. And it was through the character of Luc that I was able to express them. In Season 1, Luc tells Emily, “You live to work, we work to live.” I find this quite accurate. In the same way, Luc complains to Emily about happy endings in films and affirms that he prefers the real representation of life which always ends tragically. These are two different cultural perceptions I noted.

Outside of the series, what are you working on or enjoying doing?

Outside of the series I am like any actor. I read scripts, I prepare roles, auditions, I act in plays, I write… I have many passions and activities. I love travelling, reading, drawing, music, football. And especially with the pandemic, I realised how precious conviviality between friends and family was to me.

Watch Emily in Paris on Netflix