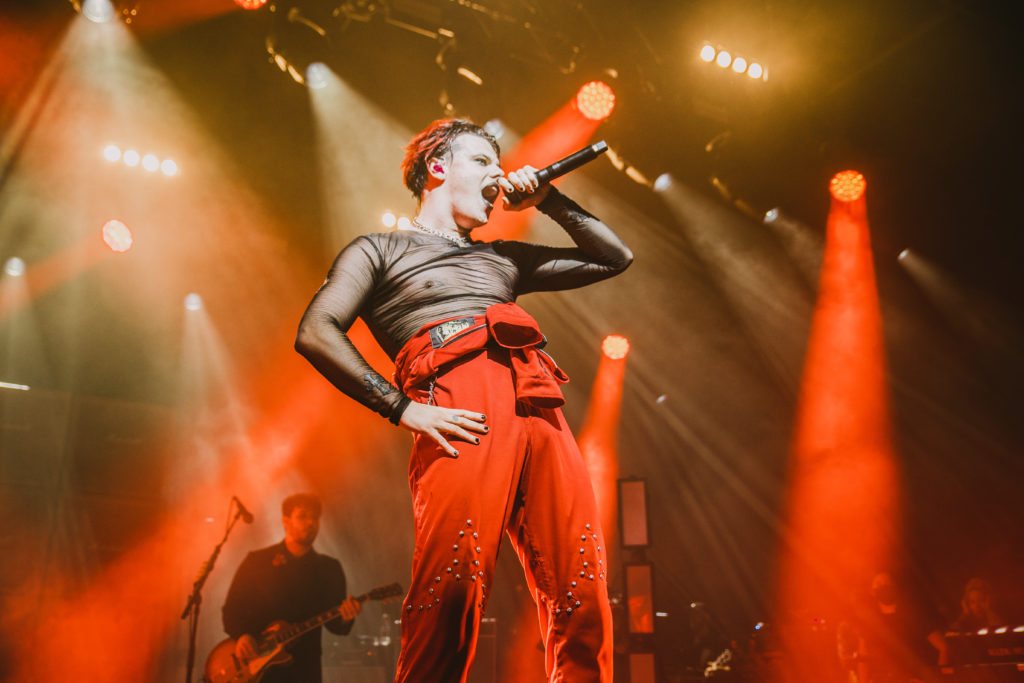 The energy in the room was infinite. The atmosphere buzzing and intense as fans who had camped out the night before clung to the barrier to keep their spot secured. A black curtain covered the stage as everyone in the crowd anticipated when they’d get a glimpse of 24-year-old Dominic Harrison, AKA, Yungblud.

Yet the audience at Manchester Victoria Warehouse were in for something else. A pair of red lips adorned the black curtain, asking the crowd questions in Yungblud’s distinctive donnie accent. Each query was met with cheers and screams of excitement.

Eventually, the curtain dropped as spotlights flooded the stage and a silhouette appeared. Yungblud looked thrilled to be back performing in Manchester with two sold-out headline shows. He strutted towards the crowd, grinning from ear to ear, decked out in a red jumpsuit, matching red signature style creepers and, of course, his fingernails and lips painted black.

Opening with ‘Strawberry Lipstick’, the first track from his latest album Weird!, the fans were sent into a craze. The set continued with his latest hits and old favourites, the songs that got him to the place where he is now, with an army of supporters and loyal fans.

The energy on stage was relentless as Yungblud went from ‘Parents’ into ‘Superdeadfriends’ and the fans hung onto every lyric. The amount of interaction between Yungblud and the crowd was charming, as he ensured everyone felt welcome, and made the venue a safe-space, even going as far to implement gender-neutral toilets throughout the venue.

Latest single ‘Fleabag’ had the crowd moshing from the front to the back, as Yungblud encouraged those who wanted to get involved in the action to move into the middle, and those who didn’t were told: “Get out of the way as you might die!”

Later, ‘Love song’ gave the crowd a chance to catch their breath before diving straight into a cover of ‘I think I’m OKAY’ by close friend Machine Gun Kelly, a track which he featured on, giving all his energy as he made it his very own.

Finishing the main set with emotive track ‘teresa’, Yungblud briefly exited the stage before continuing onto the encore. ‘god save me, but don’t drown me out’ cued a heartfelt, anthemic singalong that could rival any arena show.

Lastly came fan favourite ‘Machine Gun (F**k the NRA)’ from debut album 21st Century Liability, which gave fans one more chance to give it their all. Yungblud’s performance was energetic, captivating and a refreshing welcome back to live music. We are looking forward to what he brings next to a new generation of music culture.