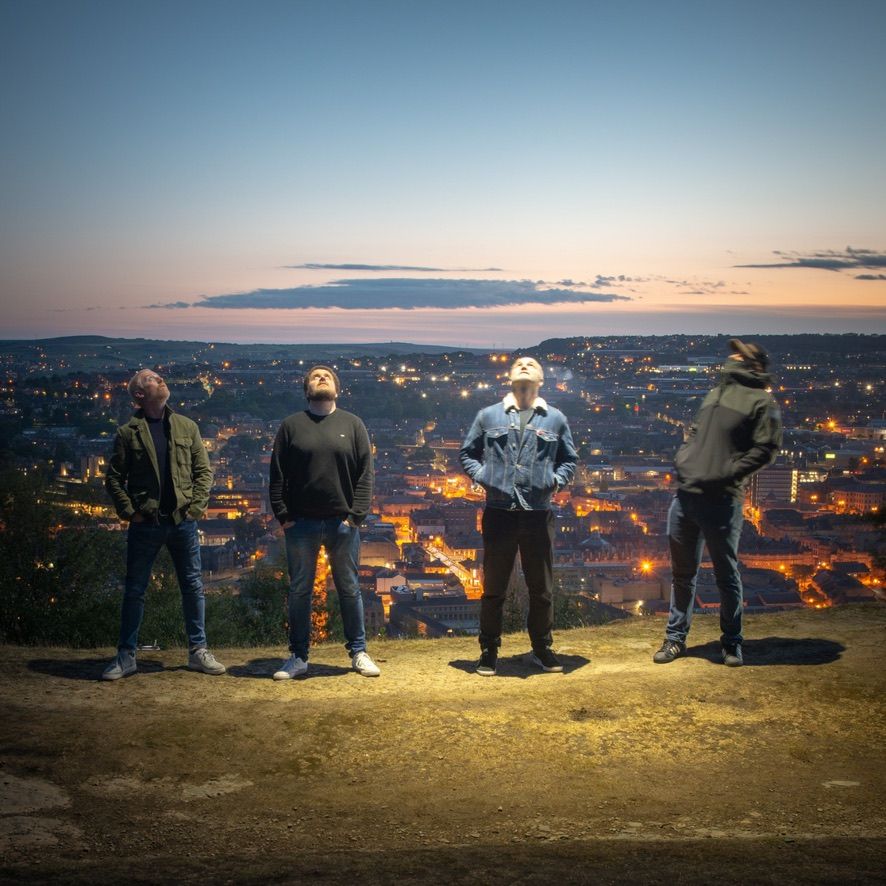 Imagine if Pink Floyd and Depeche Mode had a child and you may come close to capturing the sound of Casino Rockets. Boasting a unique approach to rhythm and always wielding a relentlessly captivating melody – the band certainly know how to fuse synths and rock to create a genre of their own. The Halifax-based band consists of Tiv Whitaker (vocals and synths) Rick Anderson (guitars and vocals) Dan Lea (bass, synths and vocals) and Chris (drums).

The band decided to shoot their shot in 2017, by working towards the release of several successful singles, including their commanding rock track, ‘Black & Red’ (2018), and the guitar-driven groove, ‘Fired Up’ (2018). After playing together for the last thirteen years and recording music on and off since 2002, the band has been consistently crafting their debut, Reality Distortion Field, as shown by their inclusion of ‘Black & Red’ on the album.

Their debut album, Reality Distortion Field, was produced by Steve Whitfield, who has previously worked with the likes of The Cure, The Mission and Jane Weaver. It was mastered by Dez Ford, known for working with Scenius, The Fossil Collective and Klammer. The band has noted that their album is about “persistence and perspective, a journey from the bleakness of the mundane to the exhilaration of elevation; an adventure between the rock bottom and the summit”.

An eclectic mix of trip-hop and electronica combined with psychedelia and classic rock are heard across the album and despite contrasting technically, it remains cohesive as a body of work. It’s perhaps something that shouldn’t work but just does. This is the crux of what makes Casino Rockets so special.

The beginning of the album is heralded in by ‘Impala’, which begins with a thumping beat. A track which is based on an alternating view between a lion and an impala, they discuss how both can strive for equal success in life. Almost acting as an anthem for the underdogs, its uplifting lyrics are as powerful as the slick instrumentals powering the track. The synth and electronica are unmistakable, however, blended with the melodic riffs, it’s a perfect start to the album.

Beginning with a countdown, ‘People Like You’, is an honest and perceptive view of the people surrounding us. The guitar-powered melody almost possesses a haunting quality and thrives in its realism. ‘Only Light Can Save Us’, begins as a soft ballad, building up to a dramatic crescendo as Tiv Whitaker’s voice leads the track. Despite its title, it’s beautiful hopeful and proves the band can easily tackle heavy instrumentals with as much ease as the softer numbers, like those heard earlier on the album.

Longtime fans of Casino Rockets will recognise the track ‘Black & Red’, which contrastingly boasts softer vocals with crashing guitars and drums. It captures an intensity that Pink Floyd would be proud of. The changing tempos throughout only serve to remind the listener that this is a band that has honed their craft together for over a decade. The voice-over in the final section also proves that the band’s creativity knows no bounds.

‘Drive Me to the Dusk’, is another example of the band’s intention to inject some excitement back into the rock genre. At their live gig, this would be the track that would demand a fervent mosh pit. Powered by a relentless beat and Whitaker’s impassioned vocals, the band contains enough energy to incite a riot.

The creation of the final and longest track, ‘Kachumber’, adds to the notion that there are no weak links on the album and the band painstakingly ordered the album with the tracks in mind. It’s certain to be a fan-favourite. The track itself begins with an upbeat electronic melody, which is accompanied with Whitaker’s soulful vocals, proclaiming, “clean my soul with the music”. It was long in the making and was almost abandoned several times, as the band didn’t feel that they could capture the sound that they were striving for. As the band stated, “The idea persevered and continued to evolve right up until the final mix, eventually becoming what we consider to be a melancholic epic that we feel is a powerful climax to the album.”

The band also reflected, “Finally hearing the album and holding it in our hands means such a lot to us.” They added, “When we set out to write and record Reality Distortion Field we were driven by a passion to create the sound of the band we aspired to be; a sound familiar to our ears but yet to be heard. This has been a deeply profound experience, the realisation of a dream. The question that now excites us the most is: where do we go from here?”

Ultimately, their question of where they will head next on their journey to music industry domination can only be answered by their next release. Judging by their previous efforts, it’ll certainly be unexpected, thought-provoking, and perfectly crafted. Their answer couldn’t be more exciting and we look forward to hearing their new material.

Their latest album, Reality Distortion Field, is available on all major streaming services. You can purchase a vinyl copy here.

Keep up with Casino Rockets: