You are here: Home / Opinion / Opinion: Squid Game and what our obsession with the show says about the society obsessed with it 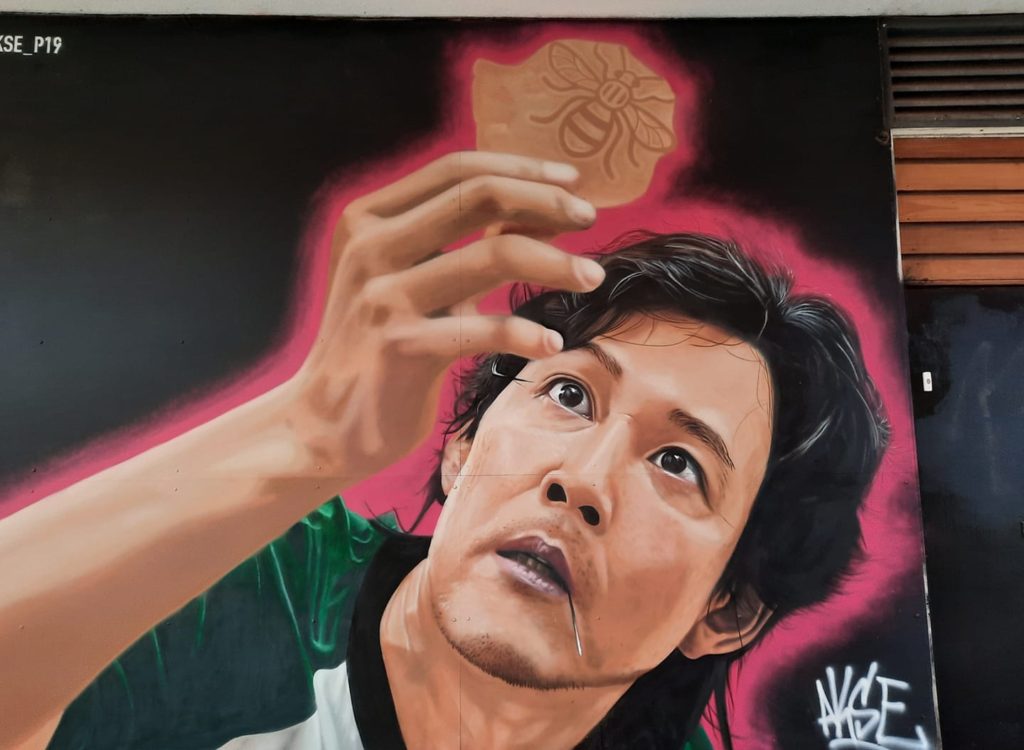 Officially Netflix’s biggest ever debut, Squid Game has now reached 111 million viewers in its first month. The dystopian series, created by Hwang Dong-hyuk, was written in 2009 but wasn’t picked up by Netflix until 2019. Whether this is a violent depiction of human greed or a story of bravery in a fight for survival is yet to be decided. Unfortunately, after series one, I would favour the former analogy.

Set in South Korea, the drama documents the selection of 456 players – all of whom are in extreme financial difficulty, being enticed to partake in a selection of ‘games’, with the prospect of winning a large sum of money. The show primarily follows the main character Seong-Gihun, (played by Lee Jung-Jae). The ‘players,’ including Seong-Gihun, are told that if they complete five games successfully, they will go home with a ₩45.6 prize. The players embark upon the games, all of which are a replication of well-known Korean games played in their childhood, all the while following instructions from an army of robot-like people wearing red suits and strange masks that fully conceal their identity. Despite the implied innocence of the games, there are shocks and deadly twists in store for the players and audience.

What seems more interesting than the storyline, however, is why a television series like this has seen such monumental success. The creator believes that the success may be due to the economic instability and inequality that exists throughout the world, particularly post-Covid. This would make sense, particularly as 500,000 more people in the UK alone are living in poverty, compared to before the pandemic, taking the figure to 15 million people. Poverty causes desperation, and desperation can lead to crime, making the show’s storyline more realistic than we would like to believe.

Dong-hyuk told The Hollywood Reporter: ‘Currently, I would say that more than 90 percent of people across the world will be able to somehow connect and empathise with the plight of the characters that are portrayed in the series.’

While this may be the case, the moral question facing the characters after the first game was that either all of the money could be split between the relatives of the deceased, or they could keep playing, win even more money and it be divided between the survivors. Despite the initial shock at the deaths of the other players, the survivors quickly determined they would continue for a chance to win the money for themselves.

This desensitisation to the hardship, and even deaths, of others is reminiscent of how quickly a society can be desensitised to shocking events. In March 2020, most people were surprised and frightened to hear of the rising daily death tolls in early press conferences due to Covid-19.  Still, society very quickly got to a place where thousands of deaths felt normal and protecting ourselves (and our loved ones) became our main priority.

Squid Game creator told The Korea Times: ‘After about 12 years [since the show was created-originally in the form of a film] the world has changed into a place where such peculiar, violent stories are actually welcomed.’

It seems surreal that the immersive and yet brutally violent series is the chosen viewing for 111 million people. We have chosen to escape our own lives by watching the shocking ‘elimination’ of the lives of others as our evening entertainment.

Yet the success is undeniable, something is drawing people in and keeping them watching. This isn’t the quality of the acting or the production; rather the fundamental concept of this show says something about how we live. Most of us live a life of some privilege, at the cost of the lives of those we will likely never see or meet. The evidence is there for us to see, but we often choose not to look. The cruel fact is that Western lives are often given more value than the lives of others and that death, poverty and even war is only truly shocking when it is within close proximity to us. And perhaps, on some level, the success of the show is owing to the fact that we all know this to be true. I’ll sign off with words taken from the show and let you decide their accuracy: “Life is like a game, there are many players. If you don’t play with them, they’ll play with you.”