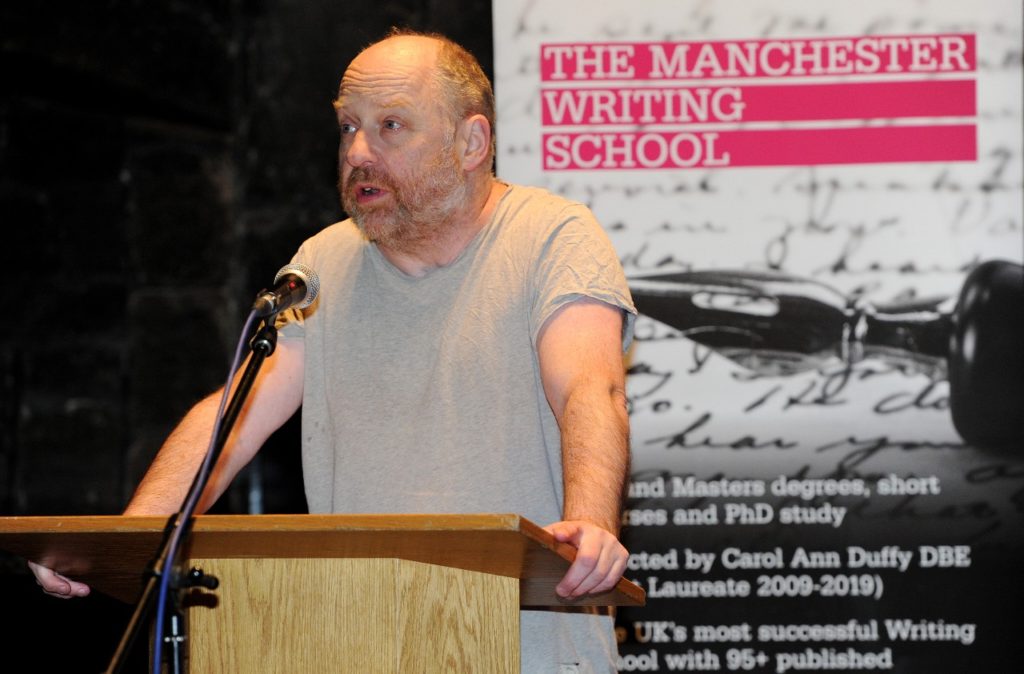 The Manchester Writing Competition is a celebration of new voices, and an opportunity for the Manchester literary community to shine a spotlight on new and emerging authors.

As the 2020 Manchester Writing Competition draws to a close, with finalists having already been chosen and eagerly anticipating the judges’ verdict on Friday, aAh! Magazine celebrates the authors shortlisted for the 2020 annual prize.

Campbell’s submitted story is an intriguing mystery which fully embodies its name, Needle in a Haystack. It’s not by chance that the story opens with the big picture, detailing the lives of those who inhabit and work at Osborne’s bookshop, a series of shipping containers set up near the M56, before zooming in to a single moment inside that same bookshop, the way a camera might focus in on that single needle in a haystack, before zooming back out, detailing the demise of the shop and the way the employees have adapted without it. Campbell’s prose is straightforward and no nonsense, yet his descriptions are vivid and detailed, clearly painting the setting of this northern England snippet of life.

When asked about the piece he submitted, Campbell said: “It’s the best short story I’ve written in seventeen years of trying.” Campbell said that it was “a thrill to get the email out of the blue” letting him know he had been shortlisted, and that even if he doesn’t win, being shortlisted will “improve both [his] profile and confidence.” When asked if he had any advice for aspiring authors he said, “Don’t be too keen to get published, especially with short stories. They can always be improved with time so be patient before sending them out to magazines or competitions.”

Neil Campbell is originally from Manchester, England. He has appeared three times in the annual anthology of Best British Short Stories and has published three novels, two collections of flash fiction, two collections of short stories, two poetry chapbooks, and a poetry collection. His third novel, Lanyards, is out now.

Donelon’s submitted story, little, offers a unique take on identity and falsehood through a mixture of stream of consciousness and chat messages. The main character’s internal narration as she muses on the unexpected chat from Marie, the fictitious Helen, and the subsequent cyber relationship they develop, raises more questions than it answers. Who is Hollie really? Who was Helen? And what’s the deal with the Year 8 boy? Although this short story is minimal in its description, choosing, instead, to emphasize the disintegration of language through its abstract narration, what description and imagery is included is incredibly compact, vivid, and insightful.

When speaking about the piece she submitted, Donelon said, “Over lockdown I had been drawn to plays like Winterlong by Andrew Sheridan, Pomona by Alistair McDowall, Arlington by Edna Walsh. Various parts of these scripts would resurface in my mind and I wondered how I could possibly respond to them, how could I possibly converse with those darker elements of human nature, secrecy, alienation, yearning, loneliness. I began toying with the initial idea of a young woman (who is currently experiencing extreme detachment) catfishing an older woman in the hope of escaping boredom, the monotony of her own life, or her own mind. It’s also clear that the piece is very obsessed with digital communication – something which we all have probably increased in the past year, so I felt it was timely to submit.”

Donelon said that being shortlisted was “a much-needed boost”. She said it helped her “to believe in the way I write and continue developing my process as a writer. It’s really hard to put into words how invaluable that is.”

Donelon is a Manchester-based writer. She trained as an actor at the Royal Central School of Speech and Drama after studying English Literature at University College London. She wrote for the stage with the Royal Exchange Young Company and is passionate about exploring tension surrounding cultural heritage and the female working-class identity.

Ian Dudley’s submitted short story, Exit Row, gives a wonderfully lyrical second person account of life on the move. Dudley draws readers’ attention to the small details of travel: the repetition, the insomnia, the weather, the people, in a way that makes you feel you are being pulled along, from one place to the next, with no reprieve. You are just as homesick, just as bored, just as anxious as you follow the text through airports, hotels, and taxis. It’s impossible not to feel helpless, and melancholy, as you consider where you come from, where you’re going, and who you want to be.

When asked about his submitted work, Dudley said, “The story is an intertwining of mental and planetary illness. I had been playing with this piece for years. The fact that I kept coming back to it tells you that I believed in it.” He added: “Writing is solitary and there’s not a lot of feedback and encouragement compared to other jobs. Unless you’re exceptionally lucky or brilliant, you need a lot of determination if you’re going to succeed; the setbacks and rejections come in battalions. Shortlisting is exactly the sort of tonic you need to get you through the difficult times.”

Ian Dudley studied Zoology at university. He worked in market research which allowed him to travel throughout Europe and the US. He is currently studying for a PhD in Creative Writing at the University of Birmingham and has had his short stories broadcasted on BBC Radio 4 and 7.

Edward Hogan’s submitted story, Brightside, follows Cyb as she navigates the loss of her husband and the all-consuming streetlamp that has been erected outside of her house. The light of the lamp is never ending, disrupting her sleep, her work, and her life. With her insomnia come hallucinations in the form of a mysterious shoebill stork, and as hard as Cyb tries, she cannot get to sleep. This story is a lovely ode to life, loss, and the things that comfort us. Hogan’s prose is elegant and clean, and easily pulls you into Cyb’s frustration and her loneliness.

Speaking to aAh! Magazine, Hogan said, “The story came to me in images: a streetlight, a giant stork, a bus, a face.” He added: “Writing involves a lot of rejection, so you prepare for that. I read the shortlisted stories from the competition, every year. It’s an amazing feeling to be on there. I feel very lucky, and very grateful.

“I’m starting to think that writing short stories is about really paying attention – to what you write, what you read, the stuff around you, and the stuff in your mind. It’s hard to develop that quality of attention, and it’s certainly something I need to work on.”

Edward Hogan is originally from Derby, but now lives in Brighton. He works for the Open University. He has two published novels including The Electric and Blackmoor. His short stories have been longlisted for the Sunday Times Audible Short Story Award and shortlisted for the V.S. Pritchett Prize.

Andrea Mason’s short story, Dead Man’s Stuff, Especially, Is No Good, makes use of struck out lines to tell two stories. One, the story of a woman settling, renovating, and moving forward as she sorts through the paraphernalia that belonged to her dead ex-boyfriend, and the other, the story of her relationship with that same ex-boyfriend. The memories that surface are as fractured and incoherent as real memories tend to be, and the crossed-out text lends an air of finality to those memories. Mason’s story draws particular attention to the items we place value on, the memories they hold, and the ways in which we compartmentalize the different aspects of our personality.

While discussing the form of her piece, Mason said, “I felt that in the form of this piece I had captured something; the idea that formatting and layout of text are as integral to meaning as the actual words.” Mason described being shortlisted for the Manchester Writing Competition as the “first high-profile recognition of [her] writing,” and that it will help “formally introduce [her] to the literary writing world”. Her advice to other aspiring authors is to “submit, submit, submit.” She added: “A writing friend – poet Fiona Curran – once said to me that ‘Your writing is no good in a drawer.’ I have never forgotten that advice.”

Andrea Mason is a London-based artist and writer. She graduated with an MA in Creative Writing from University of East Anglia and recently completed her PhD in Creative Writing from Goldsmiths. She was the winner of the 2020 Aleph Writing Prize. Her notable publications are included in The Babel Tower Noticeboard, Sublunary Editions, and Tar Press. Her debut novel, The Cremation Project, was shortlisted for the inaugural Fitzcarraldo Editions Novel Prize in 2018 and longlisted for the Dzanc Fiction Prize the same year. The novel will be published with Inside the Castle in 2021.

McBride’s short story, For the man who died in the wood, draws attention to moments of loss, both big and small. The story details the loss of life, animal, human and environmental, with an almost detached acknowledgment. Yet, the attention paid to the detail, description, and imagery contradicts the lack of names or obvious emotions, fully submersing readers into the melancholy, beautifully sentimental, tone of the piece.

When asked about her submitted story, McBride said: “I wrote ‘For the man who died in the wood’ straight after finishing leading a writing for wellbeing course for NHS staff, key workers and the shielding public. I hadn’t written anything myself during that time, it was a privileged experience reading about their experiences through their poetry and prose each week over those long strange months during the first lockdown. I think my story is a kaleidoscope of all those things I felt and witnessed, the losses we don’t see, the persistence of life and people, and of other species too.”

McBride said that when she discovered she had been shortlisted she was, “stunned and as we say up North made-up.” She added: “Being shortlisted boosted my confidence in my work. Being associated with such a prestigious prize, and on a shortlist alongside such truly brilliant writers means everything as a new writer whether I win or not.”

When asked what advice she has for new writers looking to submit their work, McBride said: “Just go for it, you have nothing to lose. Listen to the voices which come first in your writing, allow yourself to be taken over by them.”

Bernadette McBride is a Liverpool-based writer. She is a PhD candidate in Creative Writing at the University of Liverpool. She has published short fiction and a self-help book and has appeared in several anthologies and co-edited the anthology A Spray of Hope (University of Liverpool 2020). She won the Liverpool Guild 2019 award for ‘The Biggest Impact on the City of Liverpool’ for her creative writing workshops.

You can read all of the fiction shortlisted for the 2020 Manchester Writing Competition here.