You are here: Home / News / Libersea @ SOUP review – a meditative journey towards a brighter future 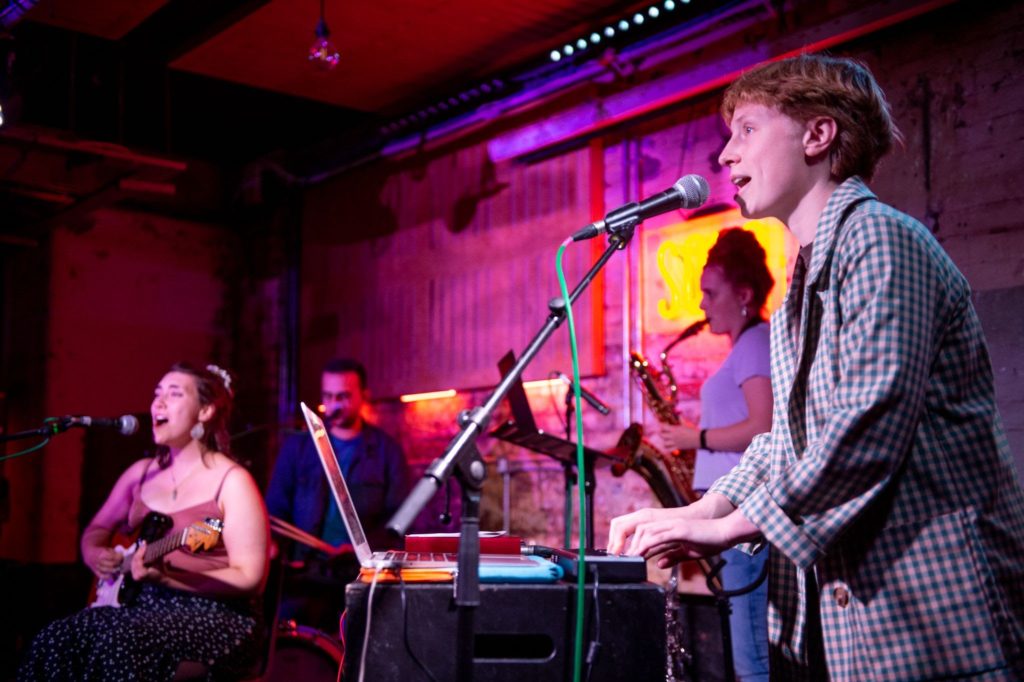 Libersea perform their debut EP, Can You Hear Me? – a meditative journey from the darkness of lockdown towards a brighter, more hopeful future which explores what it means to be connected in today’s world.

Support act Paige Kennedy threatened to steal the show early on with her incredible explosion of art rock and witty interludes. She set the bar high for Libersea but as soon as the baton was passed to them, the audience found themselves transported to another world of melancholic beauty.

Libersea is a songwriting duo comprised of Caitlin Laing-McEvoy and Ditte Elly Goard who were brought together by a project co-commissioned by Brighter Sound and Library Live as part of the ongoing gender equality initiative, Both Sides Now.

Can You Hear Me?, is an abstract theatre piece with little room for song and dance, but it’s packed full of emotive storytelling. Invited to read the accompanying graphic novel along to the music, the audience were entranced by their hypnotic abstract tale.

Discussing their musical influences, Libersea cite an array of genres such as progressive rock, classical, folk and electronic. When asked what plans they have for the future, the pair mentioned they would like to create a musical together but in the style they already have.

Writing their EP under lockdowns and zoom calls, Caitlin and Ditte shared the pros and cons of the use of technology during their songwriting process.

“We had to work out a new kind of language to be able to have a conversation that felt dynamic,” Ditte says. “And we got on really well which helped a lot. The intensity of zoom communication also means you end up talking about really deep stuff because you’re staring into each other’s eyes.”

It was evident from their presence on stage that they have become really good friends throughout this experience, even though they only met in person a week before the performance.

The pair also shared how much they have learned from each other throughout the collaboration. Caitlin says the project has allowed her to explore the world of music production, something that she has wanted to do for a while but which always felt uncomfortable for her. “It felt like a total guys club thing but working with Ditte has made me see that there are so many incredible female producers.”

In 2020 there was a 12.3% increase in female songwriters registering with PRS for Music, the official body which collects royalties for songwriters in the UK. But men still make up more than 80% of the total membership. Brighter Sound also lead by example in their efforts to redress the gender imbalance within the music industry, with women making up 70% of their current staff.

Caitlin acknowledges that although “there’s positive changes happening, we’ve still got a long way to go and things like Both Sides Now are really important.”

Libersea’s debut EP ‘Can You Hear Me?’ is available to stream and buy on Bandcamp.