You are here: Home / Art / News / Interview: Pippa Eason on her solo exhibition ‘Funny, Blurry and Everything Hazy’ at PINK Manchester 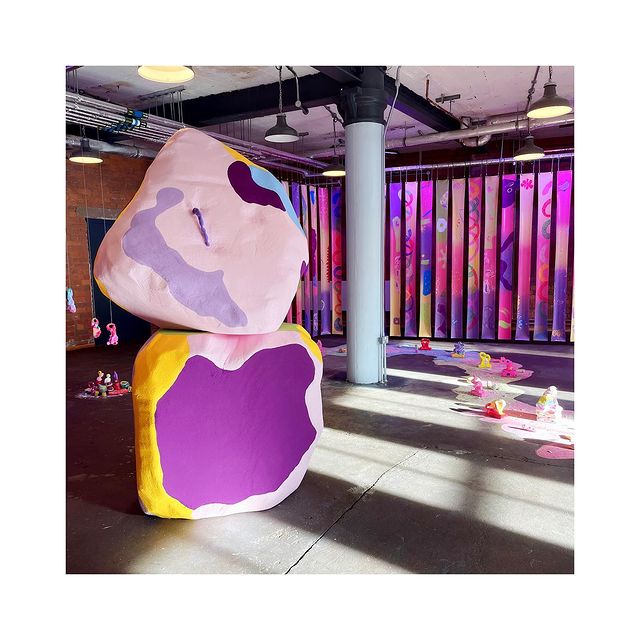 Highlighted under iridescent lighting, an amalgamation of bold, abstract, candy-scented sculptures creates a nostalgic sensory experience in Pippa Eason’s ‘Funny, Blurry and Everything Hazy’, a solo exhibition of her new works at PINK gallery.

Culminated as a two-year research project collaboration with David Devereux, Eason shares her initial practice idea, development processes, and overall influence behind the curation of her show in an email interview with aAh! Magazine.

Investigating the nature of early childhood memory and the impacts it has upon the shape and form of personality, the Mancunian-based artist recalls upon her first art installation.

Eason says, “One of my furthest memories of childhood play was at my Aunty Janet’s house, tying a string from the kitchen through to the living room. I hung my Auntie’s kitchen objects and ornaments from around the house. Looking back this was my first art installation and my fascination with objects surrounding me has continued throughout my life.”

Emphasizing the importance of remembering her childhood in hyper detail, she adds: “I seem to remember a lot, mostly micro-moments, things with no significance to others – but a lot to me.”

Eason strives to create a space within a space that not only mimics the shape of the sculptural forms but also the layout of the room surrounding them. Reflective of the fragility of childhood, Eason’s choice of delicate DIY materials adds a childlike aspect to her practice.

“I wanted to choose things that made me feel like I was truly playing, and to feel how the process had elements of joy,” she says

Intense colour visuals are the most captivating aspect of the show. Resembling her exposure to 90s cartoons, Eason’s hand-drawn pastel chalk floor installation contrasts to the candy-scented neon clay sculptures, replicating broken rock candy, she expresses how they are recreations of childhood object forms created from the viewpoint of her childhood memory.

“I had a very positive childhood and paid attention to objects and cartoons around me. I have always enjoyed excess and being immersed by lots of visual information, so naturally, that spilled into my art practice,” she says.

“I found a scent called ’Sweet Shop’, which is sprayed around the space every few days, to keep a subtle hint of it in the air. We had discussed smell a while ago, as smell memories can be the most powerful!”

Experimenting with the complexity of the space, Eason expresses further upon the concept of play and of how it is an organic aspect of her practice. She says, “I think we all have the inner child wanting to play and experiment, but at some stage, that seems to stop for some adults. We are encouraged to stop playing, rather than to continue after early years.”

Testing how far she can take interactive processes without them no longer being deemed serious mediums, foam wall, and floor installations reimagine an indoor climbing wall and frame which isn’t evident unless getting up close and feeling the material.

Eason makes it clear that she does not mind viewers touching her work and would rather have the audience build an interactive relationship with the pieces as it takes something personal away from the experience in the process.

‘The Funny, Blurry and Everything Hazy’ exhibition took place at PINK Manchester (86 Princess Street, Manchester, M1 6NG) which is a curatorial project focusing on research, practice, and collaborative exchange.