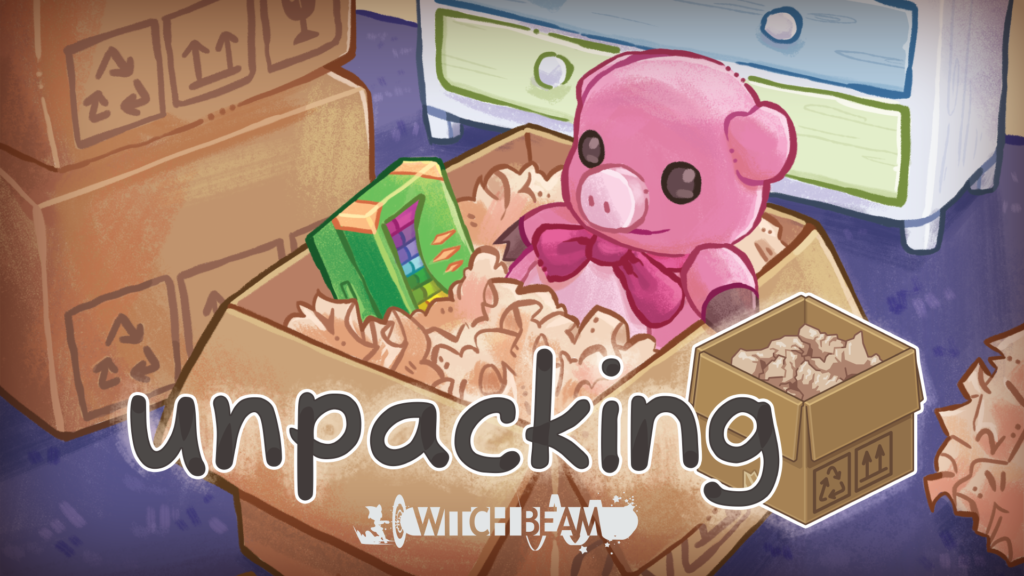 Who knew that such a simple concept of taking items out of cardboard boxes and placing them in a room, could make such a captivating game? Well, Australian developed Witch Beam did as they release their newest zen puzzle game, Unpacking. Available on PC, Switch and Xbox One, Unpacking should be in everyone’s library, especially students who need a break from the overwhelming world of work.

As soon as you open the game you are met with an instant sense of relaxation, as the sweet pixelated style begins this mediative quality that is sustained throughout the game. With “no timers, meters or score”, the player can just settle down and play at their own pace, becoming increasingly enthralled in the life of the unseen protagonist. The soothing atmosphere takes away all the stress from the audience, and as a result, I’ve been playing Unpacking late at night after the library to decompress, and I highly recommend everyone else to do the same.

The gameplay is quite streamlined, as all you have to do is, well, unpack. Throughout eight levels of varying sizes, locations, and difficulties, you decorate the character’s home and learn more about them in the process. The puzzle element stems from fitting the possessions to be both aesthetically pleasing and to make the most sense, but only a few items have a correct place.

The player is in control and can take any method they choose; whether that be the organised and careful play where even the books must be in descending order or the pure chaos of “if it can go there, it stays there”. You decide when you are ready to leave the level when everything has a home but with hidden stickers and achievements, there’s a replayability aspect as you want to find all the secrets in each room.

Unpacking is a masterclass in visual storytelling. Little moments and items create and add to this immersive narrative. You become attached to this character you never even meet, getting happy for their journey and sad for their tragedies. I smiled every time I saw a repeated object; a certain dress, a particular book, or the favourite stuffed animal and got proud whenever her collections grew, piecing together my own story about her life.

The way each level shows the progression through the years is told impeccably, with relevant trends and little easter egg, like how you upgrade from a GameCube to a Wii. Another noteworthy aspect is when the character owns and thrive more in their space, you can change and move more items about, fully decorating your house to make it truly yours. Unpacking shows that sometimes simplicity can be the most impactful.

On the Nintendo Switch, the controls can be a bit fiddly, and I wish there was more dynamic gameplay as the levels progress but it’s such a satisfying moment when the item clicks perfectly in place.

Witch Beam has been recognized and awarded for its accessibility by including numerous features and opinions to please any audience. It can be played one-handed on the PC; icons can be resized, and the puzzle element can be completely removed to make the gameplay easier.

Overall, Unpacking is beautiful and serene. It is exactly what I need after a long stressful day of university or work, allowing myself to relax and get transported for a moment, where all I do is unpack.

Unpacking is available on PC, Nintendo Switch and Xbox One for £15.49. You can follow any updates on Unpacking on Twitter @unpackingalife or follow @witchbeamgames for any future games.