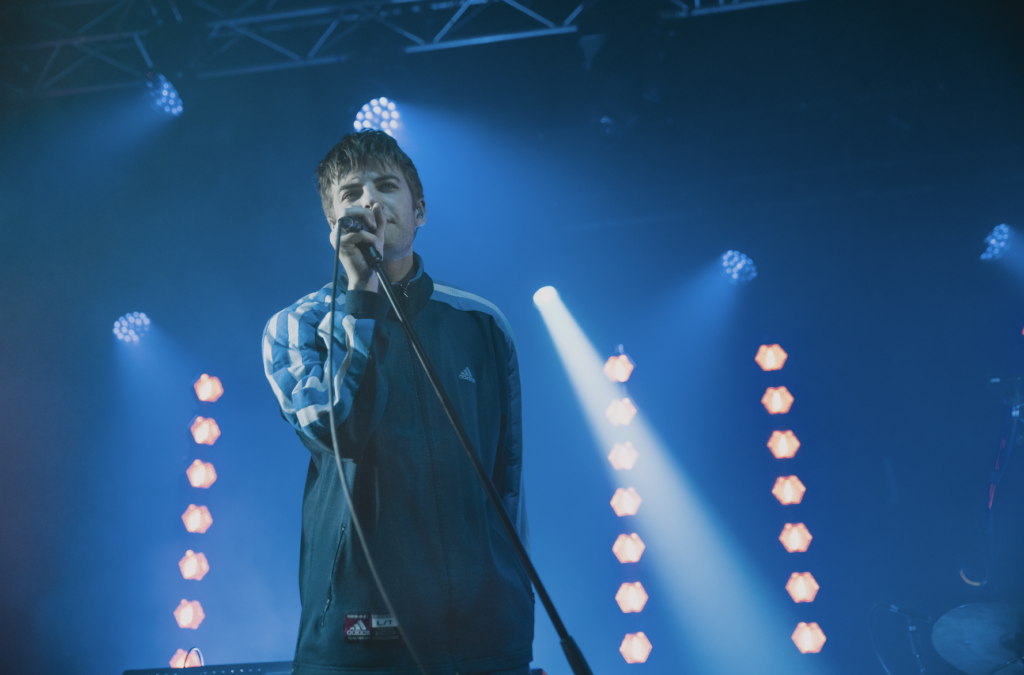 Fontaine’s D.C. make a glorious return to Manchester with three consecutive sold-out headline shows at Manchester Academy’s 2,300 cap venue. Finally getting the opportunity to tour 2020 sophomore album A Hero’s Death, it was a chance to compare how the album holds up live in comparison with Mercury-Award nominated debut Dogrel, which saw the band rise to mass critical-acclaim.

The atmosphere in the venue was electric as a diverse range of fans awaited the arrival of Dublin-based Fontaine’s on stage. Sporting a casual Adidas tracksuit which is very fitting for a Manchester show, lead-singer Grian Chatten strode onto stage. Opening with the title track ‘A Hero’s Death’, from their latest album, the crowd had barely any time to react before chaos ensued among them. The fans had no time to recover before diving straight into ‘A Lucid Dream’.

Following on from this came single ‘Sha Sha Sha’, with strikingly witty lyrics and a heartbeat like track, the fans excitedly sung the lyrics back to the band as the crowd swayed from side to side as they danced.

The set-list was a near-perfect split of tracks old and new, serving up all the fan-favourites such as ‘Televised Mind’, ‘Big’ and ‘Too Real’ which saw giant inflatable eyeballs thrown from the front and balcony and into the crowd, which was a surprising touch for a band that kept their stage setup to be simple, however, the crowd seemed to lap it up as they hit the inflatables into the air.

As Chatten performed, he gave off a similar vibe to old videos of the way Joy Division’s Ian Curtis would perform, however, much toned down, Chatten paced the stage and circled the microphone.

Of what seemed like a surprising highlight of the set for many, ‘Hurricane Laughter’ saw the crowd causing a raucous scene as the strobe lights of the academy danced around the room, creating a swirling motion-like effect. It almost felt like how you would imagine standing in a tornado would feel as Chatten’s repetitive vocals echoed around the room giving off hypnotic-like trance vibes.

Finishing the main set with original fan-favourite ‘Boys in the Better Land’, the crowd’s very own performance was energetic and chaotic as they gave it their all for what they thought could be their last chance.

After briefly exiting the stage, Fontaine’s D.C. came back on to perform slow but nevertheless punchy, ‘Dublin City Sky’. The set finished with ‘Liberty Belle’, which transformed Manchester Academy into a joyous reunion of concert-goers celebrating the return of live music.

Fontaine’s D.C. are truly unique and reflected their distinctive individuality in their live performance. A delight to witness live, no doubt everyone in attendance will be listening to their discography for the next few weeks in an attempt to relive the night.