You are here: Home / Culture / News / 808 State at O2 Ritz Review: an electronic spectacle that journeyed through the history of Manchester’s club scene 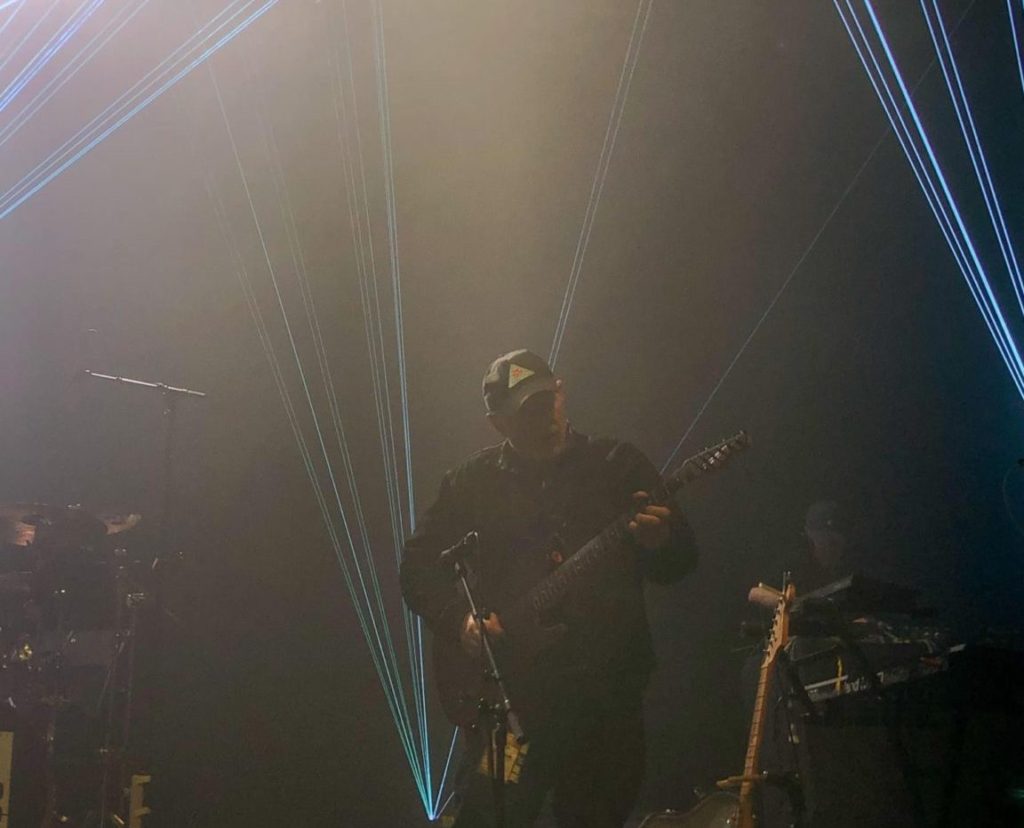 Mancunian legends 808 State returned to their home city this weekend at the O2 Ritz. The Acid house veterans served a joyous set that blended both past and present. They proved not only what seamless artists they continue to be but how pivotal their presence is now just as it was in the 80s. Joining 808 State, was Manchester-based DJ and maverick producer Afrodeutsche who opened the show with a compelling mix of techno and house.

The Acid House originals took the crowd on an electronic spectacle that journeyed through the history of Manchester’s club scene. The crowd was unsurprisingly awash with the slightly older faces, looking to relive the ‘good ol’ days’ of the Hacienda. Perfectly located, the gig was practically right around the corner from where the Hacienda used to be, so it must have felt all too familiar for the original fans. But age did not bring barriers between old and young in the crowd. It was an experience of generations welding together and I have to admit, the classic crowd really did show us how it was done.

808’s set was nothing short of spectacular and exceeded all expectations. Far more than knob-twiddling and drum machines, Graham Massey showcased his array of music talents synthesiser, guitar and saxophone. The live rendition of the bands notorious hit, Pacific State, sent echoes of tropical bird calls and some hypnotic sax solos by Massey. The moment was enchanting and it was hard to not focus on the musician until a man told me to look behind and above me. There displayed green and blue laser beams that boxed the crowd under a ceiling of crisscross patterns. It was like Massey himself was conjuring these trippy visuals through his sax playing and confining us in his creation.

The setlist accustomed the crowd perfectly playing the classic club bangers Cubik and In Yer Face, taking us through a journey of 808 State’s catalogue that pioneered the electronic dance scene from the late 80s. Their status as legends is no hyperbole due to their force in eclipsing London as the rave capital and earning this great city’s second title, “Madchester.” There were even nods deep into the band’s past to its Hip Hop beginnings, The Hit Squad, a rap collective that they started in the Eastern Bloc basement before the band catapulted into the new age of techno/house.

The show was also far more than just a blast from the past either. There was plenty of recent material too including from their new album, Transmission Suite, which was released back in 2019. The newer stuff still adheres to the 80s squelchy analogue sounds and innovative beats, but still fresh propulsive beats and wavering bass more redolent to Manchester’s current hip hop scene.

It was a phenomenal atmosphere in O2 Ritz from start to finish. 808 State totally bathed the room in laser beams and the electronic lineage that was such a defining part of Manchester’s culture. The Hacienda and the peak of the acid scene may be no more in the physical world but was brought to life in nostalgic form on Saturday night. Not only did the group transport us to the past but collided with the past, present and future of electronic dance music in one special night of ultimate euphoria.