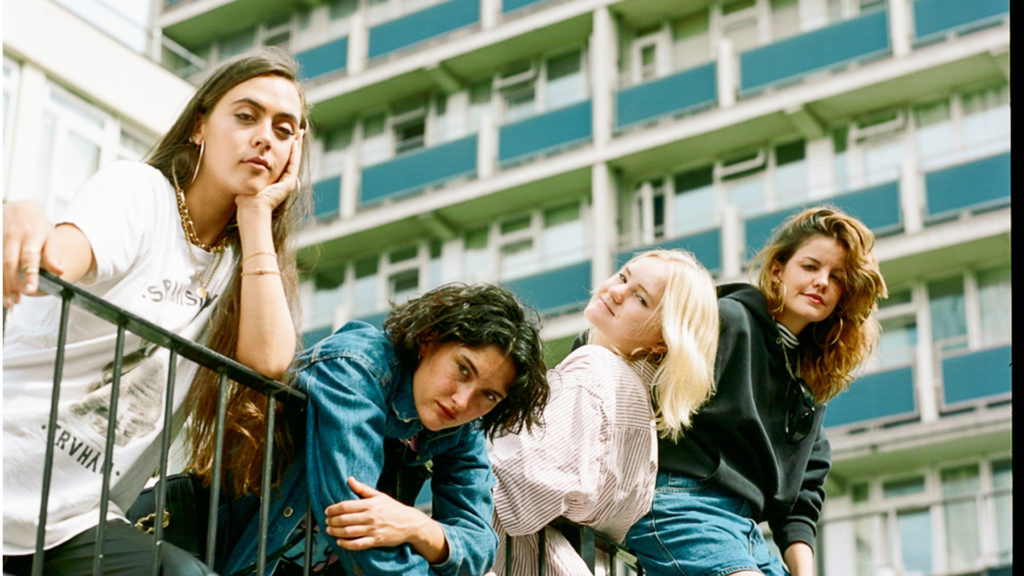 An announcement for all amigas y amigos, Spanish indie band Hinds’ long-awaited third album, The Prettiest Curse, has been released via Lucky Number. Produced by Jennifer Decilveo, who has also worked with the likes of Anne Marie and Melanie Martinez, this third album follows garage-rock release Leave Me Alone (2016) and indie-rock powered Don’t Run (2018).

The release date for The Prettiest Curse was formerly April 3rd, however, it was postponed until June 5th – understandably so, as the band were focusing on their loved ones during this time.

Earlier this week, Hinds announced on Instagram that they felt it “wrong to be releasing an album and promoting it during a time where the world seems to finally be listening to the major problem of racism”. Despite it not being possible to postpone the album, they have temporarily cancelled other aspects promoting its release.

The Prettiest Curse is their most polished offering to date. Hinds have risen against criticism while wearing their hearts on their sleeves. Combining soaring harmonies and fiery attitude, the spirited quartet discusses themes of heartbreak, isolation and betrayal. Much like their personality, their ambition holds no bounds. The all-female band consists of Carlotta Cosials, Ana Perrote, Ade Martin and Amber Grimbergen.

Opening track ‘Good Bad Times’ instantly draws you in with its catchy bassline, which is reminiscent of The Strokes. It wouldn’t be surprising if they’ve taken inspiration from the band, after being long time fans of theirs and have previously supported them on tour. Dripping with keyboards and synths it almost makes light of the subject of the song: an unfortunate relationship scenario where one believes everything is great, while the view of the other is the polar opposite.

This was the first album they have written anywhere outside their hometown of Madrid. The band made themselves at home in L.A and wrote the album whilst staying in a blue bungalow Airbnb at Silverlake. Another first for the band was predominantly singing in their mother tongue. Lyrically, their tracks are written in what they’ve coined as “Spanglish”, and by doing so have allowed Hinds to showcase another side of their identity. This is best heard in Spanish-romance ballad ‘Come Back And Love Me <3’, which features some authentic Spanish guitar.

Stand-out track, ‘Boy’, shows that the band haven’t forgotten their garage-pop beginnings, while still demonstrating their venture in embracing a more ‘poppy’ sound. Within a similar vein, the powerful and confrontational track ‘Burn’, wholeheartedly voices the issues with the world, such as “I wanna tell my girls how we are fighting in this man’s world”. Angsty-pop track ‘Take Me Back’ perfectly expresses the tsunami of emotions caused by a breakup. Furthermore, track ‘The Play’ reflects the pitfalls of fame and how they’ve questioned their identity along the way. The growing pains of life are perfectly reflected throughout this album.

The spunky nature of the Madrid-based quartet is also reflected in the track ‘Just Like Kids (Miau)’. It sees the band reacting to the sexist comments they’ve experienced over the years with their usual tongue-in-cheek lyrics. Their snarling vocals address absurd comments they’ve received in the past and is a reflection of their wit. Taking inspiration from the nineties, the music video for ‘Just Like Kids (Miau)’ directed by Keane Shaw, authentically reflects the energetic personalities of the group. They take every remark on the chin, emerging stronger from every situation. Ultimately, it is a reflection of the realities faced by being in a girl band.

‘Waiting For You’ is a quintessential approach to reflecting on a relationship gone sour. With lyrics such as “I hope you like it better by yourself, ’cause, You’re always chasing, chasing something else”. Hinds’ lyrical prowess, as usual, is second to none. By contrast, last track ‘This Moment Forever’ is a slow and peaceful number, which encapsulates the blissful desire of wanting a moment to last for an eternity. After listening to this album, you won’t want it to stop either.

Hinds may have donned superhero costumes for their ‘Good Bad Times’ music video, however, they have voiced their concerns about sexism in the industry since the beginning. Their music may be considered to be more ‘pop’ than when they first burst onto the scene, however, their thought-provoking lyrics and sound are as boundary-pushing as ever. Flying the flag for women in music, their authenticity makes them invaluable an role model for others. A band truly proving that not all heroes wear capes.

Hinds’ latest album The Prettiest Curse is available on all major streaming services. Their upcoming UK tour has also been postponed until September 2020 and all tickets remain valid.

The UK Tour dates are as follows:

Be sure to keep up with Hinds: