You are here: Home / Culture / News / Politics / Thousands turn out in Manchester for weekend of Black Lives Matter protests 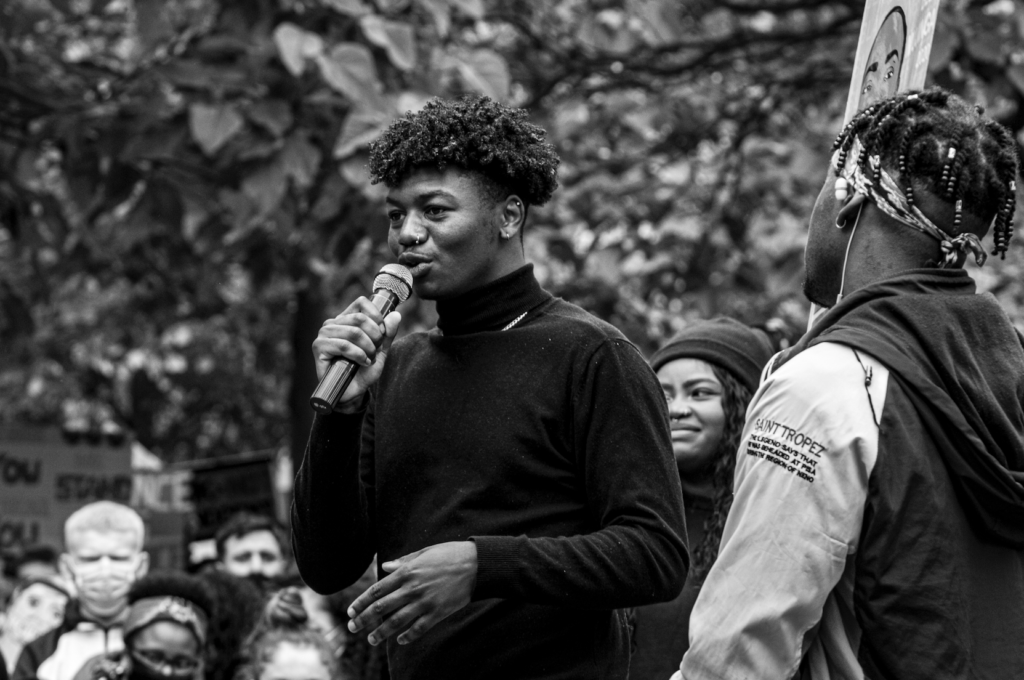 Manchester saw thousands of protesters take to the streets over the weekend, in three protests held in solidarity of the Black Lives Matter movement.

The anti-racism protests were held in support of US demonstrations following the murder of George Floyd, an 46-year-old unarmed black man who was killed by a Minnesota police officer, as well as pointing out the injustices that we face here in the UK and across the rest of the world.

Manchester’s weekend of protesting began on Friday with a demonstration organised by activist group World Wide Kneel. The group organised demonstrations in Manchester as well as London and Bristol and broadcasted the events via the online video platform Zoom.

Over 600 attendees took the knee in solidarity with the Black Lives Matter movement at St Peter’s Square, mourning the loss of black lives across the world.

On Saturday, the city saw the largest turnout for a protest of this kind with an estimated 15,000 attendees. Beginning at 1pm, in Piccadilly Gardens, the protest organisers took to the stand and spoke about their own personal experiences of racism as well as reaffirming the reason behind the gathering: not only to show solidarity with the US but to also point out that the UK isn’t innocent when it comes to racism and injustices.

Protesters socially distanced where possible and free masks and hand sanitiser were handed out to the public. Attendees to this demonstration were advised to wear masks or face coverings, socially distance and to know their rights if questioned by police.

Chants of “No justice, no peace”, “I can’t breathe” and “The UK is not innocent”, echoed throughout the crowd as the group moved forward with a peaceful march through the city centre.

Market Street filled with cries for justice as a sea of masked faces marched along. The city’s traffic stood still as the sheer amount of people passing through couldn’t be broken.

Once on Deansgate, protesters were able to fill the roads that had been closed and continue marching through to the Central Library and loop back to Piccadilly Gardens, where speeches continued.

Crowds were still seen in Piccadilly Gardens at 7pm, six hours after the initial protest began, with people continuing to share their experiences and collecting litter that had been left behind.

Sunday’s protest began at St Peter’s Square with an itinerary instructing people to ‘pull up’ at 2pm. After the opening speeches, protesters kneeled for eight minutes for a moment of mourning and reflection then proceeded with a march through Market Street and Deansgate and then back to St Peter’s Square.

Despite the sombre weather, the final day of the demonstration saw a turn out of approximately 4,000 people, who were again reminded that if they are displaying any symptoms of Covid-19, are high risk or live with someone high risk, they should stay home.

It was also stressed in the opening speeches that protesters must remember to keep distance where possible and to wear masks and gloves at all times.

It was pointed out throughout the day that this is a peaceful protest and that any violence wouldn’t be condoned.

On Sunday, morning the official Twitter account for Manchester Black Lives Matter Movement #MCRBLM tweeted: ‘Anyone causing problems, I suggest you don’t come’. The group also pointed out that violence will not be tolerated. Similarly to the previous days, Sunday’s protest was peaceful, while still stressing the point of the display.

He told the Manchester Evening News: “Racism is built into the DNA of the UK and personally we’ve all had enough.

“I organised this protest because I’m sick of being seen as a lower citizen, that the colour of my skin and the texture of my hair imply that I’m a thug and uneducated. I want every person that’s enriched by black culture to pull up, your silence is complicit with what black people are having to face.”

He added: “I have two nephews who are living in Bay City, Texas. I want them to grow up in a world without fear, where they can blossom into the amazing people I know they’ll grow up to be.”

This weekend of protesting has showed that, although difficult at times to distance, attendees made an effort to stick to these guidelines when and where possible.

Throughout the weekend the hashtag #MCRBLM was flooded, on both Twitter and Instagram, with images and tweets from protesters praising the organisation of the march and attention to social distancing rules.

Signs read ‘0161 SAYS RACISM CAN DO ONE’, ‘RASICM IS A PANDEMIC’ and ‘RACISM IS A SYSTEM NOT AN EVENT’, as well as many more bold messages calling for action and change.

Sir Richard Leese, Leader of Manchester City Council, released a statement on Saturday thanking protesters for their “exemplary behaviour” during the protests.

He went on to stress the importance of social distancing as we are still facing Covid-19 and stated “the right to protest should always be protected, as should our people’s health”.

Leese concluded his statement, adding: “Use your voice, but do so safely.”