You are here: Home / Culture / Interview / Music / SVTIL on Their Latest Music, Rejecting “Token Female Band” Line Ups and Why We Should Call for Venues to Fill More Slots With Women 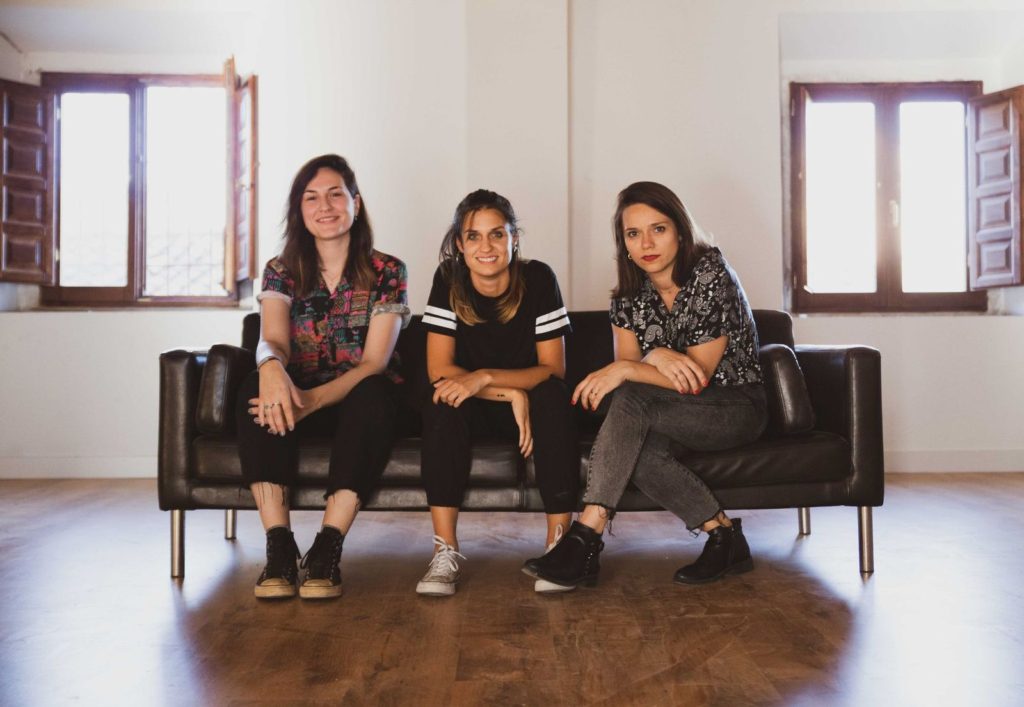 Spanish indie-rock band SVTIL may only be at the beginning of their music career, however, they have consistently proved that they have the capacity and ambition to make it in the industry, with their passion and drive to go against the grain. After successfully touring all over Europe, they have impressed audiences at shows by creating music that speaks from the soul.

After playing a show in London last year with The Elephant Trees, and following in the footsteps of other indie Spanish bands who broke into the British scene, the group have continued to consolidate their successes. The band consists of Paula (vocals, guitar), Nerea (bass) and Cris (drums).

Recently, they have brought their talents to all major streaming services, in the form of their debut single ‘Raised By The Moon’, via the new all-female run label, Incantation Records – a label focused on showcasing new artists and keeping the grassroots scene thriving. It is a grunge-pop track tied together with smooth guitar and rolling drums. The enchanting vocals which alternate between Spanish and English. The track itself is centred around personal dreams and desires, with the moon acting as a central metaphor for dreams. The band have stated themselves that “Night time is where a huge part of our lyrics are written if not all of them, so is a safe space where only the writer, the moon and their feelings are present with no one there to judge.” It’s this willingness to embrace their originality, honesty and stand up for what they believe in, which sets them apart from other bands.

aAh! Magazine catches up with SVTIL over email, to discuss their latest track ‘Raised By The Moon’, achieving equality in the industry, and working with the new label, Incantation Records.

How did you choose the name SVTIL?

“Sutil means ‘subtle’ in Spanish. We are not that at all, you can tell pretty quickly when you get to know us. We always use this catchphrase ironically ‘sutil, muy sutil’, that means ‘very subtle’.”

“So one day we thought that name would be cool for the band and it stuck with us. We put the “V” instead of the original “U” to give it a cool touch, be easier to recognise and to be found so much faster on the internet.”

How has your sound evolved over time?

“When we started playing we stretch out the songs a lot, we didn’t know when to change it up or were just jamming and wanted to see where we were going.”

“Now with years of practice and Cris in the picture, she’s helped us to redo song structures and know when we are doing overdoing bits in a song. It’s become intuitive for us to know exactly how to create the best way we think a SVTIL song can be.”

“We also challenge ourselves more to create different sounds and not fall in the same routine of creating songs, that has helped us a lot to evolve our sound.”

Why did you choose ‘Raised By The Moon’ to be your first release?

“‘Raised By The Moon’ was written four years ago, it’s a really special song for the band.”

“When we decided we were gonna release ‘Raised By The Moon’ first, it felt like the perfect song to do as it embodies our sound better than we ever imagined. It was the first song we wrote that felt like us, so being our first release feels like an out of body experience.”

“We hope people embrace this little piece of us with all the love we’ve put in it and feel that we only want to give the best of us and make people feel joy and give them a sense of togetherness.”

What was the writing process like behind your first track?

“We started playing as a way to have fun not knowing music theory and never playing covers. We were just playing around and in the midst of all that we created ‘Raised By The Moon’ a song that finally embodied our sound and pave the path for what the sound of SVTIL would become.”

Why did you choose to sing in English, as well as your native Spanish?

“It was never a conscious decision for us. The three of us consume a lot of music, movies and books in English so writing lyrics and singing was natural for us. We have one song in Spanish and it was kind of a challenge for us to see what would happen if we sing in our native tongue. Maybe if we don’t rush it, it will happen again organically.”

“When it’s time to create new songs we always go with the flow to see where the song takes us but we will be always drawn to write in English because of our influences and because hopefully, we can reach more people who identify with what we sing.”

What initially drew you to the British music scene?

“The music scene for our band is pretty challenging, the majority of indie music consumed here is in Spanish, not English. Our sound doesn’t fit with the wave of indie that is made here and with the big indie bands in Spain that go for another type of indie music.”

“Since the beginning, we always thought our music would fit better in the British music scene. Our influences, the larger part of the music we listen to are from there, and we’ve always been drawn to the UK music scene.”

“Meaning, those are big reasons for wanting to release music in the UK. We had the pleasure of playing a gig in London last year with The Elephant Trees, and we had proof that people welcome our sound and are open to hearing what we have to say. We have this opportunity thanks to other indie Spanish bands that have opened the door in the UK for bands like us.”

How did your working relationship with Manchester-based label, ‘Incantation Records’ happen?

“We wanted to play shows in the UK and did research on Instagram looking for managers, labels and promoters that supported female bands and found Natasha. Luckily when we talked we clicked instantly and we arranged two shows switching cities, the best follow we’ve done on Instagram.”

“Since day one Natasha and Martha saw our potential as a band and we are really grateful for that. Now with their new label, we can’t wait for what’s to come, they are really talented and hard-working people. We know they can achieve everything they put their mind on and we are so happy to be beside them in this project.”

You’ve made a significant impression on crowds in Barcelona, Valencia, Tarragona and London, how have you found expanding your reach outside of your hometown?

“We’ve found it hard, not gonna lie. In socials it’s easy to reach people outside our hometown that like our music and follow us but that people can come to your hometown shows and we’ve always struggled with that. So when we met Natasha and Martha of Incantation Records, they helped us reach more people and more importantly, know how to put out music, get interviews and get a base of people who will listen to our songs.”

“They’ve been the bridge to our music and the UK and we are grateful for everything these women have done for our band.”

How do you think others can help to achieve equality in the music industry?

“We think the best other people can do is give women opportunities. Not only to females in bands but also jobs at venues, studios, etc.”

“We want venues to not only have a token female band to fill the spot but have more slots with women in it, so people start seeing it as the new normal. And, so we can’t stop getting questions about “how did we get that show or who do we know” as being the only option as to why we play shows, not because we are a talented band or people like our music.”

When can we expect more releases from you?

“We have an EP coming up named ‘Moonstock’ that will be out October 30th, so we are really excited about that. It feels really good as an artist that people finally will listen to these songs after all the work and effort we’ve put, we are really proud of our EP and how it turned out.”

“We consider these five songs an introduction of SVTIL and all the branches we can reach with our sound but leaving the feeling that each and every one of them is part of our unique sound.”

“With an EP out we want to keep making music and record another one with songs we’ve created, now that we can’t play shows, hopefully, make a record soon.”

“We really miss playing shows and can’t wait to showcase our new music and tour in the UK as soon as possible.”

SVTIL’s latest track ‘Raised By The Moon’ is available to listen to on all streaming services. Their forthcoming EP Moonstock will be released on the 30th of October.