You are here: Home / Culture / Music / Spotlight On: Bristol-Based Indie-Rock Band We Are Parkas 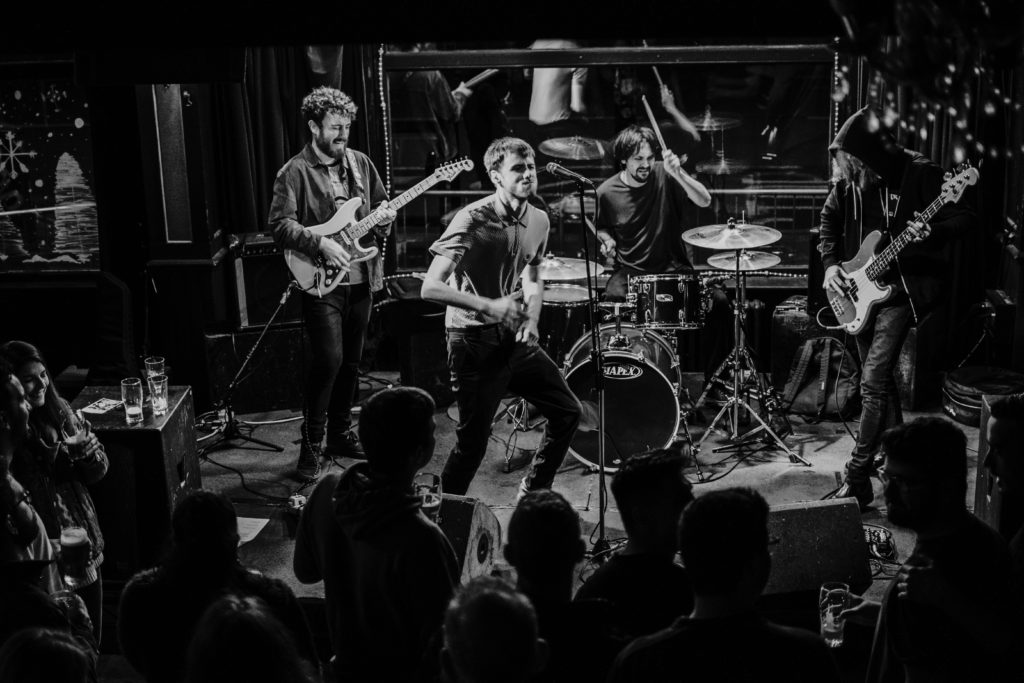 Parka jackets have long become synonymous with cutting-edge indie rock bands such as Oasis, after being a continuous favourite of Liam Gallagher. This traditionally khaki form of outerwear is also a widely recognised symbol of mod culture. With this in mind, it seems obvious why a rising band would choose to pay homage to the humble parka, by incorporating it into their name. Rising rock band We Are Parkas consists of vocalist Matt Banks, bassist George Hopkins, drummer Joe Heffell and guitarist Chris Nesbitt.

The signature sound of the Bristol-based group could be described as gritty rock, however, their current repertoire boasts an eclectic mix of indie and even punk-infused rock tracks. Since forming in 2017, they have released several EPs and singles, and have focused on touring as much as possible.

We Are Parkas have been rewarded for their efforts with thousands of streams on Spotify, an impressive feat for the fledgling band. They’ve also received acclaim from various movers-and-shakers in the industry, including This Feeling and Adam Crowther of BBC Radio Bristol, who is full of praise for the band. Crowther stated that We Are Parkas have “Incredible lyrics. [They’re] ridiculously talented. A brilliant, brilliant British indie rock band.” They have also toured with growing artists such as Larkins, Himalayas and The Snuts. By getting their music heard at festival slots and both support and headlining gigs, they’re quickly building a name for themselves.

Their previous releases showcase a range of songs which few artists could create. ‘Thirtysomethings’ is a deceptively upbeat indie track, with moving accompanying lyrics such as “I see the tears roll down your face again/ I never meant to make you cry”, topped off with a guitar-laden chorus. It’s another stellar example of their ability to transfer real-life experiences to the masses through their songwriting. ‘Catch Me Out’ is a lesson in how to execute the perfect riff. It acts as a revisitation to the rock of days gone by while adding their own spin to the track. Their combination of rough carrying vocals with earth-shattering riffs is a hallmark of the band.

Their recent release ‘Friday Night’ marks their first offering of 2020, since their last track ‘Medication’ last year. Their newest number has an instantly explosive feel, allowing Banks’ snarling vocals to shine. It’s almost a modern punk-rock re-imagining of The Clash’s legacy. With the proud DIY work ethic and rough-and-ready approach, Joe Strummer would almost certainly be a fan. As it builds to a crescendo at the end, it’s obvious that this band isn’t here to take any prisoners. The band describe the live version as “almost violent'” stating that, “It’s just an all-out, no holds barred assault on your eardrums. Dirty, disillusioned, maliciously unapologetic rock and roll to be enjoyed only at maximum volume.” It is a song which lends itself well to being blasted loud. From the get-go it’s a welcome assault on the ears. The pulsating drumbeat will immediately draw you into this number taking you out on the town.

Long time fans of the band will know that ‘Friday Night’ has been a crowd-pleaser since 2015, and was actually written before the band even formed. They’ve bided their time as they intended to “give it the best platform possible, as well as the best possible treatment in the studio”. The band further added: “Luckily the guys at Sugar House Studios didn’t let us down and took the song to a whole new level that we couldn’t have even imagined before.”

Don’t just take the band’s word for it, be sure to listen to it yourself. They may not have been able to tour ‘Friday Night’ as soon as they would’ve liked- however, once the current situation has passed you can guarantee they’ll be getting back out there to proudly share their latest track.

Keep up with We Are Parkas on: