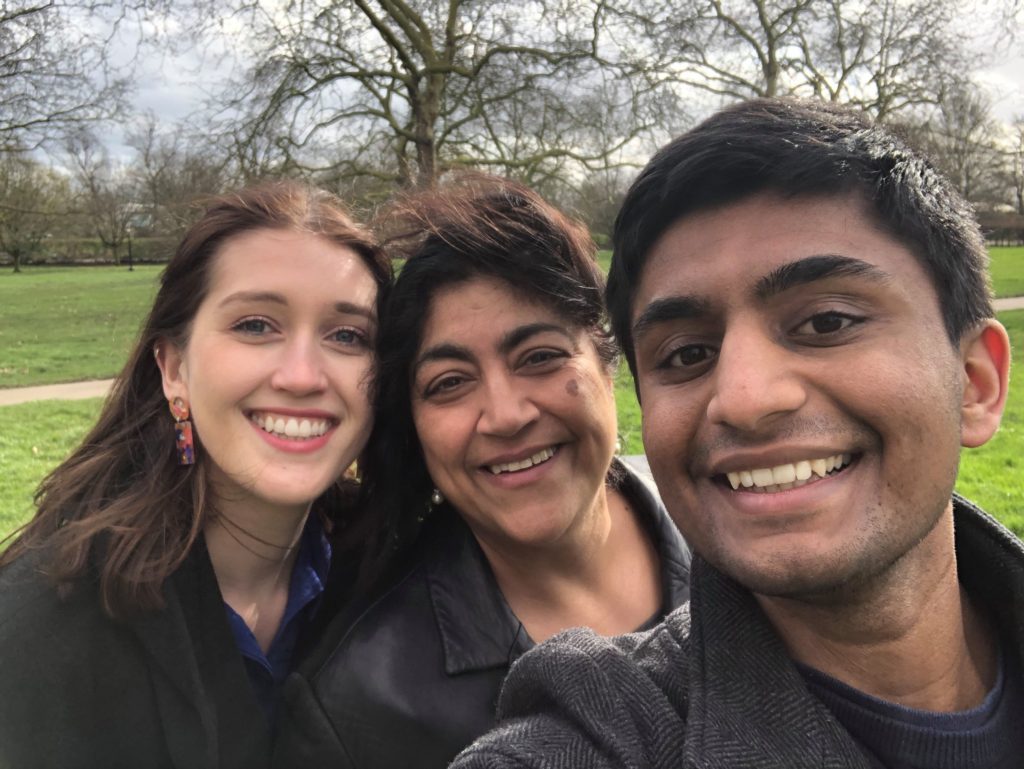 aAh! Magazine’s Pruthvi Khilosia and Leonie Backhaus give a behind the scenes look at the making of student documentary South Asians: Making it in The Media.

Manchester Metropolitan University students have created a short documentary featuring British film icon Gurinder Chadha, best known for her inspirational works Bend It Like Beckham and Blinded By The Light.

Initially intended for his final year submission, Gurinder’s response to Pruthvi’s pitch took his documentary to another level.

“It always starts with an idea, and as I narrowed it down to something personal I saw that it had more potential with a broader scope,” says Pruthvi.

The short documentary features the journey of recent multimedia journalism graduate and podcast journalist Siddra Asghar, SportBible journalist Adnan Riaz, and film director Gurinder Chadha, all South Asians who have similar journeys in making it in the industry.

Pruthvi’s work focuses on the struggle around pursuing careers in the creative field within the South Asian community because of issues surrounding support, cultural taboos and economic pressures.

“There isn’t much need to support that, the evidence is in my documentary,” Pruthvi adds.

Having an icon such as Gurinder on a student project seemed “wild considering time and pressure”, but the impossible became possible with a trait every passionate journalist has – ambition.

“Gurinder is proof that people like me can do it, so I had to contact her about my short feature,” says Pruthvi.

“Her films are well-received and recognised, especially Angus, Thongs and Perfect Snogging. That in itself just shows our ideas and stories have potential if we are given a platform.”

Pruthvi met Gurinder briefly at the Manchester screening of her film Blinded by the Light back in 2019. They talked about cultural input in her movies as well as both of their backgrounds.

“My brief encounter with her really helped me to get her on board with my documentary. Gurinder replied within a day and said that she read the email personally, which really added to the surprise.”

Financing the production would be a struggle, as the main interview needed to take place in central London, but Pruthvi says he is really grateful for the opportunity and the help he received from the university which made his dream possible.

“Natalie Carragher, who oversees aAh! Magazine, really made my plans clearer from helping me craft professional pitches to supporting me to arrange a crowdfunder for travel costs,” says Pruthvi.

“A lot of people in Manchester and friends I made when studying abroad in the USA helped out instantly. The fact that they believed in me and appreciated my work really put a smile on my face.

“The fundraising efforts and funding I received from the Faculty of Arts and Humanities were a huge help. It was also fun looking for cheap restaurants and hotels with Leonie – the adventure of pre-production!”

Getting the desired look was all based on trust and with a helping hand round the corner, Pruthvi was able to choose the perfect partner to work behind the camera.

“Leonie had to be my first choice because she had and always has a can-do attitude. I really needed a person to give me the confidence and reassurance during the whole process,” Pruthvi said.

“We made a good time of it in London and she really helped me get the look I wanted. Her ideas and input were priceless especially at the Q&A and screening of Gurinder’s Bhaji On The Beach.”

Leonie is an exchange student from Germany doing a masters in journalism. A quick learner, with an eye for detail, Leonie will now be able to use the feature in her portfolio as well as graduate with international experience and a celebrity in her contacts.

“Not only was this trip a great way to practice my video filming skills more, but also to get to know Gurinder Chadha in person, was amazing,” says Leonie.

“When she suddenly stood in front of us, I couldn’t believe it was her. She was so down to earth and super friendly. She even gave us tips on how to set up the camera in a better way, which I thought was very nice of her.”

Students and major icons collaborating for projects is certainly an achievement and with a little bit of belief and courage, Pruthvi proved anything is possible.

“Even though she is a well-known film director, Pruthvi was confident enough to give it a try and ask her for an interview and it worked out,” Leonie adds.

The industry is renowned for its high level of competition among filmmakers and creative artists, which can really have a negative effect on students breaking into the industry. Something that caught both students in disbelief was the advocacy and reassurance given by Gurinder during process.

“I think one of the reasons why she agreed to the interview with Pruthvi was the fact that she could see Pruthvi’s passion for her and her projects from the beginning when they first met at [the] screening,” Leonie says.

“She also told us that she could see Pruthvi going far, the reason she met us that day.”

Pruthvi adds, “Ambition, inspiration and confidence all comes with a little support to break through into the industry and from there, the sky becomes the limit.”

This project is a memento and legacy for both student on their departure from Manchester Met and definitely a learning experience to be taken into their future adventures.

Leonie feels it made her realise again that you should always believe in yourself and be confident enough to approach people for interviews or other collaborations.

“The worst thing that can happen is them saying no or not responding to you, which is not that bad,” she adds.

Pruthvi said that this was the highlight of his years at Manchester Met and is pleased that so many people enjoyed the moments with him.

“Siddra and Adnan’s story completed the picture I wanted – the reality of our challenges and the personal journey they both have been through. I really wish the best for them all. I’m continuously see Siddra grow as a podcast journalist and I love collaborating with her whenever she has an idea,” he says.

Pruthvi added that Covid-19 really had an effect on his final days at Manchester Met and that it was worrying to see all his friends depart suddenly.

“It was a shame Leonie had to go back to Germany so soon,” says Pruthvi.

“I really wanted to sit down and watch the footage with her, but it just goes to show that nothing really can stop you from achieving your dreams.”

Pruthvi’s documentary will certainly open up conversation on a new topic within the communities of Manchester Met and will act as an inspirational example of how far students can go.

You can watch the full eight minute feature over on Pruthvi Khilosia’s YouTube channel.