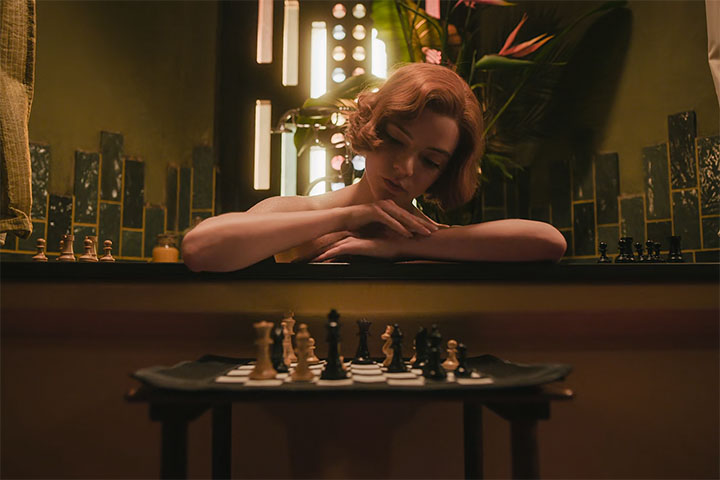 Anya Taylor-Joy stars in Netflix’s new miniseries The Queen’s Gambit, based on the 1983 novel of the same name by famed novelist and short story writer, Walter Tevis, known for works such as The Hustler, The Colour of Money and The Man Who Fell to Earth (all of which have been adapted into films). The series follows the life and struggles of Beth Harmon, an orphaned female chess prodigy navigating her way through a male dominated sport during the Cold War era. The Queen’s Gambit is an indulgent exploration into the 1960s while tackling themes of loneliness, addiction, and sexism.

The series was streamed by 62 million households within the first month of its release, the most ever for a scripted limited series on Netflix. Now the streamer’s most-watched scripted limited series of all time, it is easy to see what The Queen’s Gambit does right. Visually it is pleasing, the show gets the full-blown Netflix glamour treatment. Capturing the vibe and vibrancy of the 1960s. The set design and costume design are to be applauded; you cannot help but feel lost in the era.

Anya Taylor-Joy gives a stand-out performance, walking the line between damaged introvert and glamourous chess icon. She is joined by a cast which includes: Marielle Heller who gives a brilliant and desolating performance as Harmon’s adoptive mother, as well as Thomas Brodie-Sangster and Harry Melling among others all putting in convincing performances.

Unfortunately, however, the series fails to pack a punch with the storyline often at times falling short of the mark. A very promising opening episode, in which we are given Beth Harmon’s back story appears to lead into a very enjoyable seven episode stretch. However, the show falls to a stalemate. The episodes become rather repetitive and begin to follow the same story arch of: Beth encounters a problem, Beth plays some chess, Beth wins and so on. The series would have benefited from some more experimental writing, rather than just playing it safe. Most of the enjoyment comes from the acting performances, the Cold War-period aesthetic and often at times feeling as though you are simply experiencing the era rather than an actual story.

As well as structural issues, the series mostly shows a reluctance to properly explore the issues it begins to raise. You have a drug addicted orphaned girl in a sexist society trying to break into a male dominated sport and yet The Queen’s Gambit is remarkably timid in its development of these themes. We witness Harmon’s addictions to prescription drugs and alcohol play out. However, the series fails to open an interesting enough dialogue about addiction and it’s devastating effects.

The same criticism can be applied to the series for its exploration of gender and sexism. Sure, its nice to see a young woman in the 1960s breeze through sexist society and break into the boys club of chess with almost no difficulty. However, it plays out like a fairy tale and it just doesn’t seem realistic that Harmon would encounter almost no sexism. Frankly it appears dismissive to the issue which is still prevalent within today’s society and especially in competitive sports. Netflix missed an opportunity here by shying away from the topic.

Writing aside, The Queen’s Gambit is still an enjoyable watch and the glamorous 1960s aesthetic and accomplished performances from it’s cast do just enough to drag it over the line.

The Queen’s Gambit is available to stream now on Netflix