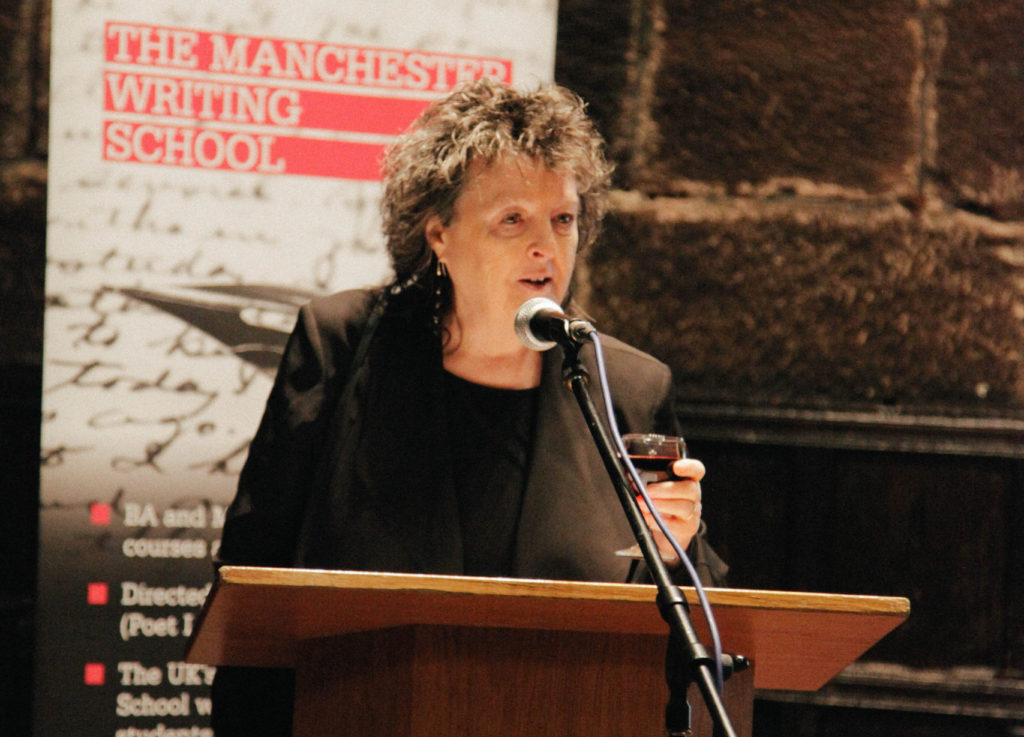 The winners of the Manchester Writing Competition 2019, the UK’s richest prize for unpublished work, are Momtaza Mehri and Tim Etchells.

Writers from all over the world gathered at the gala award ceremony, in Chetham’s Library to celebrate those shortlisted for the Manchester Poetry Prize and the Manchester Fiction Prize.

The competition features the UK’s biggest literary awards for unpublished work and saw both writers each take home a £10,000 prize.

James Draper, Manager of the Manchester School of Writing, and Matthew Frost, a member of the board of trustees for the Manchester Literature Festival, hosted the ceremony.

They greeted the gathered crowd of nominees, families and judges and invited shortlisted writers to read their work.

Draper praised the awards for having shown the “breadth and depth of contemporary literature”. Frost emphasised that the judges of the competition were assessing the submitted works with no indication of the writer’s identity: “It’s like a literary version of The Masked Singer.”

Malika Booker, the Chair of the Poetry Judging panel, shared a few words on the high quality of entries received: “I urge you to go online and read this ferocious poetry. My speech doesn’t do it justice.”

The shortlisted writers then took to the stage to read extracts from their work. The first group of writers were nominated for the Manchester Fiction Prize, and began with Elaine Chiew, a writer from Singapore, reading a segment from her new work, ‘Welcome to the World of the Best Scenario’.

When asked how she’d like to spend the prize money if she won, Chiew told aAh! Magazine, “I would probably like to spend part of it setting up a bursary. I teach short fiction to young children, as well as to teenagers. I would like to set out to use the money to encourage talent.”

Following Chiew was Lauren Collett, reading ‘We Are Not Built For This’ and then, Tim Etchells with his short story, ‘Strange Weather’.

Speaking to aAh! Magazine before the event, Collett expressed her gratitude to have been shortlisted, “I was overjoyed. I couldn’t believe it, it’s the biggest thing that’s happened to me as a writer, by far. The experience has been unbelievable, I’m so proud.”

The writers shortlisted for the Manchester Poetry Prize then had their chance to share their work. Malika Booker read Katie Hale’s poem ‘My Name Is Monster’ on her behalf, as Hale was unable to attend the evening due to being on a writing retreat. Momtaza Mehri and Lauren Pope also read their work out.

“I was overjoyed. I couldn’t believe it, it’s the biggest thing that’s happened to me as a writer, by far. The experience has been unbelievable, I’m so proud.”

Reflecting on the event being held in Manchester, Mehri told aAh! Magazine, “This is a city I always love returning to. It’s really significant for me because I’ve always submitted to this Prize as almost a yearly tradition, never really expecting to be shortlisted.”

Pope, who runs a summer school on creative writing and literature at the University of Edinburgh, expressed her regret that she couldn’t come to Manchester more often: “I’ve driven through a few times, I’m really sad that I can’t spend more time here. It seems like an amazing city.”

Draper invited Sakinah Hofler, former winner and one of the judges for this year’s competition, to say a few words. Hofler was shortlisted for the Manchester Poetry Prize in 2016 and went on to win the Manchester Fiction Prize in 2017.

The remaining nominees for the Manchester Fiction Prize took to the stage for their readings, with Louise Finnigan reading ‘Sirens’ and Molly Menickelly reading ‘Magicicada’. Jonathan Gibbs stepped in to read Ian Sample’s ‘Barely Audible Creatures’, on Sample’s behalf, as he was unable to attend the evening.

Finnigan, who’s a teacher in Greater Manchester, told aAh! Magazine, “A lot of the students I teach are very aware of the Manchester Writing School and the work they do. A lot of them come from working-class backgrounds, and they’re becoming increasingly aware that it’s something they can get involved with.”

“This is a city I always love returning to. It’s really significant for me because I’ve always submitted to this Prize as almost a yearly tradition, never really expecting to be shortlisted.”

Menickelly, an English teacher from the state of Virginia, USA, explained how her job pushed her to enter the competition: “I work with students of an advanced level to help them improve their writing. Working with them actually emboldened to start sharing my own writing with the world, so that’s what brought me here today.”

The final readings of the Poetry Prize were led by Karisma Price, reading ‘All Day We’ve Been Speaking In The Dark’, followed by Marvin Thompson reading ‘The one in which my children discuss jazz while we set out to watch The Lego Batman Movie in Blackwood.’

Based in New Orleans, Price had never been outside of the USA before coming to Manchester for the award ceremony.

She said, “I’ve been here for two days so far, and it’s been very welcoming here. I like it.”

Thompson, originally from Tottenham and now living in Wales, told aAh! Magazine of his gratitude to having been shortlisted.

“This is one of the most prestigious prizes for poetry in the world. I feel privileged, and I’m proud that my work has taken me here,” he said.

“A lot of the students I teach are very aware of the Manchester Writing School and the work they do. A lot of them come from working-class backgrounds, and they’re becoming increasingly aware that it’s something they can get involved with.”

The poem, based on the experiences of the Iraqi people living under constant conflict, is a significant one for Al-Jubori, who told aAh! Magazine before the event, “I’m here to show my support to anybody who would stand with my country, and stand with the voice of freedom.”

David Allen Sullivan was not able to attend to read his work, ‘Outside Mosul, the Land’, so his colleague Amal Al-Jubori read it on his behalf in both English and Arabic.

He added, “All of these stories expand what is possible with a short story.

“The story of a short story is richer, fuller and more vibrant for all of these stories having been written.”

Before opening the golden envelopes to reveal the winners, Duffy spoke of why she established the competition. She said, “We wanted to extend our family outwards, to find new writers. I wish we could £10,000 to all 12 of you.”

“This is one of the most prestigious prizes for poetry in the world. I feel privileged, and I’m proud that my work has taken me here”

Speaking to aAh! Magazine as the event closed, Etchells shared his response to his win: “I feel very much in shock still. I’m surprised, delighted and thrilled.”

“This money allows you a way to buy time, and allow me to focus on some writing projects. It’s thrilling in that sense,” he said.

“It’s also thrilling to be involved alongside such an amazing shortlist. I’m really humbled to be part of such a diverse shortlist.”

Mehri also expressed shock at her win: “Once I’ve processed it, it’ll be amazing to look back at having been included in this wide extending family of people who were shortlisted.”

During her acceptance speech, Mehri had brought her mother on stage, a moment that meant a great deal to her. She said: “She never comes to any of my things, so it’s crazy to me this is the time I actually won. She’s been fuelling my love of literature from a very young age.”

All of the entrants’ works are available to read here.